Laying it All Out: The Cover and The River

Still not comfortable with the new SB Nation United look for Canal Street Chronicles? You'll learn to love it once you read this tutorial and get a better understanding of just how awesome it actually is.

Share All sharing options for: Laying it All Out: The Cover and The River

In an effort to get everyone more acquainted with our new surroundings, I've decided to provide a short series of tutorials that will further detail just how things work around here. My hope is that a better understanding of everything in front of you will lead to a more enjoyable experience.

To get things started we're going to discuss the basics of our new layout, specifically the two main sections of our front page: The Cover and The River.

This is probably my favorite new toy under SB Nation United. The giant, ever-changing graphical layout you see right in front of your face when you first come to Canal Street Chronicles actually has a name. It's called the Cover.

But don't be overwhelmed by the cool looking headlines and all the beautiful, bright pictures. The Cover is just a collection of the most recently published stories. Instead of everything being published in a straight line, one on top of the other like the days of old, the most recent stories get featured in the cover.

Remember how you used to have to scroll down the page to get to a post that was published earlier in the day? Well now they're all right there in front of your face in one easy to find place for an extended amount of time. And it looks freakin' awesome.

The Cover doesn't always have to be the most recent stories, though. If a certain story has a lively discussion happening in the comment section, we can leave it in The Cover so the discussion can continue. Even cooler, we can also put stories from other SB Nation NFL sites right there in The Cover so you're reading everything relevant from around the network. Booyah!

By now you've probably noticed that The Cover has many different looks. That's because not only do Hans, Satch and myself have complete control over what stories appear in The Cover, but we also control how many stories are included and how they're all laid out. In fact, there are five different possible layouts. Let's meet them. 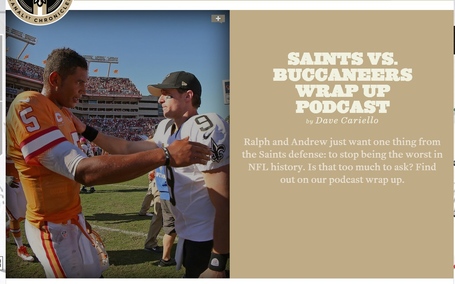 One Up - One single story is the star of the show. You're really only going to see this if there is big news or someone writes a really awesome feature story. 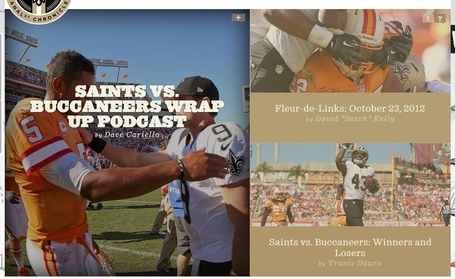 Three Up - Definitely one of the most often used layouts. It fits three stories nicely and highlights just one. 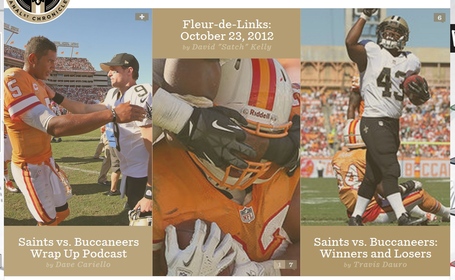 Triple Vertical - Another three story layout, but with a balanced look and no particular story highlighted. 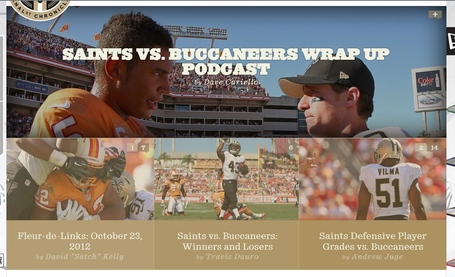 Four Up - Another one of the most popular layouts. Highlights one story at the top. 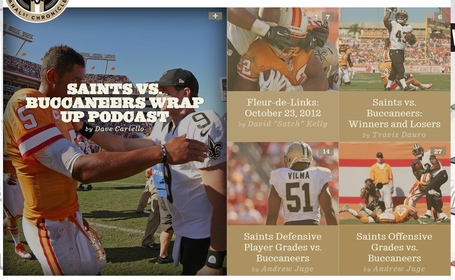 Five Up - When there's just so much damn good content that can't be missed. Highlights one story.

Now this was educational. But what happens when a story leaves the Cover? Well, it floats on down The River.

To put it simply, The River is the old Canal Street Chronicles layout with an updated look. It starts just below The Cover. There you will still find FanPosts, FanShots, team info, sections, tagline, archives, masthead and community guidelines just like the old days.

Stories are also posted reverse chronologically in one line like you're used to. Those stories reach The River once they're moved off The Cover, which means the first story at the top of The River is most likely at least a day old. FanPosts and FanShots can be inserted anywhere into The River. 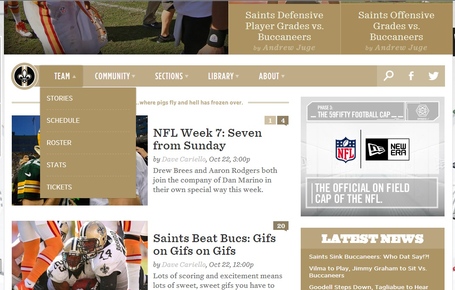 Other than that there isn't much else to The River. So I'd say that about "covers" all of the layout basics. See what I did there? I hope this post was helpful and informative for many of you. If this post helped even just one person, than my work here is done.

Our next tutorial will cover StoryStreams and Hubs. Ooooooooh.