A Who Dat Halloween

Share All sharing options for: A Who Dat Halloween

Halloween got off to a frightening start a few days early for Saints fans this year. The Saints decided to show up to Denver as pumpkins on Sunday night and Peyton Manning promptly carved and lit them up. Usually it is the Saints offense that sends chills down the opponents spine, but this year it is the defense that is truly scary; like horrifically bad. The good news is the players left Denver in one piece, the bad news is one more Halloween haunt awaits Saints fans this coming Sunday night as well.

Fresh off their filming of a snuff film in Denver, NBC takes its cameras to CircusDome™ in Atlanta as the undefeated Falcons host the perplexingly relevant Cowboys. Yes, after enduring the torture of last Sunday night, Who Dat Nation has to endure two of their biggest rivals going head to head in primetime. A haunting week of hype and hoopla over Romo vs Ryan, the anointed one vs the MVP, on and on and on. I'll just call it what it really is, 1-3 playoff record vs 0-3 playoff record, now that's scary.

Tony Romo will be seen wearing his usual halloween costume: "Player ready to "turn the corner." And Matt Ryan his, "Player ready to win a playoff game." The Saints two most long-standing geographic rivals facing off against each other has me thinking of the song "Stuck in the Middle." Clowns to the left of me, Jokers to the right. Yes, one of them will lose, but the other will win, taking away one of our potential joys of every Sunday during the NFL season. 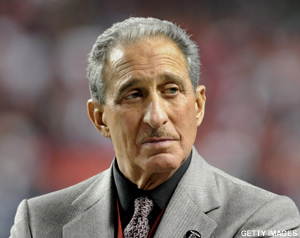 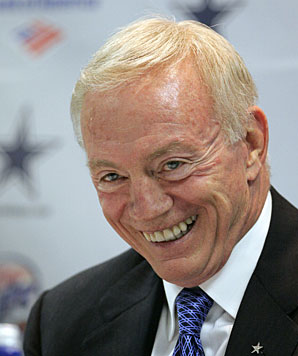 Oh dear God, the horror!!! Make them stop, please, they're scaring the children! The NFL's two nosiest, most annoying, know-nothingest owners face off against each other in one last Halloween scare. They will do what they always do in the fourth quarter and stand over their head coach's shoulder like they are going to give some sage advice or bring forth some revelation on the game unseen by the professionals themselves. "Have Romo go shotgun on 4th and short , great call Jerral!" "Go for it on 4th and 1 in our own territory in OT, fantastic advice Mr. House of Wax!"

These two owners have a need for attention and credit that are second to none. The Saints well-jowled owner Tom Benson may inadvertently celebrate missed field goals but at least he has the decency to stay in the owners box and stay out of Sean Payton's way on the sidelines. The only times you'll ever see Benson on the field is after a truly important playoff victory, parasol in hand.

So yes, Who Dat Nation will have to suffer through one last Halloween trick this coming weekend, but hopefully come the next holiday we will have something, anything to be "thankful" for. I'd be thankful to have Roger Goodell and Gary Bettman spend the rest of their lives as concussion test dummies for what they have done to their respective leagues. Happy Halloween Who Dat Nation!

Bad Saints and no hockey makes Wallace a dull boy.

Bad Saints and no hockey makes Wallace a dull boy.

It's going to be a long winter.