Angry Who Dat's Bender in Denver: The View from Section 516

Everyone's favorite pissed off Saints fan shares his action-packed weekend experience in Denver for the Saints vs. Broncos game this past Sunday night.

Share All sharing options for: Angry Who Dat's Bender in Denver: The View from Section 516

"Angry Who Dat, you going to write this thing before the next game kicks off?"

Sorry, Dave. I didn't get back until Monday, and I had to spend a day reacclimating to the low attitude (that clearly worked for the Saints), and then I thought about the game again, so I needed another couple days of drinking. I think I’m ready now.

If you didn’t realize, because you’re lame and you refuse to use twitter (or just refuse to follow me on twitter), I made the trip out to Denver last weekend for the game, and it was a great time. Dave has asked me to write sort of a road trip recap, and I said, "yeah, sure, I can do that," and then I didn’t, but now I am.

It was my fifth road trip to see a Saints game (Kansas City 2008, Dallas Thanksgiving 2010, Atlanta 2011, Tennessee 2011). This was the fourth with fellow traveling Saints fan @RafCastillo79. If you have the means and the time, do some road trips. Seriously, people. We travel well, and most of that crap you read on the message boards about away fans being terrible meany-heads is just that: crap. I’m not saying there are not some terrible venues, but I think the whole thing is overblown by hypersensitive people.

Anyway, the plane landed at DEN about lunchtime Friday. If you’re not familiar, DEN is in Western Kansas. I don’t have my GPS with me to check, but just estimating, it’s about a 6 ½ hour drive from the airport to downtown. Seriously, Denver, WHY?

And it was cold as hell. The high Friday was around 35.

"@SportsCajun: LOL you should try Alaska that’s warm compared to Alaska because Alaska’s really cold and it snows a lot in Alaska too. Alaska."

Got it, man. But 35 is cold. And dry. And thin. Within two hours I considered snorting moisturizer as a viable option.

We hit the bars Friday night, and we had a great time. Two observations:

1. Medical marijuana is not just legal. It’s encouraged. And it’s not medical. I think we all knew those things, but the level of acceptance of the stuff in Denver is mind-blowing. Like light up right out on the street. Like pack a f***ing pipe at the bar so you don’t have to do it outside when your fingers are too cold. I experienced a little culture shock at these aspects of the Denverenian culture.

I don’t get in to that kind of thing, of course, obviously, but I hear from folks who do that it’s quite fun as compared to the over-the-counter variety.

2. Everyone has ties to New Orleans. What the hell is this about? Of course, we were wearing Saints gear, and going to Saints bars, so it’s natural to run into some displaced New Orleanians. But these folks had real ties, not vacation stories: a Broncos fan had married a girl from New Orleans, and the bartender’s brother lives there now, and the hotel valet’s parents retired in Nola, and the guy working the counter at Taco Bell got his degree at LSU. 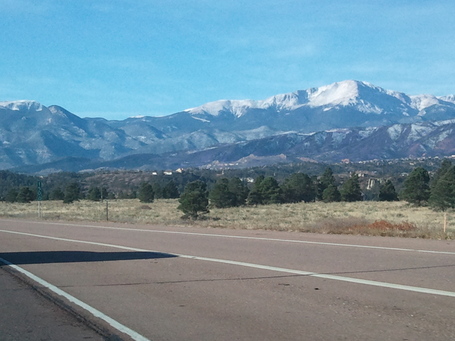 Saturday morning, we woke up early and took the drive down to Colorado Springs, home of Pikes’ Peak. Folks, holy s***. 14,000 feet. I couldn’t breathe even more than I couldn’t in Denver – so much more not breathing that I turned a little pale and I was ready to go in about 5 minutes. The wind chill was 18 below zero, according to the tour guide. Whether that was accurate I don’t know. But I’m from Mississippi, and anything below zero is ultimately too stupid for me to have to deal with.

It was worth it, though. It was almost overwhelming just being up there, on top of the mountain, looking down on everybody and everything else, trying to take it in and enjoy every second, knowing that it would only last a little while and before very long I’d be hurtling right back down to Earth with everybody else. Like a Falcon, am I right?! AM I RIGHT?

Oh, come on, that was a nice setup. There’s no such thing as a bad Falcon joke. Fine. Anyway, if you’re ever in Colorado, go there. 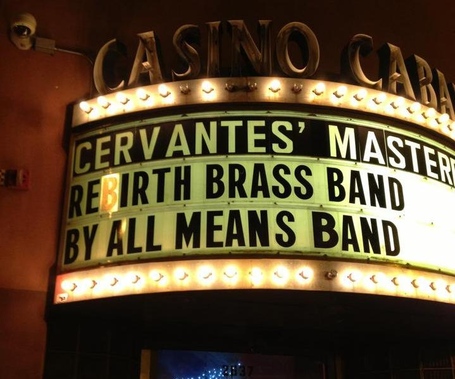 Of course, when Rebirth left the stage at about 1:30 after putting on an awesome show for what was basically the same crowd they get back in New Orleans, Denver was dead. That town shuts down at 2 a.m., folks. But there was still this: 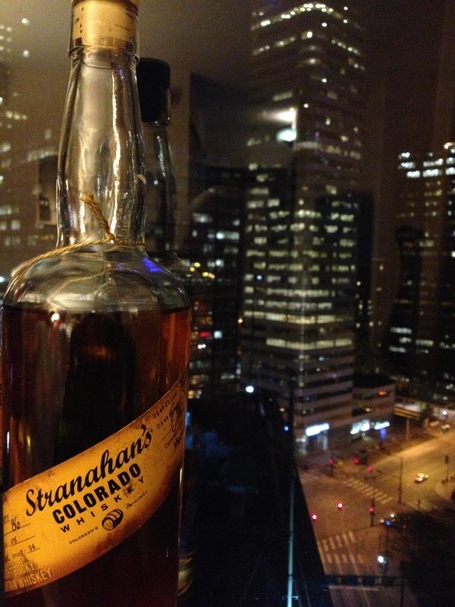 Which brings me to the purpose of the entire trip – Sunday. That segue isn't as awkward as it seems. Really, that bottle took me right to Sunday. Amazing stuff. Tailgating was fun, even if Stoney’s did run out of beer for a few scary moments for the poor employees that worked the stadium site.

I drank Stoney’s last shot of Crown, and yes – when you polish off a restaurant’s supply of whatever you’re drinking, it does justify an entire paragraph.

We hoped the game would provide a unique atmosphere, and it did. Sort of. We hoped that on a Sunday night in Mile High we would experience that raucous home crowd that we’ve missed in our other road trips in which we took over Dallas as if it was our home, booed Falcon fans out of their own house, and occupied a section of a half-empty stadium in Nashville.

Mile High was packed, and we were relatively alone as Saints fans. But from my view in 516: 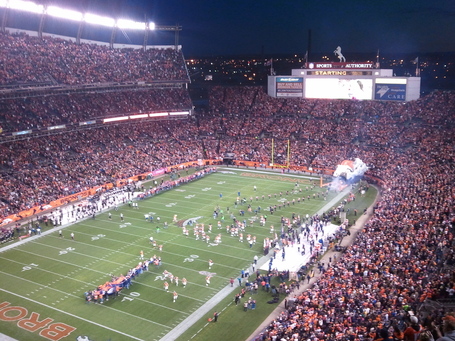 The sea of orange just looked bored with the entire affair. It was loud, I guess – you can’t really tell from the upper deck of an open-air stadium. But, alas, the personality, the uniqueness, the raucous atmosphere away from the Superdome: we still haven’t found it.

I’m not going to come down on them too hard, because, well, we got the s*** stomped out of us. I just thought they would enjoy it more. I think I celebrated the first-quarter turnover longer than they celebrated a single touchdown. I received not one second of hazing. None. Very disappointing for a guy who basically begs for a little trash talk.

But, you know, now that I think about it, I wonder if maybe they just felt sorry for us. Maybe it wasn't a raucous crowd because they expected to win. Maybe the touchdowns didn't require a lengthy celebration because they were expected and numerous. I think back to past years when we've beaten obviously inferior teams by a wide margin and I realize the Superdome wasn't as loud those days either. Maybe once the game was in hand I did relax a little and enjoy myself. Maybe I did quiet down on defense.

Because, really, who gets all that excited about scoring touchdowns against the worst defense in the league?

Denver was a blast, though, and I met some great people. Well worth the trip in spite of the game, as always. See you in Boston next year!