Quarterbacks, running backs and wide receivers were in the spotlight at the NFL Combine yesterday - even more specifically Robert Griffin III and Andrew Luck - none of which are a position of need for the Saints this off-season so excuse me if my interest is tempered. Still you never know who the Saints might take on draft day so it's always good to have a working knowledge of the entire draft class. Which is why I've got a quick recap of all the highlights, news, and notes from yesterday's action after the jump.

Today is a different story, though, as linebackers and defensive lineman take to the field for workouts at Lucas Oil Stadium. Grab your popcorn, Saints fans, and pay attention with your stopwatch close at hand, because hopefully the team will be drafting one of these players with their second round selection, and perhaps later round picks as well. At least we can only hope. Use this thread all day to chat about the linebackers and defensive lineman showing their stuff today.

Robert Griffin was without question the story of the day, and he didn't even throw. Didn't have to after posting an impressive 4.41 40-yard dash time. Just in case you didn't know, that's a fast time for a quarterback. In fact, it was the fastest at the combine since 2006, when Reggie McNeal ran it in 4.35. But I am going to assume that most of you knew that. Unlike NFL.com, who assumes you know nothing about the way time works: 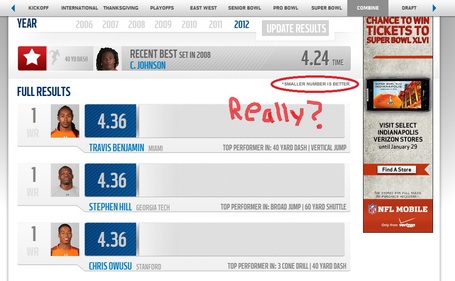 Here are a few links with basically all the same information:

NFL.com news: RGIII leaves Indy as undisputed winner of NFL combine - Speedy feet and an engaging personality made Robert Griffin III the unofficial champion of the combine. And Jeff Darlington points out one team that really benefited from the QB's emergence.

Mayock, Browns among those who wanted RGIII to throw - Includes video interview with Robert Griffin III.

But not to be outdone was Stanford quarterback Andrew Luck, the consensus number one overall pick in this years NFL draft. He posted a fairly speedy time of 4.67 himself and had the best broad jump of all quarterbacks. His overall numbers are comparable to Cam Newton's last year. Here's some reading on Luck:

Luck's athleticism on display at Combine - ESPN - Andrew Luck is constantly praised for his accuracy, football intelligence and leadership intangibles, but on Sunday at the NFL Combine he proved that

NFL.com news: Combine observations: Luck, RGIII impress without throwing - With most of the attention on a different QB on Sunday, Andrew Luck reminded everyone why he'll be the No. 1 overall pick in the draft in April, Steve Wyche writes.

Other than the two poster boys of the 2012 NFL Draft, it was really only wide receiver Stephen Hill from Georgia Tech, who stood out and really made a name for himself yesterday. Hill ran a combine best 4.36 40-yard dash and looked very good catching passes during position drills.

NFL Videos: Running up the Hill - Which wide receiver could provide the most value during the draft? Steve Mariucci is impressed with a former Georgia Tech WR who turned heads during the combine.

Here's an overall recap of some notable standouts from Sunday:

NFL.com news: Luck, RGIII, Hill show off athletic chops in Indy workouts - Everyone already knew Andrew Luck was one of the top QB prospects, however Bucky Brooks writes Luck's dazzling performance Sunday was one of the highlights of the day's action at the NFL Scouting Combine.

Those are all the headlines from yesterday's combine action. As always, you can click through a fully sortable Combine results database with NFL.com's Results Tracker.