Share All sharing options for: NY Giants Powered by Pizza

It's a ritual that dates back to Michael Strahan, who started ordering pizza from Umberto's four years ago during their previous Super Bowl winning season. Yesterday, with the Giants preparing for another big game away from home, the famous Long Island pizzeria kept the tradition alive by hopping on a plane and delivering 15 pizzas to the team all the way in Indianapolis. It's been all over the local NY news and was big enough news to make Yahoo!'s front page slideshow, right next to the story about Tom Brady's athletic sisters (see right).

All of this, of course, has absolutely nothing to do with the Saints so you're probably wondering why the hell I'm even mentioning this. But it has everything to do with football and food and I believe it was the ancient and wise poet Meatloaf who once said, "Two out of three ain't bad."

As you might have guessed, there's another reason I've decided to devote an entire front page post to this topic. I'm a huge f*@#%$ Umberto's pizza lover!

Most of you know I grew up on Long Island, which inherently means I grew up eating their famous pizza. And, to put it quite simply, they make the greatest pizza that's ever been made in the history of pizza making on this planet. Yeah, I just said that. You can go ahead and name your favorite pizza place and try to convince me otherwise but I won't be listening, because I know you're wrong. Unless your favorite pizza joint also happens to be Umberto's. If you've never tasted the cheesy, crispy, garlicky goodness of a Grandma slice, you have no room to talk. Just ask Michael Strahan.

Am I biased? Yeah, a little. Am I friends with the family that owns the restaurant? I might be. Did I work at two of their establishments on two separate occasions in my younger days? It's possible. Do I love it so much that I have unaltered personal photos of a Grandma pie talking to me? 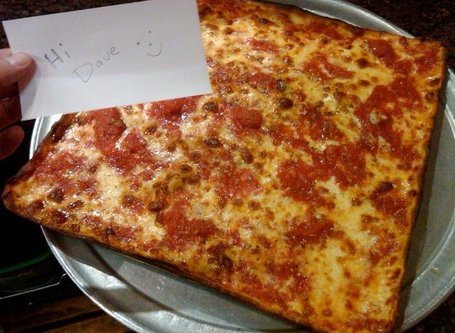 But if it wasn't as good as I claim then they wouldn't be voted Long Island's best pizza year in and year out, they wouldn't be the best thing that Rocco DiSpirito ever ate and a bunch of very large and very hungry men wouldn't have it delivered every Friday for years now across state lines into New Jersey.

I know this has nothing to do with the Saints but we're all New Orleanians either in actuality or at heart, which means the other thing we're all passionate about aside from football is food. And Umberto's, my friend, is as good as food gets. So the next time you're within a 50 mile radius of Nassau County, NY, be sure to hit up Umberto's and see what all the fuss is about. I guarantee you won't be disappointed.

Also, as Saints fans, I'm sure we can certainly relate to not only the culinary but the superstitious tendencies of the pizza-loving Giants. After all, where would Drew Brees be without his cheesy mac?