Hey, folks. I've never really contributed much to the site, other than the occasional bit of snark. I'm an archaeologist, and as much as I'd like to pretend I'm Indiana Jones (or, if I'm in the mood, Lara Croft), I spend as much as 80% of my time (in a slow year) in the florescent hellhole that is my lab and office, writing technical reports. With that much time writing paragraphs that often end up being as dull as the dirt they describe, the serious stuff is just more than I can do most nights. I imagine its a little like being a prostitute and trying to have a dating life.

Which is why I was a little disconcerted to find myself actually thinking about the recent trends of the league regarding injuries, penalties, and fines. I believe many of you know this as the "let's put skirts on ‘em" phenomenon. The league has made the players' health a priority these last few seasons, because, as we're all aware, they care deeply about them. [The lawsuits, of course, are irrelevant.] This trend has culminated in the godawful mess in which we find ourselves now-the perfect storm of macho bullcrap, holier-than-thou pontification, lies, legal action, and butt-covering known as Bountygate. 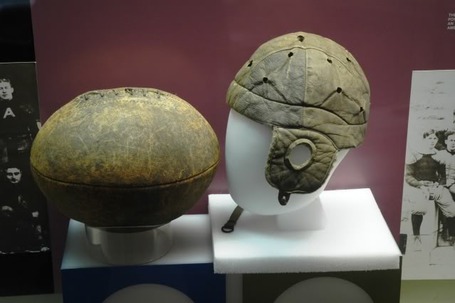 Because nothing says "I value my brains" like a leather cap. via i226.photobucket.com

Football, a sport historically played by young men with more aggression than sense, is no stranger to the conflict between our more civilized influences and the part of us that says, "rip his head off and s--- down his neck!" Metaphorically speaking, of course. This conflict can be traced as early as 1839, when an editor for the Washington, D.C National Intelligencer pronounced it "improper and... a dangerous amusement" (22April1839:3), and advocated outlawing it there as it had already been in Baltimore. But American football became ever more popular, and was frequently played in camp by the young men who fought in the Civil War. When many of these young men went home, sadder, if not wiser, they took football with them, and the succeeding years saw the popularity of the sport explode. The game was rough; pads were virtually non-existent, and mass formations like the flying wedge led to scrums that were little more than brawls with an oblong ball in the middle. However, by the 1880s, it seemed that society was ready to put the savagery of the 1860s behind them. More and more accounts began to appear in the papers of injury and death as a result of football, particularly in the college game. By the 1890s, the fatalities had begun to mount, and the media frenzy surrounding it had begun in earnest. A Georgetown quarterback was paralyzed in 1894 when an opposing defender punched him, knocking him to the ground, and a second player kicked him in the spine. In that game, five of eleven Georgetown players were injured and had to be helped off the field. Then, on 30 October 1897, a young defensive player for the University of Georgia, Von Gammon, threw himself into a formation of University of Virginia players, and was fatally injured. Football is killing our young men, came the cry! And they had a point. Of course, the fact that the doctors on the scene injected morphine into Gammon's chest in an attempt to revive him probably didn't help much.

A measure banning football from the State of Georgia was passed by a healthy margin, but vetoed by the governor at the request of Gammon's mother, who begged him not to abolish the game her son loved. However, all over the nation, politicians were jumping into action to protect their phoney-baloney jobs. In the decades surrounding the turn of the century, the game was banned in Chicago, New York, Utah, and Atlanta (where it may still be banned, judging by the way they play the game). Measures outlawing football were introduced in Massachusetts, Vermont, Nebraska, Pennsylvania, Arkansas, and Illinois.

Meanwhile, things were getting ugly. In the years between 1901 and 1909, there were an astounding 113 deaths and at least 1,937 serious injuries. Leather helmets, although in use, were no more than caps, and probably viewed the same way that hockey players view mouthguards. In 1904 alone, there were 14 deaths, broken out like this:

The New York Times, Cleveland Plain Dealer, Chicago Tribune and others launched anti-football campaigns, but the sport only became rougher. In 1905, the fatalities were up to 18, with another 159 injuries, all in a year when the number of college players was about a fifth of what it is today (source). In that year, Teddy Roosevelt inserted himself into the conversation, calling the heads of the major college powerhouses (Harvard, Yale, and Princeton) to the White House for a taste of the Big Stick (not like that-you're sick). Roosevelt was not a weenie; a physical fitness fanatic, he boxed, hunted, rowed, cowboyed, soldiered, and generally shed a fair amount of sweat and blood (his own as well as others') through the years. He had played the game himself. But Teddy did not like what he was seeing in our institutions of higher learning, and told the universities that he would ban the sport by Executive Order if it wasn't cleaned up. [Bob Symon and Frank DeFord have nice articles on this interval of football history, for those interested]. 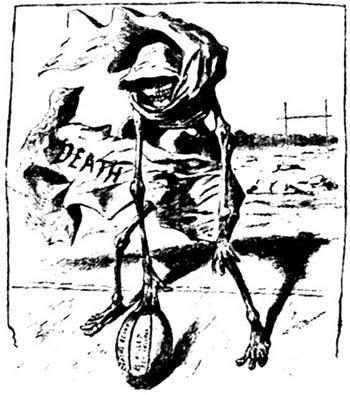 Subtle. Cartoon from 1893,via www.oldmagazinearticles.com

Faced with a serious public relations problem, not to mention the threat of losing a major source of revenue, the colleges formed the American Football Rules Committee, the precursor the NCAA. Changes were made in the coming years: mass formations like the flying wedge were outlawed; the neutral zone was instituted; a limited forward pass was allowed; and gang tackling and flying tackles were banned. The first-down marker was now ten yards away instead of five, and there were now seven men required on the line of scrimmage. In 1906, a paltry six collegians died, three from fistfights that broke out in Ivy League games. Would changes have been made without Roosevelt's intervention? Probably not. Nobody wants to mess with the goose that lays the golden egg, and all that.

But the game fought back. The "Minnesota shift," among other strategies, was instituted to catch defenses off guard and out of position. By 1909, the death toll was back up; between 26 and 33 players died that year, depending on who you asked (source). 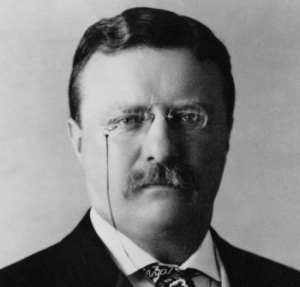 Tough Teddy. Roosevelt was shot in the chest during a political speech in 1912. He finished the speech before going to the hospital. via www.directoid.com

In 1910, the NCAA responded again, expanding the role of the forward pass, pulling defensive players off the line, and paving the way for the modern game. In 1921, clipping was outlawed. Equipment changes began taking place; the old leather cap, designed to protect the ears, was replaced by more padded versions to actually protect the skull in 1917. Plastic helmets were available by 1939, and facemasks followed not long after. Shoulder pads came into widespread use in the 1950s (source), reaching the peak of their popularity in the early 1980s when the Talking Heads recorded Stop Making Sense. Another welcome innovation, the cup, was introduced in 1927, (although many Minneapolis-area players complained it was difficult to drink from).

In another era, this guy would have killed more men than Cecil B. Demille. via i297.photobucket.com

Now you might think that the resultant decline in death toll of the early- to mid-twentieth century would have met with universal acclaim. And you'd be wrong. The "let's put skirts on ‘em" crowd has been around for a long time. In 1906, A.L. Smith of Penn commented, "The game is practically spoiled by all the changes and the only play that will be used this year is the punt" (Philadephia Inquirer 7Oct1906:1). After the rules regarding shifting formations and men-in-motion were enacted in 1922, fans of Notre Dame (and other schools) grumbled, as they had enjoyed considerable success against the top teams in the country with these tactics. Head Coach Charles B. Moran of Centre College dismissed the new rule changes of 1921--which forbade clipping among other things--as "a fad that would last only one year, probably" (Colorado Springs Gazette 2March1922:19). Not exactly Nostradamus. An editorial in the Kalamazoo Gazette summed up the situation with simplicity. Following the football death of an Annapolis midshipman and a West Point cadet within two weeks in the 1909 season, the writer noted:

The question then is whether denatured football, that is, football without the risk of broken necks and backs, would be worthwhile. ...The rooters will probably say not, and the players will agree with them (1909:4).

Ultimately, we are humans (well, most of us--the jury's still out on this guy]. Conflict is in our DNA. This includes the conflict between our better natures and our basest instincts. Thankfully, no one's dead this time around, and the sport is in no particular danger of being banned. Bountygate, IF all of the charges and rumors prove true, is just the latest example of the sport trying to publicly clean up its act by curbing the "improper" tendencies that have always made it so popular (and profitable). There is a certain amount of hypocrisy involved with this, obviously. It's ugly, but it's really nothing new.