In the Olden Days, I used to get the daily newspaper, and one of my favorite things to do was to take a lazy Sunday morning reading the whole thing over coffee and breakfast. And on those Sundays, especially when I was a child, I'd really look forward to reading the bonanza that was the full-color stand-alone section of the comic strips, the Sunday Funnies.

Times change, and I no longer take the daily paper, but I'm hoping to recreate some of that vibe and enjoyment for you today and every now and again by bringing you a small collection of humorous Saints/NFL stories that struck my funny bone...

Make the jump for the chuckles, and watch out for the SNORK factor! As you read these, you may want to imagine the slide whistle sound or the comedy club drummers' rim shot in your mind.

(3:15 pm EST Update: see addition to first section below for due credit given where credit was due...)

First up is an actual cartoon (how perfect is that!), albeit an editorial one, by Steve Kelley from nola.com (UPDATE: Special CSC Shout-out to my MAN Chad, for finding this first): 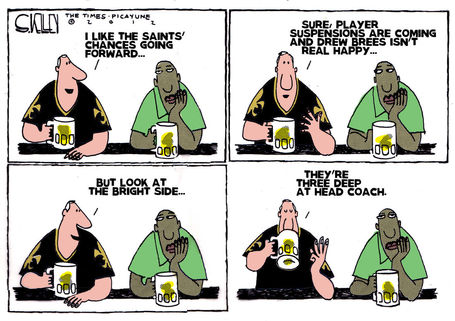 Next, we have a piece from Steve Ryan of Grantland.com in which he takes a lighter-side look at Thursday's happenings in sports, leading off with the Saints:

The New Orleans Saints have named top assistant Joe Vitt interim head coach during Sean Payton's year-long suspension, despite the fact that Vitt will serve a six-game suspension of his own to start the season. During those six games, the Saints will be led by offensive line coach Aaron Kromer, who is serving a four-game suspension for watching cable television (Bridezillas, specifically) in the film room. For the first four games, Saints kicking adviser Marcus McCovey will take over, despite his two-game suspension for rhyming Sean Payton with "Sean Satan" in a Skype call with his daughter. The first two Saints games will be coached by New Orleans citizen Ernest Lambreaux, who is serving a one-game suspension for plotting to coach without a proper coaching license. For that first game only, Russian emigre and renowned castrato animal impersonator Gustaf Karpov will head up the Saints, though he's suspended for a quarter because he won't stop calling chocolate doughnuts "meatless pirozhkis" during strategy meetings. In the first quarter of the first game, the Saints plan to just fumble the ball and run into each other until someone dies.

Did you catch this recent slice of The Onion about the overtime rule change?

I literally LedOL at this breakdown of an Indianapolis Star reporter's praise of Peyton Manning's classiness, by the Christmas Ape of kissingsuzykolber.com.

In another bit from KSK from April 5th, the Ape takes on an E:60 segment in which Vernon Davis paints a self-portrait:

But what will the result be? Would Vernon present himself crying on the sideline after catching the winning touchdown in the divisional round against the Saints? Would ESPN producers strong-arm him into showing the anguish of knowing that Gregg Williams wanted to use his disembodied head as a bedpan? Perhaps some poignant but boring stuff about his upbringing? Or would Vernon give into his base impulses and show himself battling against alien aircraft in a fighter jet with TERPZ written on the side while getting a lap dance and recording his first album.

Finally, from The Triangle (a section of Grantland.com), Chris Ryan shows us how the lingo from Jon Gruden's Quarterback Camp can be used to humorous effect in real life. Spoiler alert: there is no mention of jokers or wild cards anywhere in the article. If you have any other prime examples of this, please feel free to share them in the comment section below.

That's it for the jokes, folks. I invite you to link to or quote any funny Saints/NFL stories you came across this week, as well, to keep the laughs coming. Laughter is the best medicine, after all.