OK, friends and neighbors. You may remember my first CSC True Hollywood Story from January, in which I regaled you with the ribald tale of how my parents saw/met Joe Horn hawking his BBQ sauce at their neighborhood grocery store one Saturday in December.

Well, things just got interesting again, because this time, my star-crossed parents met the voice of the Saints and former WWL-TV sports director Jim Henderson at the Flora-Bama Lounge, Package, and Oyster Bar (unofficial motto: "Come do it with us on the line!") in Pensacola, Florida on Monday!! 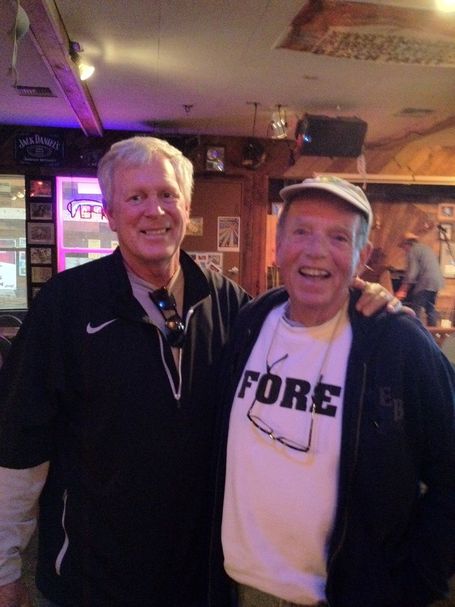 Make the jump for the full story, as only I can tell it (from a combo of emails, texts and an extensive phone interview with my parents and my Aunt Ann via speakerphone as they drove back from a New Orleans dinner with my Uncle Jimmy [my Dad's brother] and Aunt Betsy on Wednesday night).

To set the stage, it's last Monday evening (April 23) at about 6:15 or so, and as I'm walking to my car from work, I switched my phone off silent, and checked for text messages. Usually there's nothing there, but sometimes the light is flashing, and I just assumed that Mrs. Hans had sent me a text or two in response to one or two I may have sent her during my lunch break. Boy was I wrong.

My Dad's icon and cell # appear in the text window, and when I open the message, it reads:

I can almost hear him mutter, "$%&* auto-correct!!" as he sent it. So I texted back to tell him that I was just leaving work and would check it once I got home. "Hmm," I think to myself, "What is this about?"

I get home, open my inbox, and see an email from my Dad addressed to both my sister and myself with the subject line of, "Look !!!"

In the email is the above photo, with this accompanying caption:

You can meet just about anybody at the Flora Bama

Sent from my iPhone

I immediately wrote him back...

There is a God!!! Pigs have flown, hell has frozen over...Bob met Jim Henderson @ the Flora-Bama!!! Pretty cool, Dad!! Did you talk to him much, or just get the picture?

And I'd love to write about this for CSC this weekend and post the picture and story, with your permission, kind sir.

Yes, write away. Told him about your connection with CSC. He said he reads it. Jim was as cordial as u would expect.. Spent awhile speaking with he and his wife( Stump)..she said if your Mom could be called Weese then she could be Stump.
After he and his friends sat a few bar stools away, he sent me a free drink .
Call for more details before writing CSC.

So, we connect a couple of days later by phone, and I came to find out that on Monday my Mom and Dad decided to take a romantic walk up the beach from their condo to get a beer at the Flora-Bama, as it had finally moved beyond the post-Hurricane Ivan "trailers and portables" architectural style to more permanent structures. They had been wanting to check it out since they saw the GRAND OPENING signs in the midst of "Spring Break 2012!!!" fever, and now with the crowds noticeably lessened in the post-Spring Break, it was go time.

It was about 4:00 in the afternoon when they were there, bellied up to the bar, and they saw two couples enter. My Mom said, "That might be Jim Henderson, Robert." My Dad says back to her, "It IS him." And then he yells across the bar, "Hey Jim!!"

That's my Dad, on a first name basis with all the Big Shots (when I was in high school, we took a family vacation to California, and when driving through Carmel when Clint Eastwood was mayor, he rolled down the window and shouted, "Hey, Clint!!" at the top of his lungs at the pedestrians, even though Clint was nowhere in sight...).

I guess Jim is used to this, because he came down and chatted with them for a good bit of time, very pleasant, congenial and nice, just like he seemed on TV. My folks live in Covington and are recently retired, and since Jim lives in nearby Mandeville and is also recently retired, they had much to talk about.

Jim and his wife were there with some friends from New York, staying in a place on Perdido Key. Jim introduced his wife to my folks. Apparently she's on the short side and her nickname is "Stump." After hearing my Mom's name, she said, "Well, if she can be Weese, then I can be 'Stump'." Ha! How fun is that?

My Dad told him about me writing for CSC (quite possibly embellishing it just a bit to make me seem like the CEO and brainchild of it all), and Jim said that he actually reads CSC!! Ha! How fun is that?

They also talked to him about how much they liked him when he took over for Hap and did so well, and how much we, as a family, enjoyed watching him do the sports on WWL, and then listening to him call the games on the radio starting in the mid-80s, inspiring a young HansDat to consider/dream of some kind of a future in sports media (and here I am now, LIVING THE DREAM, people). Ha! How fun is that?

So they lined up and took the picture using my Dad's phone, and then went their separate ways, with Jim and crew settled in at the other end of the bar, and my Mom and Dad staying put while my Dad sent the picture out to my sister and myself, as well as his best friend from childhood, Fenner, who also has a condo on the Florida gulf shores, and who has been a Saints season ticket holder since the very beginning in 1967. Ha! How fun is that?

A few minutes later, the server comes up to my Dad and asks what he's drinking. My Dad tells her, and then asks her why. She pointed to Jim Henderson and said, "He wants to buy you a drink." So my Dad got to have just 'nother beer on Jim, gave him a big wave and a smile when it came, and Jim waved and smiled back at him. Ha! How fun is that?

And a few minutes after that, Fenner (remember him?), who had received the email on his phone, called to ask my Dad where he is. My Dad tells Fenner that they're at the Flora-Bama, and Fenner says, "I'll be there in five minutes." And sure enough, in about five minutes, in walk Fenner and his wife Nancy, who immediately approach Jim Henderson and begin chatting him up like old pals. Fenner is a super nice guy who has never met a stranger in his life. He and my Dad go really well together, and I think that may be where my "niceness" comes from, both nature- and nurture-wise.

That's it for this story, I hope you enjoyed it. Be sure to tune in next time, after my Mom and Dad run into Sean Payton at the Time Saver getting an ICEE and a Hubig's pie (really, this could really happen!!).