Breaking Down the NFL's Bountygate Evidence

Share All sharing options for: Breaking Down the NFL's Bountygate Evidence

We've all been waiting to see some of this alleged evidence the NFL claims to have against the Saints. Yesterday, we finally got that chance when the NFLPA released 16 exhibits of evidence ranging from team presentations to handwritten note transcriptions.

Some of it might be legitimate, some of it might be a bit of a stretch. Some of it is downright funny. But none of it proves that severe punishments were necessary. In fact, the only thing this evidence does prove is that the Saints really suck at creating Power Point presentations.

Make the jump for a pretty damn detailed breakdown and explanation of all the significant NFL evidence released and some of the not so significant. Hell, maybe this very post will be included in future NFL evidence packages!

Here is what most people are currently considering the damning evidence. It's a typed version of a handwritten note allegedly proving that $35,000 was put towards knocking Brett Favre out of the 2009 NFC Championship game, $5,000 of which was contributed by Joe Vitt. 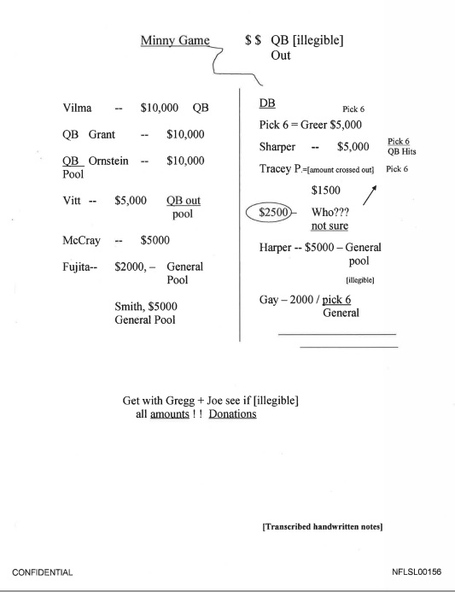 Below are a few slides taken from team presentations, that show just how much money certain defensive players owed and for what. ME's = mental errors. MOBP = missed opportunity for big play. LOAF = lack of effort. 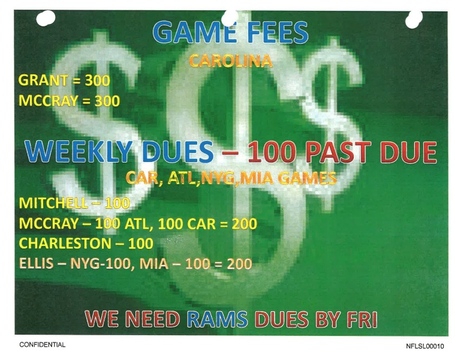 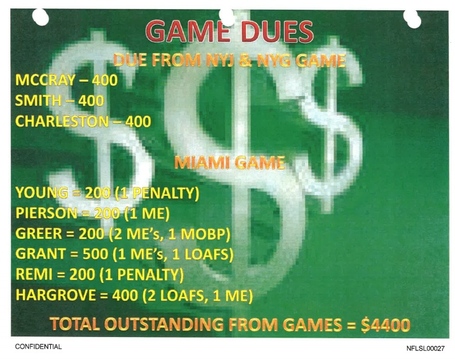 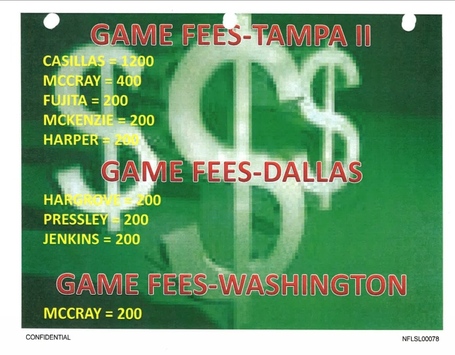 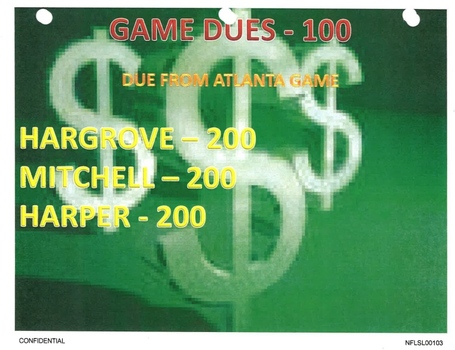 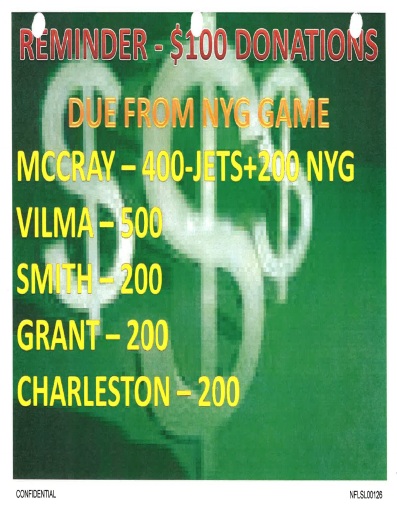 Notes from the 2009 NY Giants and Dolphins games, showing what each player owed and for what. The NFLPA claims a cart off is just a hard hit. It doesn't literally mean that a player was carted off the field. Also, a whack is another term for legal "crossbody tackle." 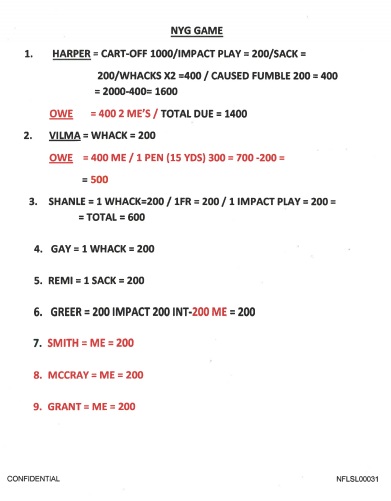 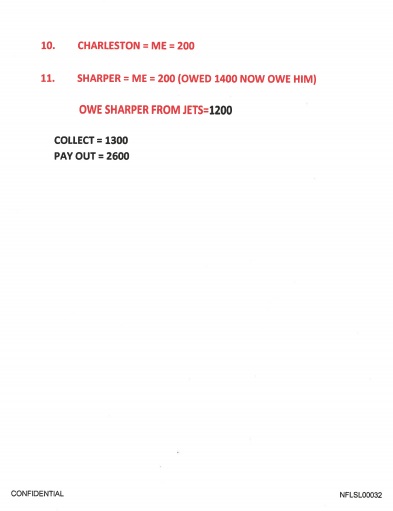 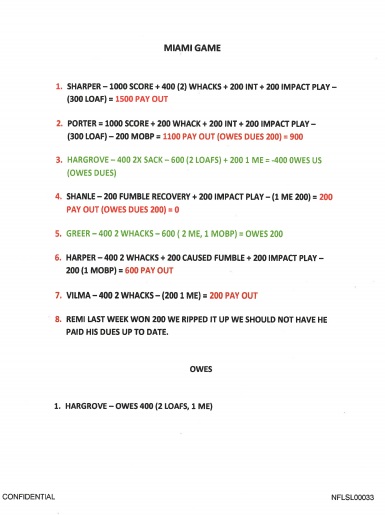 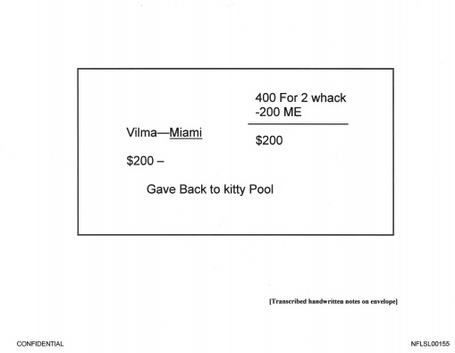 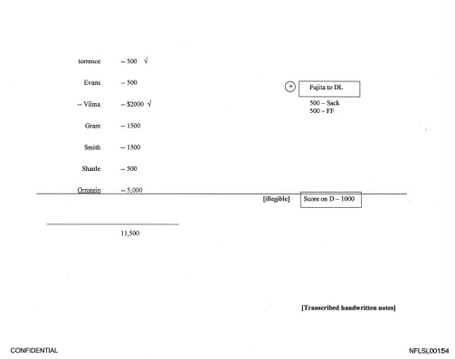 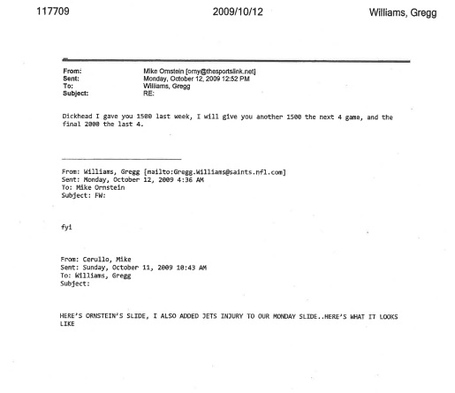 Below are two slides taken from a September 15th, 2011 defensive team presentation, showing which player has contributed money to a kitty and which one has submitted their P.O.A. (I am assuming this stands for Pledge of Allegiance) 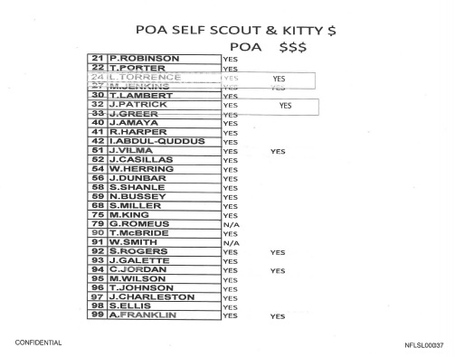 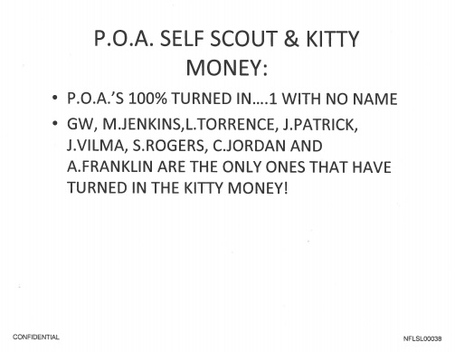 The below two slides were taken from a defensive team presentation on January 7th, 2011. Again, the NFLPA defines a whack as a legal "crossbody tackle" and this is how they explain Kill the Head:

"Kill the Head" (KH), is part of the "Defend every blade of grass" philosophy that the team played with. Its strategy was to get RB's and WR's to mentally vacate the game. The logic is that if you allowed RB's and WR's to run straight at you and successfully penetrate your defense, then you would basically validate their superiority. You would by default present a passive approach to defense. The result of this would be catastrophic to any defensive game plan.

This chart was a production tool used to encourage swarm tackling. Multiple players could get KH points if they were involved in tackles. The points were given liberally to players to encourage a tackling technique that resulted in a higher percentage of short yardage stops. The measurement for this is "YAC", Yards After Catch. The lower the YAC, the better.

This was graded using game film. Keep in mind that game film isn't the same as "television" film. When the film is reviewed it does not included the audio like you would expect from a television broadcast, so the coaches/grader can't hear the whistle to stop the play. The result is the high number of "Kill the Head" numbers. 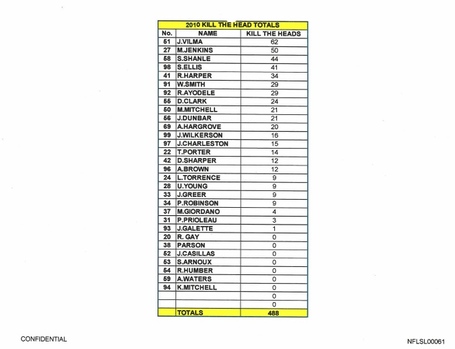 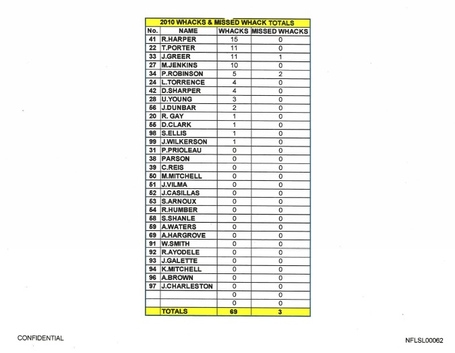 Slides from a defensive team presentation prior to the 2011 Wildcard game vs. the Seahawks. Were the players actually supposed to be able to read all this black text on top of the black background? 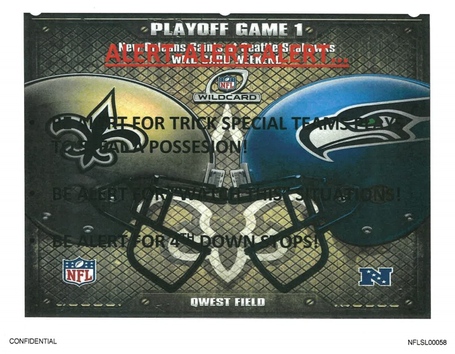 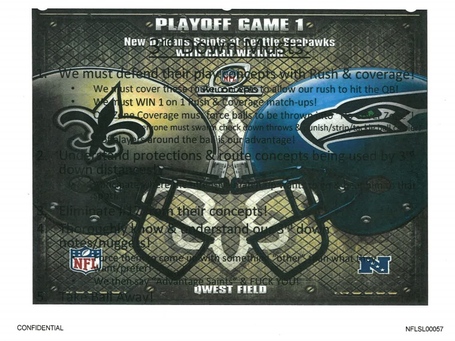 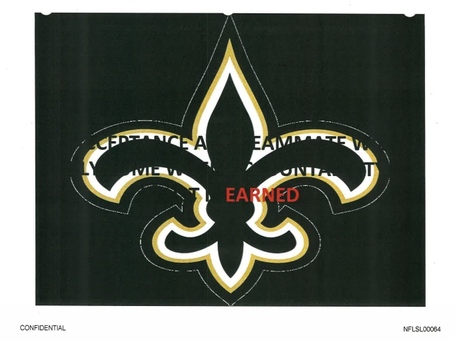 They actually used a picture of Dog the Bounty Hunter and referred directly to bounty money in a slide from a defensive team presentation. #facepalm #SMH 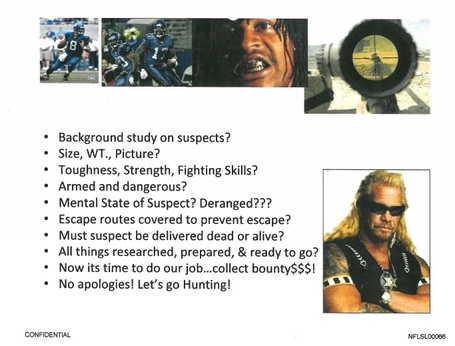 I have no idea what the hell this slide from a defensive team presentation is supposed to mean. I am assuming it's for stupid or dumb plays. 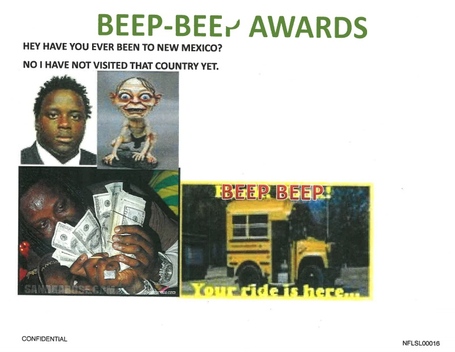 The defense eats at Impastato's so often, they can't even spell the restaurant's name right. #doublefacepalm #SMH 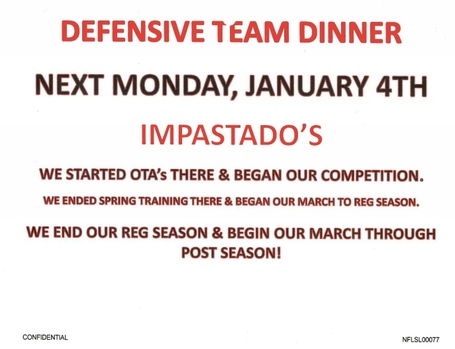 No respect for former Saints fullback Mike Karney. I never knew that was his middle name! (Note: edited by me for language) 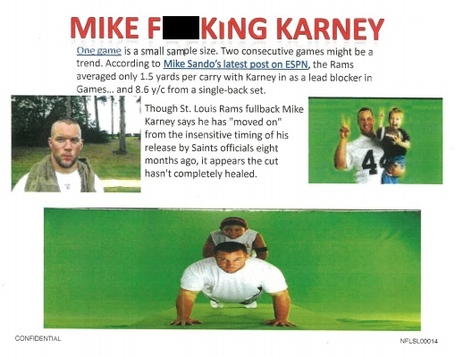 Gotta laugh at the coaches calling out Randall Gay for his piss poor tackling technique during a defensive team presentation. (Note: edited by me for language) 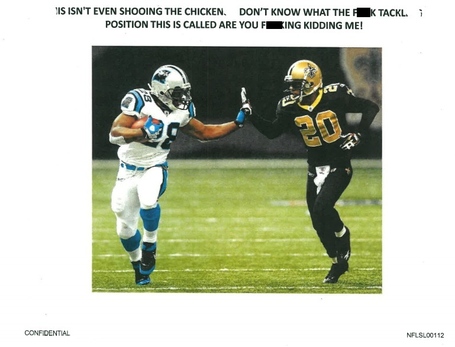 It's funny, not only because they actually included as evidence Sean Pamphilon's ridiculously long diatribe about the release of his Gregg Williams audio tape, but also because they refer to Times-Pic Saints beat writer Mike Triplett as "Matt." 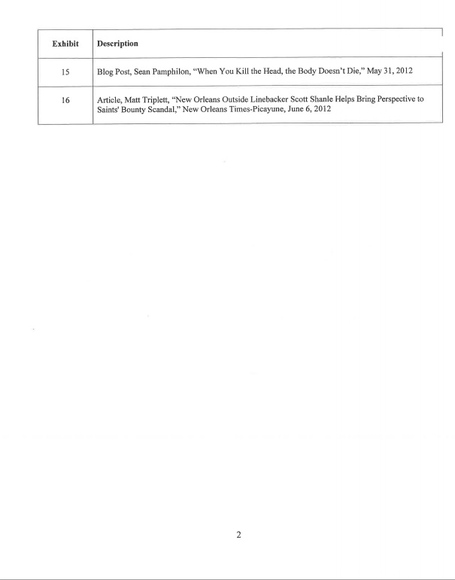