Does John Kasay Prefer to Kick with Laces In?

Share All sharing options for: Does John Kasay Prefer to Kick with Laces In?

Saints fans everywhere were surely screaming "LACES OUT!" at their television screen Thursday night when they saw John Kasay shank a potential game-winning 41-yard field goal late in the 4th quarter against the Patriots, thanks to a crappy holding job by backup quarterback Chase Daniel.

In case you missed it, here's the visual proof, moments before impact: 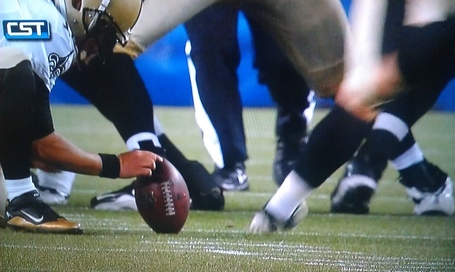 I think most of us assumed in that moment that Daniel would spin the ball after placing it down so that Kasay's foot would contact the unlaced side of the football. Instead, Chase never made an adjustment. Kinda weird.

But then I watched ESPN's "2011 Yearbook: New Orleans Saints" yesterday and noticed something interesting. They showed a slow motion replay of Kasay's game-winning overtime field goal against the Falcons last November. Check out Daniel's hold for the kick (click picture to enlarge):

He puts the ball down with the laces facing slightly toward the side. But instead of leaving it in that position or spinning the ball so the laces face out, he does the exact opposite. Daniel deliberately turns the laces toward Kasay. WTF?

Granted, these two examples make up a very small sample size so it may not be incredibly fair to make a broad assumption but I'm a blogger and that's what I do best. So if I didn't know better - and I don't - I'd have to believe that John Kasay actually prefers to kick the ball with the laces in? It's either that, or the simple fact that Chase Daniel just sucks at holding?

So which is it?