The NFL will have a pro football theme park set up for fans in the Morial Convention Center in the days leading up to Super Bowl XLVII. Below is a map and a list of attractions.

For those of you that live in the New Orleans area, the NFL Experience theme park might be something worth checking out. I'm thinking about going myself and taking pictures. Here are all the details. 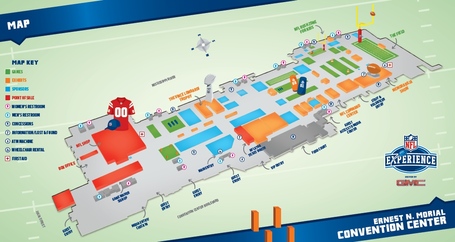 1. XBOX Kinect Return to Glory- Adults and children can experience the sensation of fielding a booming punt launched from an automated machine

4. Bridgestone's Punt, Pass, and Kick-A replica of the annual nationwide competition for youngsters consisting of one Punt, one Pass, and one Kick

5. Castrol's Speed & Mobility -Take a handoff and run through read-and-react obstacles before throwing a pass to a larger-than-life receiver

7. Breast Cancer Awareness' A Crucial Catch Game 1-Throw a touch pass with enough arc to clear the defender and enough aim to drop it into the target

8. M&M's Let It Fly-Take aim downfield, and find out how far you can throw a spiral

10. GMC's Touch Pass-Master one of the most difficult throws for an NFL Quarterback by throwing the ball on an arc over a defensive player and into a net

11. Under Armour's Run To Daylight-Race down the field against your opponents in a 40-yard test of speed

13. Under Armour's Quick Release-See how the speed of your passing release compares to some of the quickest passers in the NFL

14. Breast Cancer Awareness' A Crucial Catch Game 2-Test your receiver skills as you run a passing route and catch a pass from a jugs machine

15. Gatorade Clinic Field Fueled by Gatorade- Watch and learn from USA Football coaches and NFL Players about football from various clinics, competitions, and demonstrations. On field clinics are open to boys and girls ages 6-14 only.

1. DMI Fuel Up to PLAY 60 Zone - Eat Healthy. Get Active & Meet NFL Players. Come by and learn more about the importance of choosing good-for-you foods and staying active. Kids ages 6-12 can also participate in one of the daily youth clinics hosted by NFL players & the National Dairy Council.

2. Kinect for Xbox 360: Entertainment is more amazing with Xbox. Put your whole body in the action like never before. Don't miss out!

1. Pro Football Hall of Fame-A look into Pro football's glorious past with rare mementos on display.

3. Health and Safety - The Importance of Helmet Fit-Try on helmets and learn about the ways helmet manufacturers are working to help make sports safer through properly fitted helmets.

4. Don Shula Coach of the Year- Honoring the football coach who best exuded integrity, achievement and leadership across all levels of the game.

6. NFL Locker Room- Visit a replica NFL locker room as it appears on game day and experience the sights and sounds of the NFL behind the scenes at NFL Locker Room.

9. NFL Network Stage- The NFL Network is your official television home for Super Bowl week. Check out our live broadcasts!

10. NFL Fútbol Americano- The NFL's contributions to Hispanic players throughout the history of the League, and the NFL's passionate Hispanic fans.

13. Road to the Championship- Get the best play of highlights as the video display counts down winners of each divisional match up on the road to the Super Bowl Championship.

16. NFL Draft Set- Visit the official Draft set and take your spot behind the podium.

17. Salute to Service- An exhibit highlighting the NFL's commitment to supporting our Armed Forces.

18. NFL Kickoff - All of the exciting highlights captured from NFL Kickoff week in New York.

21. Super Bowl Rings and Footballs- See the collection of all 46 Super Bowl rings and Wilson footballs up close!

23. Chronology of Pro Football- Trace through iconic moments and developments that make the National Football League what it is today.

27. NFL Experience Autograph Stage Presented by Lenovo - Get free autographs from past and present NFL stars.

29. Look Like A Pro - Step inside a uniformed body-cast mold bearing the insignia of your favorite NFL team and have a friend snap your photo.

1. GMC Never Say Never Broadcast Booth & NFL Player Appearances- Step into the broadcast booth, get behind the desk and create your own video play-by-play of one of the three GMC Never Say Never finalist plays. Then, share your video with family and friends through your own social networks. Meet NFL Players and receive an autograph from your favorite.

2. GMC Pro Grade Catch Photo & NFL Player Appearances - Visit the GMC display to meet NFL players, receive an autograph and have the chance to win a new GMC vehicle. Fans can also take their own GMC Professional Grade Catch souvenir Super Bowl photo to share with their family and friends.

4. Pepsi & Frito Lay- Pepsi and Tostitos "kneaux how to party" and we want you to join us. We're bringing Bourbon Street to NFLX, complete with opportunities to create your own halftime show, test your football-throwing accuracy, and show off your best touchdown dance moves. So C'mon and let's party!

6. The Verizon Training Ground- Step onto the field in the Verizon NFL Training Ground and put your skills on display. Test your speed in the 40-yard dash, throw with the accuracy of Drew Brees, celebrate a touchdown like Hakeem Nicks, and show off your football knowledge with NFL Mobile as you gain points to climb to the top of the leaderboard. You won't want to miss this exclusive NFL experience brought to you by Verizon!

8. Bud Light Build-a-Bar is the hottest place to drink the coldest beer and cheer your team on to victory. Here we go!

10. Quaker's Epic NFL Adventures Course - Quaker is helping to power your play by bringing imagination to life through an oversized obstacle course that tests agility, accuracy and speed across multiple activity stations featuring larger-than-life representations of your favorite Quaker breakfasts and snacks.

12. NFL Auction - Check out the modern and vintage memorabilia at the Hunt Auction booth.

13. WWL-TV Broadcast Stage - WWL-TV, Channel 4, will broadcast daily from the NFL Experience inside the Convention Center.

The station is also airing a half-hour program each night at 6:30 p.m. "New Orleans Live" will kick off on Monday, January 28th and run through Friday, February 1st. The program showcases all of the excitement surrounding the Super Bowl, covering news, sports, and entertainment, and celebrities.

14. PCFSN Obstacle Course - The President's Council on Fitness, Sports & Nutrition and with its leader, Saints quarterback Drew Brees, challenges kids to "PLAY 60" in the President's Challenge Activity Zone. Match up against elite competition along with some surprise All-Stars and get in the zone!

1. NFL SHOP at Super Bowl Presented by Visa - Marvel at NFL licensed products from all 32 NFL teams in an eye-catching display and shop the largest collection of Super Bowl XLVII merchandise.

FedEx Shipping Center - Send home your Super Bowl souvenirs from the convenient FedEx Office Shipping Center located right outside of the NFL Shop. Plus, you can rub elbows with NFL greats throughout the week (see schedule of events for details).