An all encompassing and definitive series of posts detailing what to see, do and eat while in New Orleans for Super Bowl XLVII. This edition features everyone's favorite aspect of New Orleans life: food!

"New Orleans food is as delicious as the less criminal forms of sin." - Mark Twain

Fortunately for you, the reader, this is my area of expertise. Most Americans eat to live, but in New Orleans we live to eat. And like most New Orleanians, I've devoured my way through this town, so I'm a self-proclaimed expert.

My father always says when he visits - and I've heard this from others as well - you really can't find a bad meal in New Orleans. What my father obviously fails to realize is that his entire culinary experience has been led by me, so his impression has been positively skewed. Friends and family don't let friends and family eat at bad restaurants in New Orleans. There are just too many wonderfully unique options out there.

So please allow me to guide you.

Heroes, submarines, hoagies, grinders ... In new Orleans we call them po-boys. I won't get into the history of the sandwich but they're served on flaky french bread loaves (the best come from Leidenheimer Baking Co.) and filled with anything from fried seafood to hot sausage to french fries and "dressed" with some combination of lettuce, tomato, mayo and pickles.

Down the block from the Superdome, toward the river, is Mother's Restaurant. They're known for their Ferdi Special, a po-boy packed with baked ham, roast beef, debris (the roast beef that falls into the gravy while baking in the oven) and gravy, served dressed. But there's always a long line down the block on a regular Tuesday, so I can't imagine what it's going to be like during the Super Bowl.

That's okay, you can skip it. Instead, go to the unassuming Domilise's uptown on Annunciation St. It's absolutely nowhere near where you're most likely staying, so hop in a cab. I'd go with the half-and-half fried shrimp and fried oyster po-boy, quite possibly the best in the city. If they ask if you want it dressed, shut your mouth and nod politely. Football fans should note that Domilise's also has the distinct honor of being the Manning family's favorite place to get a po-boy, so multiple photos of Archie, Peyton and Eli adorn the walls.

Also off the beaten path but worth a trip is Parkway Bakery and Tavern on Hagan Ave. in mid-city. If it's good enough for President Obama, it's good enough for you. You could try the fried shrimp po-boy here, but my recommendation would be the super sloppy roast beef po-boy. Just roll up your sleeves and keep plenty of napkins nearby. Be sure to throw a dart at the picture of Goodell pinned on their dart board.

Best Kept Secret: Though not really a po-boy, get the Royal Feast sandwich from Verti Marte on Royal St. in the French Quarter.

Geez, I don't even know where to start. Attempting to come up with an adequate yet concise listing of restaurants to try in New Orleans seems an almost impossible task. There are so many great options. Which ones do I include, which ones do I leave out?

I've decided it's best if I try and stick with restaurants only in the downtown area since that's likely where most people will be staying and hanging out, even if it means not mentioning some of my personal favorites. I've also decided the best way to organize this is by chef, followed by a listing of a few of my all-time favorite dishes that I highly recommend you seek out and enjoy.

Of course everyone knows Emeril Lagasse. He's not originally from New Orleans but his culinary career took off here when he became executive chef at the world famous Commander's Palace. He left Commander's to start his own restaurant, Emeril's, and the rest is history. Emeril now owns two other restaurants in addition to his flagship here in the city and a bunch more as part of his worldwide empire. They are all definitely good places to enjoy a meal. NOLA, which is on St. Louis St. in the Quarter, is probably the most casual. Delmonico on St. Charles Ave. is the most formal. And the original Emeril's on Julia St. is right in between, both in physical location and atmosphere.

Immediately before Emeril took over the job, Paul Prudhomme was the executive chef at Commander's Palace. He's the guy who looks like Dom Deluise and has his own line of sauces and seasonings most likely found in your local grocery store. Prudhomme made blackened redfish a wildly popular culinary craze across the country in the 80s, so much so that the Louisiana government had to ban the commercial catching of redfish just to save the species. His restaurant on Chartres St. in the Quarter, where you can still get multiple blackened dishes, is called K-Paul's. Everything is incredibly rich and delicious.

By the way, as you could imagine, Commander's Palace is a pretty good restaurant known for cultivating culinary talent. It's located in the Garden District a little ways outside the downtown area and it's arguably the city's most famous and respected dining establishment. Commander's is owned and operated by members of the Brennan family, which is important to note because the Brennan family operates a lot of restaurants in New Orleans and chances are you will end up eating at one.

Another famous young chef - and arguably New Orleans' best right now - quickly building his own restaurant empire here is John Besh. If you ever watch Food Network, you've undoubtedly seen him on numerous shows. His flagship restaurant and still his best is Restaurant August. It's pricey and the portions are small but they are damn delectable. I always feel like I'm on Top Chef when I dine here. Besh now also owns and operates his Besh Steakhouse, a Franco-German brasserie called Luke, an Italian restaurant inside the Roosevelt hotel called Domenica, a casual 40s-themed diner located in the National WWII Museum called American Sector, and his newest Borgne, which focuses on local seafood. All are in the downtown area and easily accessible on foot. Try to go to at least one of these restaurants during your stay.

The newest top chef to make a huge splash in New Orleans is Donald Link, the genius behind one of the city's most popular and talked-about restaurants, Cochon. As the name implies, Link focuses on pork in the traditional cajun style he grew up with. At Cochon, no part of the pig goes to waste so you'll find unique menu items like pork cheeks, hogshead cheese, stuffed pig foot, fried livers, and hog jowls. If it's too crowded or you'd rather not sit down, just go to Cochon Butcher located behind the restaurant and grab a sandwich. They make a pretty mean rendition the Muffaletta. Chef Donald also owns one of my favorite restaurants and his flagship, Herbsaint, on St. Charles Ave. Everything at this French and Italian-inspired is incredible.

Below are a handful of some of the best dishes I've ever had the pleasure of tasting in New Orleans. Please do yourself a favor and try one of two of these. Trust me, you will thank me later. 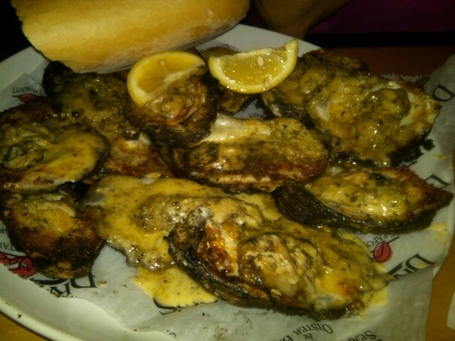 Chargrilled oysters from Drago's at the Hilton Riverside. This is Drew Brees' favorite thing to eat in New Orleans. Layered with garlic, butter and cheeses then grilled to perfection. 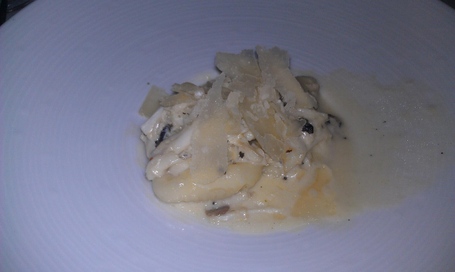 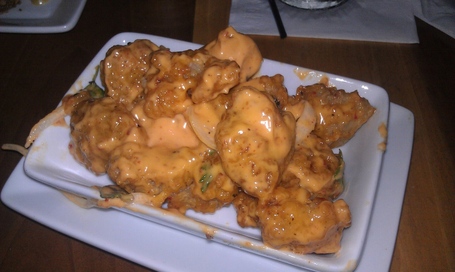 Fried alligator with chili garlic aoili from Cochon. If you only eat alligator once, this is the way to do it. 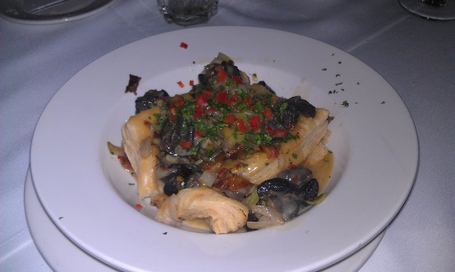 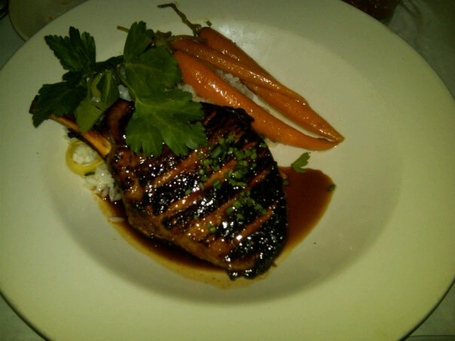 Honey ginger glazed pork chop from Mr. B's Bistro. Grilled over a wood fire and lightly smoked, this chop is just the right combination of sweet and savory. 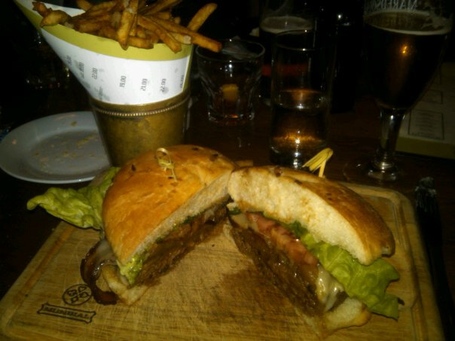