An all encompassing and definitive series of posts detailing what to see, do and eat while in New Orleans for Super Bowl XLVII. This edition details all the great things to do when the sun goes down.

"New Orleans life is such a night life. The thing that comes up very often is that our day essentially doesn't start until midnight or 2 in the morning." - Robert Asprin

I know what you're thinking: this is going to be all about Bourbon Street.

Absolutely not. Bourbon Street is a tourist trap.

I'm not saying you shouldn't go. It's a must, especially if it's your first time in New Orleans. Spend a night strolling the blocks, and pop into a few bars that catch your fancy. Catch at song at Preservation Hall, the birthplace of jazz. Definitely drink a Hurricane from Pat O'Briens and enjoy it by the flaming fountain in the courtyard. Stop in for a libation at Lafitte's Blacksmith Shop, the oldest bar in the country. Then pick up a Hand Grenade from Tropical Isle, to go, and chase it with a "Huge Ass Beer." By then you should be liquored up enough to sing a song at Cat's Meow karaoke bar.

But please don't let your entire New Orleans nightlife experience revolve around Bourbon Street. It's an all too common mistake. A huge mistake. I can't emphasize this point enough.

For a change in scenery, spend an evening just beyond the Quarter on Frenchman Street instead. It's kinda like a smaller, more hipster version of Bourbon. You'll find a much more local crowd here and lots of cool, laid back music clubs. The Spotted Cat and Snug Harbor host lots of great live jazz. The Apple Barrel is a small joint usually with a blues musician playing. But I would highly recommend going to see New Orleans Bingo Show! at d.b.a. on Thursday night (Jan. 31st). They're an interactive theatrical cabaret and rock band. There's not other way to describe it.

My favorite musical venue in the city, and probably the most famous, is Tipitina's. Named after a Professor Longhair song, Tips is located uptown on the corner of Napoleon Ave. and Tchoupitoulas St. Grab a cab to get there. What's great about Tipitina's is that they offer such a wide variety of music, from the best local musicians to national touring acts, all in a relatively intimate venue. On Friday night (Feb. 1st) you can catch hip-hop sensation Ludacris.

Show Alert: House of Blues will have a Hurricane Sandy relief concert hosted by Drew Brees, featuring Nelly and Swizz Beats on Friday (Feb. 1st) for a $1,000 per ticket. They will also have Snoop Dogg performing late night on Saturday night (Feb. 2nd) at a much more reasonable price.

There are so many unique watering holes in each of New Orleans' neighborhoods that I wouldn't even know where to begin. One thing is for sure, whatever you're looking for New Orleans is sure to have it. But if you're downtown and you're looking for the perfect cocktail concoction by a professional mixologist, I recommend the following places:

Arnauds French 75: Chris Hannah perfects the classics and invents some new ones.

Carousel Bar: The Hotel Monteleone Bar is unique for it's slowly revolving bar.

And if you love to gamble, Harrah's New Orleans is just down the street from the Superdome and will make you feel like you're in Vegas with over 2,000 slots, tons of table games and a full service poker room.

What's great is that Super Bowl XLVII happens to be right smack in the middle of Mardi Gras. Two worlds are colliding! Unfortunately, because having parades and the Super Bowl going on at the same time in downtown New Orleans would have been complete chaos and too much to handle, the city has moved up the parades to the weekend prior. Which means visitors for the big game won't get to see any authentic Mardi Gras action.

Unless, that is, you make the short trip to Metairie on Saturday night and take advantage of the unique opportunity to see the Krewe of Caesar rolling on it's traditional Metaire route. The theme of this year's parade is "Caesar's Walk in the Park" and will feature elaborate costumes, extravagant floats, and unique throws all with theme park motif.

For Mardi Gras rookies, this will be your one and only chance to get a taste of genuine Mardi Gras action. The Hilton and Harrah's hotels will be busing guests out to the parade route. If you're not staying in one of those hotels, be sure to ask your concierge how you can check it out. It's a family-oriented parade so bring the whole gang! And when you go, be sure to look for me and my family on the Harry Potter-themed float #22. 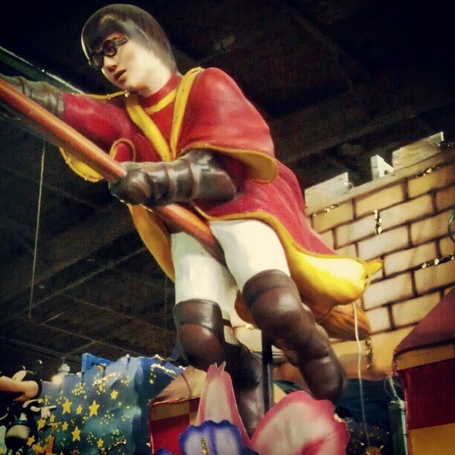