Atlanta Falcons: The Stepping Stone to the NFC Championship

In the Mike Smith-Matt Ryan era, the Atlanta Falcons have been complete playoff busts and just a short pit stop on the way to the NFC Championship.

Share All sharing options for: Atlanta Falcons: The Stepping Stone to the NFC Championship

The fans inside the Georgia Dome will stand united. United in a feeling all Atlanta Falcons fans will share in the anxious moments before kickoff.

Those are the feelings of playoffs past for the Smith/Ryan Falcons. Other emotions just as strong will be on display as the Falcons take the field against the Seattle Seahawks.

Tension - too thick to even cut with a knife.

Impatience - waiting for the other shoe to drop.

Fear - of another dreaded playoff collapse.

Yes I know, this is coming from a New Orleans Saints fan. Jealousy, fear, homerisim, so on and so forth some might say. But here I present to you facts, irrefutable facts, and trends dating back to the beginning of the Smith/Ryan partnership.

Many Saints fans, myself included, understand the tension, impatience, and fear that will engulf the Falcons fanbase this Sunday. The Saints have their own playoff burden to carry, winless on the "road" in the playoffs. The Saints have seen ultimate success at home and on neutral sites, but are 0-5 all-time on the road in the playoffs. We get it; we know that feeling when the Saints head out on the road come playoff time.

It would be unreasonable to believe that these feelings aren't shared by the Falcon players and coaches who have been through these losses as well. This Falcon team is a direct reflection of its leadership and the pressure starts from the top. Owner Arthur Blank regularly does his best Jerry Jones impersonation by stalking the sidelines with that distant glare. Matt Ryan, the F-Bomb dropping, red-faced quarterback extraordinaire has shown a penchant for vehemently displaying his frustration on the field. And lastly Mike Smith, oh, Mike Smith. Where to start? This headset destroying, vocal chord shredding, rage inducing head coach may very well go full-on "Scanners" on the sideline this Sunday. For the sake of humanity, keep this guy as far away from gamma radiation as possible.

All of these antics and behaviors add to the most prevalent feeling that all Falcons fans, players, and coaches will share this weekend:

And pressure is what the Seattle Seahawks will bring to Atlanta this Sunday. Seattle, who has allowed the fewest points per game in the NFL (15.3) and 4th fewest yards in the NFL (306.2) all while boasting the NFL's 3rd best rushing attack at 161.2 yards per game behind 1,500 yard rusher Marshawn Lynch. On the flip side, Atlanta is 9th in scoring (25.8 ppg) and 8th in yards (369.1 per game), featuring the NFL's 4th lowest rated rushing attack (87.3 ypg) and 21st ranked rushing defense at 123.2 yards allowed per game. Advantage Seattle.

Besides the disadvantages Atlanta faces on the field there are also various trends that have arisen in recent years that do not bode well for the Falcons.

Since the 2008 playoffs only one NFC first overall seed has won the NFC Championship, much less a single playoff game, that team was the 2009 New Orleans Saints. All others have failed spectacularly at home.

(Listed by season, not calendar year)

It has recently been a problem being the top dog in the NFC.

This one is Atlanta specific. We all know Atlanta is 0-3 in the playoffs under Smith/Ryan, but do you remember what all three of their opponents have in common?

That's right, under Smith/Ryan, Atlanta's opponents have used the Falcons as a stepping stone to an NFC title. This bodes well for the Seattle Seahawks and their fans, very well indeed.

Seattle wont be intimidated by a top seed, especially this top seed in this building. They've already proven they can fight back from an early deficit on the road without flinching. They won't be intimidated by this crowd, after dealing with a ravenous D.C. crowd that hadn't hosted a playoff game in 14 years. Seattle will be ready for Atlanta come Sunday, we will see if Atlanta will be ready for the pressure.

Atlanta fans have been through a lot over the years but the worst thing the Falcons have done to their fans under this regime is that they have repeatedly given them hope. Hope has poisoned their fanbase. It makes the playoff failures increasingly more intolerable. With each playoff failure the attitude has gotten worse as the expectations have changed.

In 2008 the feelings were optimism and promise.

In 2010 they were excitement and confidence.

In 2011 they became redemption and vindication.

Now in the 2012 season they've become tension and fear, and looking at the stats and trends there's a lot to be nervous and tense about. To be honest I look forward to the next installment of my favorite video of 2012. Rather than taking a step to the NFC title, Atlanta has become the step to an NFC title.

Biases may cloud judgement but stats and trends don't lie, and these all tell me that the Seattle Seahawks will win the NFC Championship, which is just fine by me. Maybe we'll all be lucky enough to see Mike Smith continue his playoff tradition: 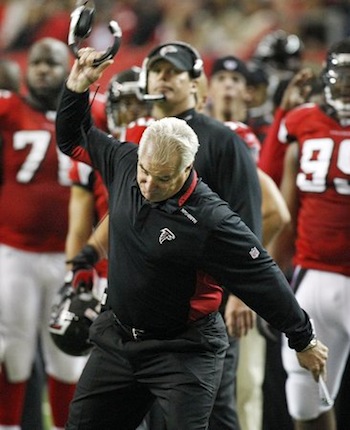