Questionable calls in favor of the Patriots were abundant in their 30-27 win over the Saints on Sunday, including a crucial missed call on the final play of the game.

There were a lot of questionable calls made by the referees during the Saints' 30-27 loss to the New England Patriots Sunday evening.

The incorrectly called false start on 4th down that should have been called offsides and given the Saints a fresh set of downs.

Missing Drew Brees' timeout call as the play clock expired, leading to an interception in their own territory.

Ruling a Brady pass to tight end Michael Hoomanawanui complete for four yards when the ball clearly bounced off the turf.

But the one that may hurt the most was on the final play of the game, when Tom Brady threw his game-winning touchdown pass to Kenbrell Thompkins. A review of the play shows Junior Galette just steps away from Brady, closing in on the sack but with an arm wrapped clearly around his neck.

That looks like a definite holding from where I sit. What do you think? 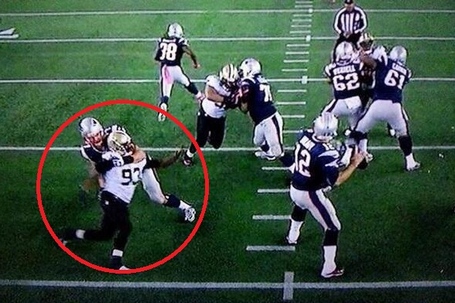 Next Up In NFL