Saints vs Patriots 2013: Patriots May Have Beaten Saints in the Third Quarter

Tom Brady threw a perfect touchdown pass to Kenbrell Thompkins with five seconds left to defeat the New Orleans Saints on Sunday. Interestingly, what the film shows is that he may have had the perfect practice throw in a similar play late in the third quarter of the game.

Share All sharing options for: Saints vs Patriots 2013: Patriots May Have Beaten Saints in the Third Quarter

Despite the easy narrative, the Patriots may not have actually won the game against the Saints on Sunday with five seconds left. In fact, what if I told you that they really won the game in the third quarter?

Let me explain: the quality of a great quarterback is to adjust to what the defense he's facing is doing and exploit even the smallest of exposed weaknesses.

With 3.07 left in the third quarter and the game tied at 17, the Patriots ran exactly the same play that would eventually result in their winning touchdown. The sequence involved the same trio: Patriots quarterback Tom Brady, Patriots receiver Kenbrell Thompkins and Saints cornerback Jabari Greer.

Although the first instance resulted in an incomplete pass, when presented with a similar situation with 10 seconds left in the game, Brady adjusted to Greer's tendencies and made the Saints cornerback pay.

Let's take a look at the tape.

First and 10 and the Saints 32-yard line (Incomplete pass to Thompkins).

The matchup of interest in this play is wide receiver Kenbrell Thompkins (#85, red arrow) who runs a deep corner route into the endzone. He is covered on the play by Saints cornerback Jabari Greer (yellow arrow). Wary of Thompkins' speed, Greer gives him a hefty seven yard cushion. 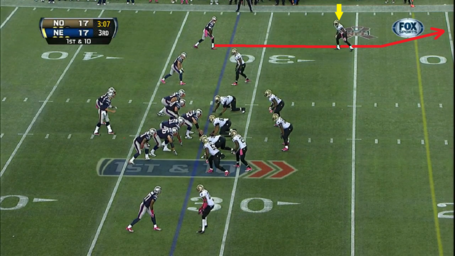 Cornerbacks are taught to look at the receiver they're covering and never let them out of their sight. In case they get beaten on a route, they are supposed to keep their eyes on the receiver until he turns his head. Only at that point are they supposed to turn as well and locate the ball.

Veteran corners however, often cheat these basic rules. A savvy cornerback like Greer knows that sometimes peeking in the backfield can result in a big play: for instance, jumping a route and intercepting the ball.

This is illustrated perfectly in this frame. As Thompkins starts his route, Greer has his eyes firmly on the quarterback as he backpedals. 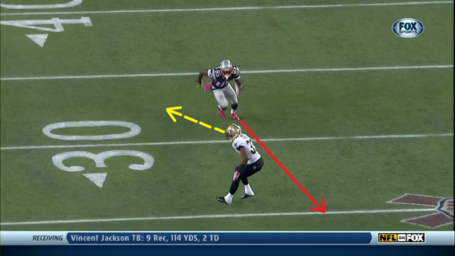 Even as the Patriots receiver breaks towards the corner of the field, the Saints cornerback is still looking in the backfield, while trusting his instincts to allow him to feel where the receiver is going. 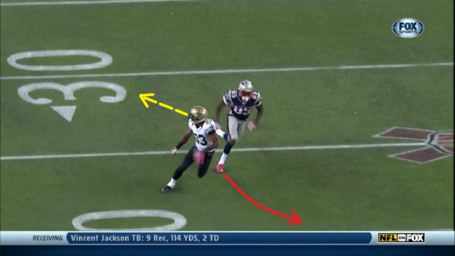 By peeking in the backfield for too long however, Greer has allowed Thompkins to get behind him. He is now in full recovery mode and has no idea where the ball is. A quick and accurate throw by Brady would likely result in a touchdown. 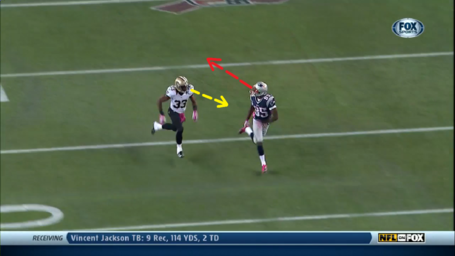 Unfortunately for New England at that point, Brady holds on to the ball a little longer than he should have and underthrows his receiver. As Thompkins puts his hands up to catch the ball, Greer, without turning around, plays the receiver's hands. 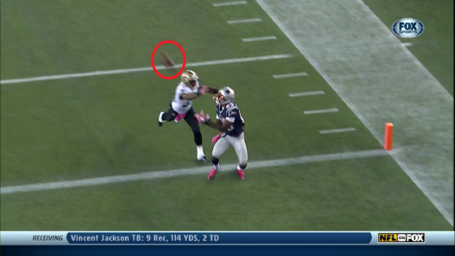 The ball hits Greer's forearm and falls incomplete. The Saints cornerback is lucky not to have been called for pass interference on that play. 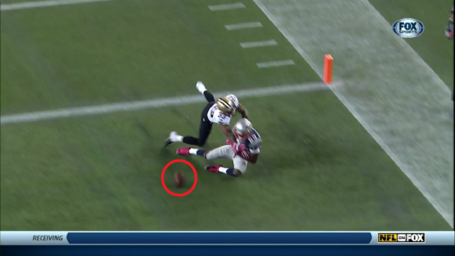 Second and 10 at the Saints 17-yard line (Touchdown pass to Thompkins).

Finding themselves in a similar position with Thompkins (red arrow) being guarded by Jabari Greer (yellow arrow), the Patriots call the same corner route for their rookie wide receiver. Having observed the way Greer played his receiver earlier, Brady must have liked the matchup he had on the outside. He never hesitated. 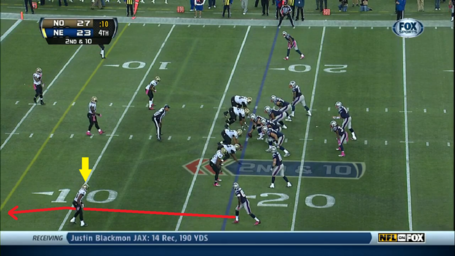 As the ball is snapped, Greer takes the same approach and looks in the backfield as Thompkins starts running his route. 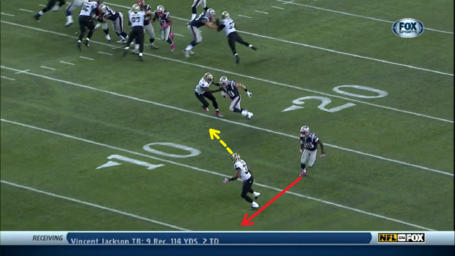 Once again, as he is looking at the quarterback, he allows the Patriots wide receiver to get behind him, even as Thompkins himself starts turning to look for the ball. 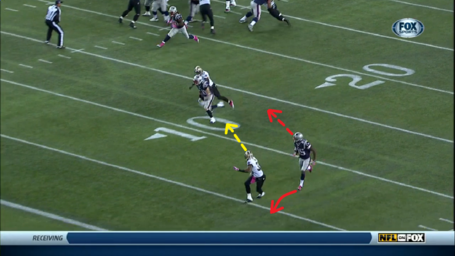 Had Greer re-directed Thompkins inside where he had safety help in Rafael Bush (blue arrow), Brady might have had to either throw the ball away or dump it off to his running back (pink arrow), hoping he could make the Saints safety miss and try to get into the endzone. 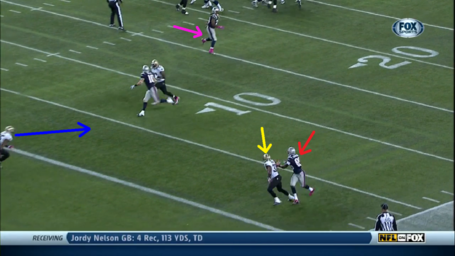 Unfortunately for the Saints, Greer is now in a disadvantageous position, in front of the taller Thompkins. With safety Rafael Bush now too late to help, Brady lofts a perfect throw towards the corner of the endzone. 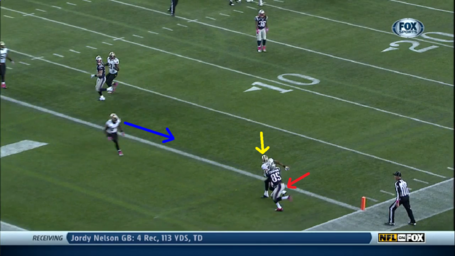 And the rest is now history. 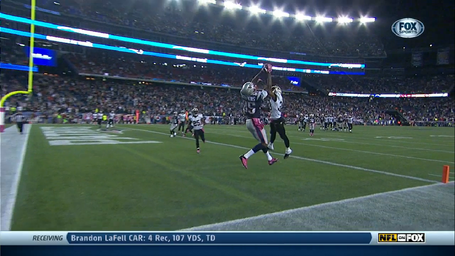 As gut-wrenching a loss as this one was for the New Orleans Saints, it could also have been a blessing in disguise. During the excellent tenure of Sean Payton as head coach in New Orleans, the Saints have had the strange habit of losing games in head-scratching fashion to heavy underdogs. At 6-0 and after having enjoyed a bye week in which everyone would have tabbed them as maybe the best team in the National Football League, it isn't too far-fetched to imagine that the saints could have laid a giant pelican egg against the overmatched Buffalo Bills two weeks from now.

With this loss behind them, you can rest assured that Payton and his players will be focused and ready to atone for the mistakes that cost them the game in New England. I wouldn't want to be newly-signed Bills quarterback Matt Flynn (or whoever will play quarterback for them) two weeks from now in the Mercedes Benz Superdome.