The 15-yard penalty called on the Patriots yesterday that cost them the game against the Jets should have also been called against them last weekend when they narrowly beat the Saints... but wasn't.

Share All sharing options for: Saints vs. Patriots 2013: Referees Missed Another Crucial Penalty in Saints' Week 6 Loss to Patriots

Have you finally gotten over the Saints' Week 6 loss to the Patriots last weekend and the terrible officiating that cost New Orleans the game?

Relive all the terrible calls and non-calls from the Saints 30-27 loss to the Patriots.

Well bend over a little further, break out the lube, and prepare to take it a little deeper, because apparently the officiating crew during that game missed yet another penalty that could have dramatically changed the outcome of the game and kept the Saints undefeated.

The Patriots had used the same play -- with the same two players (Jones looping behind Will Svitek) -- on the New Orleans Saints' 39-yard field goal on Oct. 13 with 2:24 remaining in the game. No penalty was called then.

The Saints made their attempt to make the score 27-23. But if the officials had called a penalty, the Saints could have extended the drive and possibly run out the clock so the Patriots wouldn't have had a chance to win the game late, which they did when Tom Brady connected with Kenbrell Thompkins on a 17-yard touchdown strike, giving New England a 30-27 victory.

Yep, that's right. The referees failed to call a penalty on the Patriots in the final minutes of their win over the Saints. And that missed call might have allowed the Saints to win. Hard to believe, right?

As it turns out, the missed call during the Saints' loss helped the Jets make sure it didn't get missed yesterday during their game.

Here are two still images from the play: 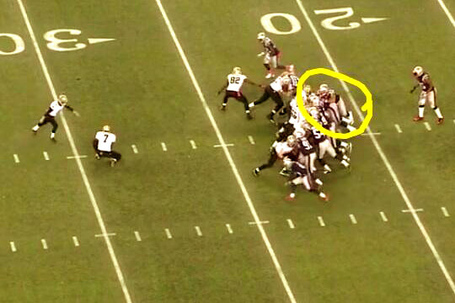 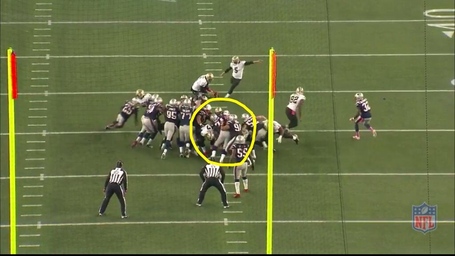 They say that time heals all wounds. But in this case, it's only made it worse. Enjoy the rest of your friggin' Monday.