Jimmy Graham is clearly the Saints' best receiving threat on offense. But is he prohibiting Drew Brees from throwing to other players?

Share All sharing options for: Saints' Drew Brees Too Dependent on Jimmy Graham?

If Who Dat Nation knows anything about the Saints' offense (other than how good Drew Brees is), it's that Jimmy Graham is by far the team's top target. In fact, he has been targeted 60 times, the next closest being Darren Sproles with 43. While he is a freak of nature and is arguably the second best athlete in the NFL next to Patrick Peterson of the Cardinals, he is human, and he showed that versus the Patriots with six targets and zero catches.

More on The Grahambler: Jimmy Graham Getting MRI on Foot Saints Optimistic Graham Will Be Ready After Bye

A troubling statistic that unfortunately makes sense, is that out of the Saints' top five receiving threats in the following order -- Graham, Darren Sproles, Marques Colston, Kenny Stills, and Pierre Thomas -- Jimmy has the second lowest catch percentage of 61.67%. That number tops only Stills' 52.6 percent, while the others are all above 70 percent. This comes as no surprise as Graham led the league in drops last year with 16. While Jimmy can be at fault for much of his drops, the man throwing him the ball can take some blame as well.

Too many times do I see Brees throwing Graham the ball when he is double, even triple covered when there is clearly a better option available. Mathematically the only setup where a defense can double cover every single receiver in any given play is when there is only one pass rusher, and of course that is the most extreme dramatization that I can give.

Yes, I understand how large of a frame Graham has and how large his area of reach is, but when someone is covered by only one man, most of the time that is going to be the best option unless the receiver is being ridden like Seattle Slew. There are, of course, the occasional exceptions, but you get the point. If someone could find a stat that broke down Drew's interceptions by the player he was targeting, I can almost guarantee that Graham would be light years ahead of every other receiver.

The Saints Should Trade Jimmy Graham After This Season 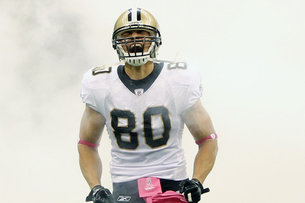 The Saints don't need Graham to have a topflight offense, but they could use him to build a topflight defense.

If I could ask Drew Brees one question, it would be why he decides to throw Jimmy the ball regardless of the amount of guys that are covering him. To tell you the truth, I think he is getting too comfortable and dependent on throwing the ball his way. Brees, even more so than us, knows what Jimmy is capable of and knows that he can bail him out like no other player on this team when he needs to make a throw. Hurling the ball at him is a great option to have, but when you go to him every other play, it is extremely recognizable and forces Drew to throw a near perfect pass because he gets multiple defenders on him. The Saints have a plethora of capable receiving options and they are not used nearly enough.

Our friend J.R. ponders the topic of trading away Jimmy after this season. Honestly, it doesn't seem too far fetched of a theory given all of the circumstances. The Saints are already in a huge cap bind due to Brees' then-record breaking contract, and teams are always willing to give up significant compensation for a dynamic offensive weapon.

So have at it, Saints fans. Is Drew becoming too dependent on Jimmy Graham?