Heading into a crucial NFC matchup with the Chicago Bears, the New Orleans Saints unusually bring more than their high-flying offense to Soldier Field. They have the 6th ranked defense and are looking to continue a trend Saints fans are still adjusting to: bringing consistent pressure in their opponents' backfield. Already with 12 sacks on the season, here's how the Saints front four is getting to the quarterback.

After a quarter of the NFL season, the revamped New Orleans Saints defense is turning heads. Coming into this 2013 campaign, the Saints offense was expected to be where it sits after four games: New Orleans is the 4th ranked offense in the league with 419.5 yards per game.

What is really shocking to everyone is the ongoing turnaround being orchestrated by new defensive coordinator Rob Ryan. The Saints are currently ranked 6th on defense, allowing 304.5 yards per game. Even more importantly, New Orleans is 5th in the NFL in points allowed, giving up only 13.8 points per game.

A big part of the defensive revival in the Big Easy has been the Saints very effective pass rush. Departing from the "live by the blitz, die by the blitz" mentality of former defensive coordinator Gregg Williams and just as far from the "sit in a zone defense and pray" approach of his predecessor Steve Spagnuolo, Rob Ryan has brought a defensive style to New Orleans that relies on disguising coverage and oscillating between a 3-4 and a 4-3 front; all while blitzing sparsely.

The Saints now have 12 sacks so far this year, on pace for an outstanding total of 48 sacks this season. As a comparison, the 2012 team had a grand total of 26 sacks.

Just how are the Saints rushers getting to the quarterback? Let's look at the tape and examine three of their four sacks against the Dolphins.

Third and 9 at the Dolphins 21-yard line (Tannehill sacked by Junior Galette).

Before the snap, the Dolphins line up with two receivers on the right, one receiver on the left and two players in the backfield besides quarterback Ryan Tannehill. The Saints show a four-man front, with linebacker Curtis Lofton and cornerback Chris Carr (red arrows) showing a blitz. 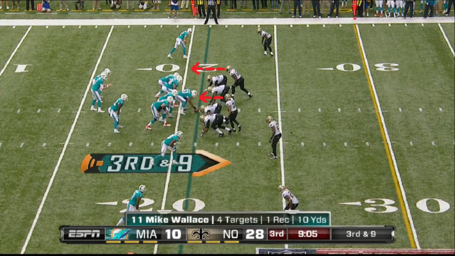 From the coaches' film view, Tannehill has tight end Charles Clay (#42, yellow arrow) to his right and he'll be in charge of blocking Saints cornerback Chris Carr (#31, red arrow) if he blitzes, then release in the seam for a potential pass reception. On Tannehill's left, running back Daniel Thomas (#33, yellow arrow) is going to run a flat route. If Saints linebacker Curtis Lofton (#50, red arrow) blitzes, Thomas should be open and that's where Tannehill intends to go first. 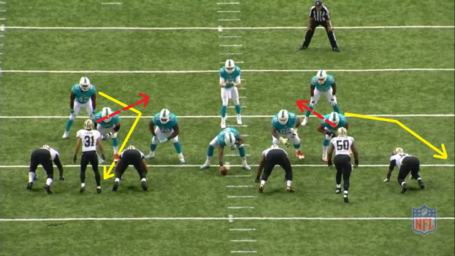 At the snap, both Carr and Lofton drop in coverage, and the Saints rush only four, forcing Tannehill off the seam and flat routes. Meanwhile, Saints right defensive end Junior Galette now has a one on one matchup with Dolphins left tackle Jonathan Martin (red circle). 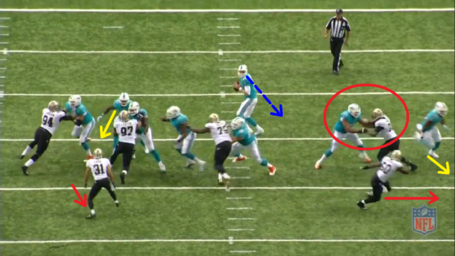 Galette speed rushes past Martin (red circle), while Tannehill (blue arrow) is now going to his third option. Saints defensive end Glenn foster (red arrow) denies the middle of the pocket to the Dolphins quarterback who has the ability to run. 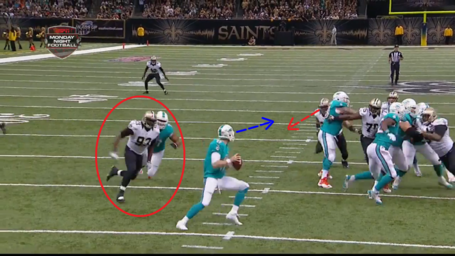 Foster's pressure up the middle forces Tannehill to try to escape laterally. It's a speed race the young quarterback isn't going to win against Junior Galette. 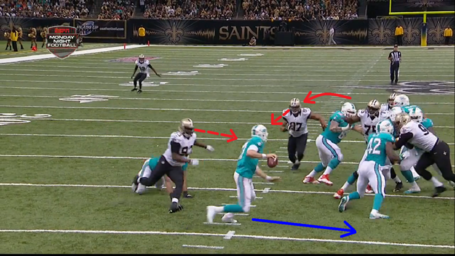 Galette sacks Tannehill for a loss of 12 yards. 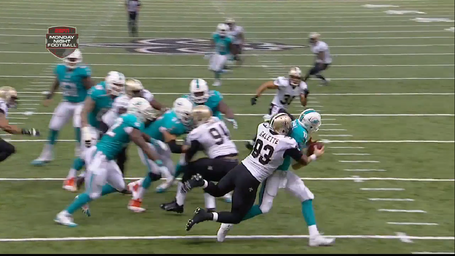 First and 10 at the Dolphins 20-yard line (Tannehill sacked by Martez Wilson).

Before the snap, Tannehill's primary and secondary options are tight end Charles Clay (#42, yellow arrow) and wide receiver Mike Wallace (#11, yellow arrow) who run a shallow corner pattern and a deep corner pattern respectively at the bottom of the screen. Besides Tannehill, running back Lamar Miller (#26, yellow arrow) runs a quick out, which will leave the quarterback alone in the backfield. 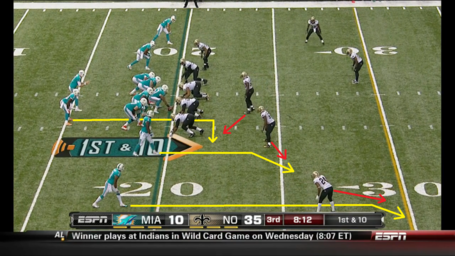 Tannehill (yellow circle) winds up his throw, however all his receivers are blanketed by Saints defenders. Meanwhile, from his blindside, Saints outside linebacker Martez Wilson is engaged with left tackle Jonathan Martin who again, has no help (red circle). 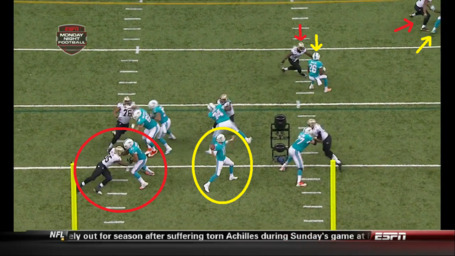 With no one open, Tannehill holds on to the ball and feeling the pressure from his blindside, tries to escape the pocket laterally. Wilson has beaten Martin and is bearing down on the Dolphins quarterback. 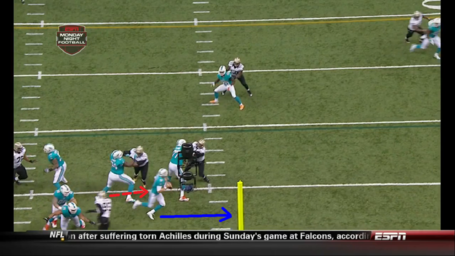 With Wilson's speed, Tannehill once again has no chance. He is sacked for a loss of eight yards. 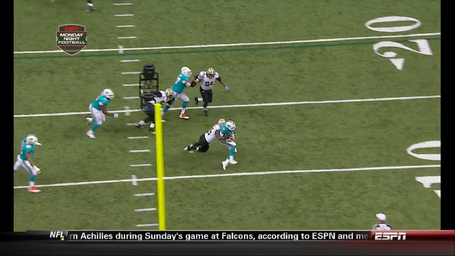 First and 10 at the Dolphins 32-yard line (Tannehill sacked by Cameron Jordan).

In this play, the Dolphins go with a 5-route design. Once again, the running back runs a quick out from the backfield. The Saints show a four-man front, with two linebackers to cover the tight end out of the slot and the running back. 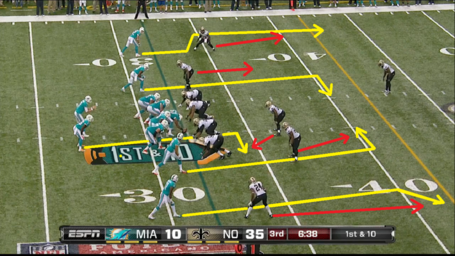 From the coaches' film view, the running back vacating the backfield (yellow arrow) leaves Saints left defensive end Cameron Jordan (red arrow) who is lined up at the "five-technique" (outside shoulder of the offensive tackle), in a one on one matchup with former Atlanta Falcon right tackle Tyson Clabo. 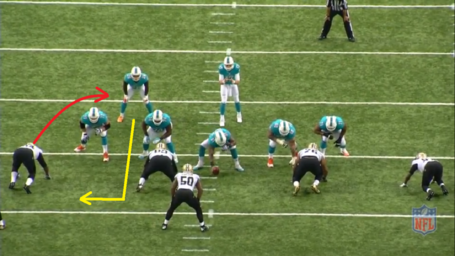 As Miller runs downfield (yellow arrow), Jordan uses a combination of strength and quickness to slap Clabo's arm away from his body (red circle) while running past him. The Dolphins right tackle is caught flat-footed. 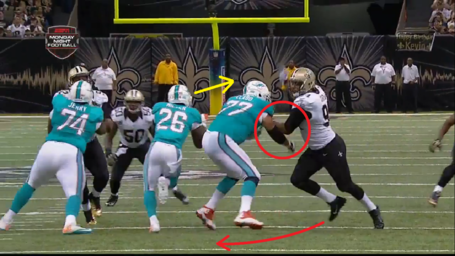 As Clabo tries to recover, Tannehill isn't yet aware of the fact that Jordan is upon him. 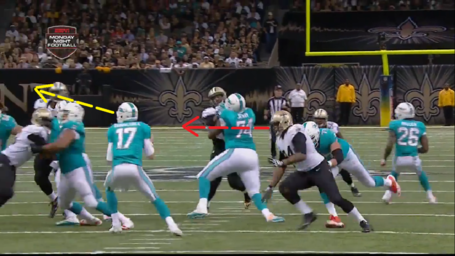 When the Dolphins quarterback realizes what i happening, it's too late. He is sacked for a loss of nine yards. 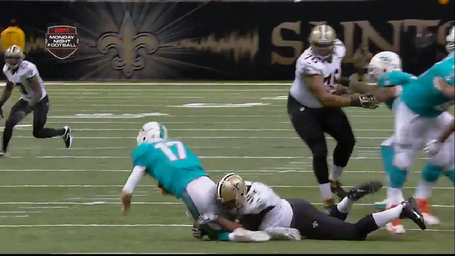 The Saints would go on to sack Tannehill one more time, by defensive end Tyrunn Walker. What the film shows is a Saints defense that is currently firing on all cylinders. The secondary and the front seven are working with a striking synergy that allows them to put pressure on opposing quarterbacks with only four rushers, thus making it difficult to find passing lanes.

Should this trend persist, New Orleans will continue to win games, not only because of their high flying offense, but also on account of a defense far stingier than any could have imagined before the beginning of the season. The Chicago Bears are on notice.