With most of the Saints veteran receiving targets ailing or recovering from injuries, rookie wide receiver Kenny Stills is carving himself a nice little niche in the Saints complex passing attack. Stills has three touchdowns in the past two games and is quickly becoming a viable deep threat in the Saints multiple offense.

The New Orleans Saints receiving corps has been hit hard by the injury bug in 2013. It started with veteran wideout Marques Colston, who suffered a foot injury during the offseason and whose production has considerably slowed down compared to his usual standards. After seven games in 2012, Colston had 40 receptions for 520 yards. At the same junction this year, he has only 27 receptions for 342 yards.

Another playmaker that has been missing in Brees' receiving arsenal is Lance Moore. The Saints best route-runner finally returned to the lineup after missing the last three games with a hand injury. Moore has a meager 7 receptions for 78 yards on the season.

Despite the attrition, New Orleans ranks third in the NFL in total passing yards (2,290), behind only the Denver Broncos and Detroit Lions. The Saints are also second in the league in touchdown receptions (19).

While tight end Jimmy Graham has been Brees' main receiving target so far this season (40 receptions for 630 yards), the Saints passing offense has been buoyed by the steady emergence of rookie wide receiver Kenny Stills.

Stills has been targeted 23 times this season and has 13 receptions (57%) for 327 yards, a 25.2 yards per catch average and three touchdowns. Interestingly, the three scores have come in the past two games, two of them on critical third downs. This is a great sign, as it would indicate that the young wide receiver is gaining trust from both Brees and the Saints coaching staff.

Let's take a detailed look at Stills' abilities as they were on display against the Buffalo Bills this past Sunday, in a game the Saints won 35-17.

The Saints start this play in the I-formation, one single receiver to the left (#88 Nick Toon) and wide receiver Kenny Stills (#84, red arrow) in motion. Stills is going to be matched up with bigger and slower Bills linebacker Jerry Hughes (#55, yellow arrow). Needless to say that play-caller Sean Payton must have liked that matchup. 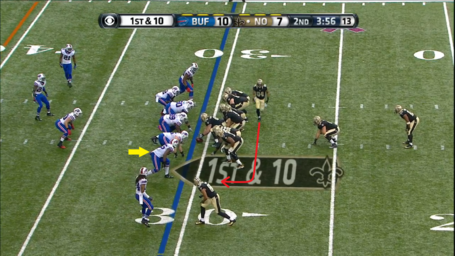 Because the Saints had shown a willingness to rush the ball (26 attempts) in this game, the Bills had to somewhat respect the run. As Brees (pink arrow) fakes the handoff to running back Pierre Thomas in the backfield, Hughes is caught peeking in the backfield (dashed yellow arrow) as Stills (red arrow) and Toon (blue arrow) explode in their routes. 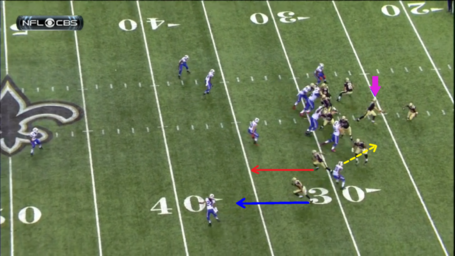 By the time he realizes that the Saints were running a play-action fake, Hughes (yellow arrow) is behind the eight-ball. Toon runs a deep dig route (blue arrow), while Stills runs an out-and-go route (red arrow). 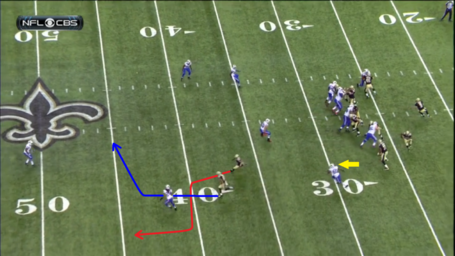 The Bills single deep safety (green arrow) is now in a quandary: should he go with Toon (blue arrow) in the seam, or cover Stills (red arrow) on the outside? Brees holds the ball a second longer and will decide in a heartbeat whether to throw to Stills or Toon, depending on where the safety will lean. Meanwhile, Bills cornerback Stephon Gilmore (#24) who was matched with Toon from the get-go follows the Saints receiver on the inside. 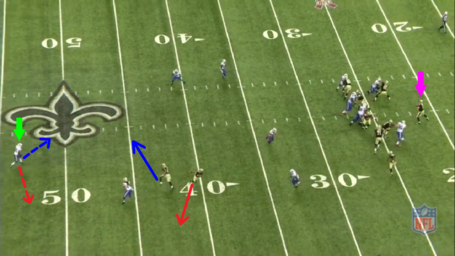 The deep safety (green arrow), influenced by Brees eyeing the middle of the field (pink arrow), opts to cover the dig route. That leaves Stills wide open has he curls down the field into his go route. Brees immediately winds up to throw to the outside. 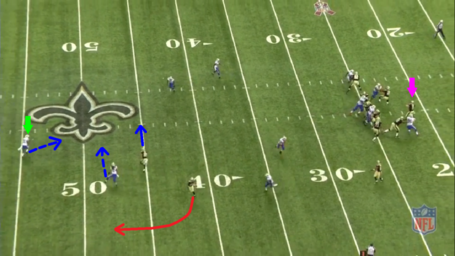 This is where trust and timing between quarterback and receiver come into play. Brees has released the ball before Stills completely turned towards the endzone. With the ball in the air, Hughes (yellow arrow) is five yards behind the Saints receiver. 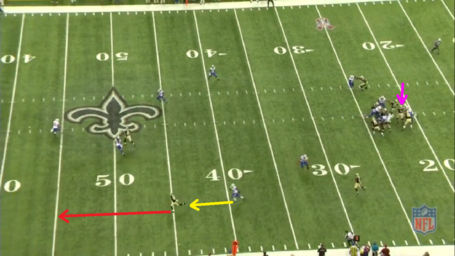 By the time Stills turns around, the ball is dropping in his basket. 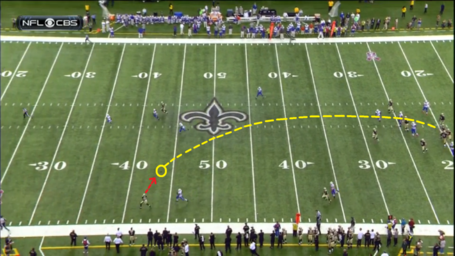 And Jerry Hughes is cursing that damned play-action fake. 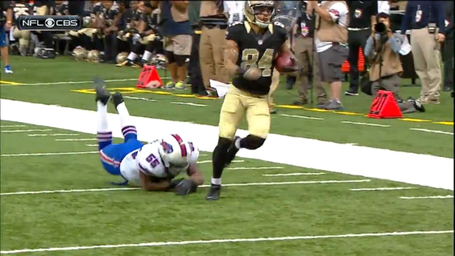 Once again, the Saints have Kenny Stills (red arrow) in motion before the snap. The motion allows Brees to see which Bills defender adjusts to Stills' position on the line of scrimmage, thus helping him decipher any disguised coverage/blitz. 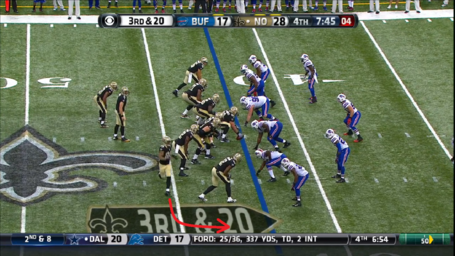 With the Bills playing with a single deep safety, New Orleans tries once more to exploit a double move route. Here Stills runs a post-and-go route. The goal is to draw the deep safety (blue arrow) and the cornerback (yellow arrow) towards the seam on the post move, then run downfield towards the endzone. From the snap however, Brees (pink arrow) is under heavy pressure and forced to leave the pocket. 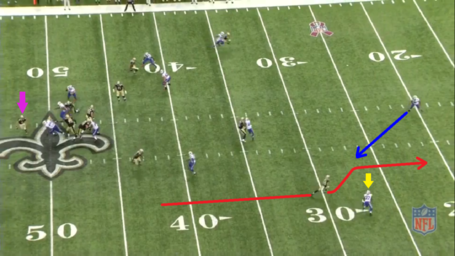 As he escapes the pocket, Brees (pink arrows) has two options downfield: wide receiver Marques Colston (yellow arrow) who is single-covered, or Stills (red arrow) who is bracketed by the Bills deep safety and cornerback Nickell Robey. 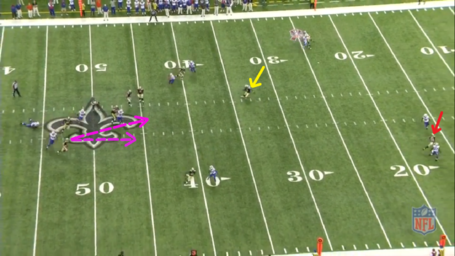 Like the wily veteran that he is, Brees glances off to his left towards Colston. His eyes draw the safety towards the middle of the field, leaving Stills in single coverage with Robey. As Brees throws to the endzone, Stills (red arrow) adjusts his route towards the corner. 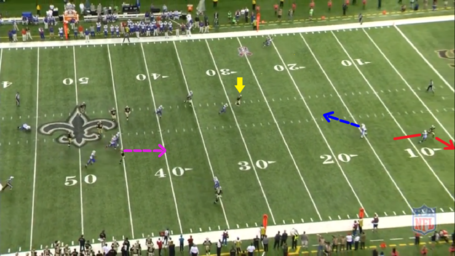 Stills absorbs the contact from Robey while catching the ball in the air and manages to hold on to it. This is quickly becoming a hallmark of his young career: the kid can take a hit. 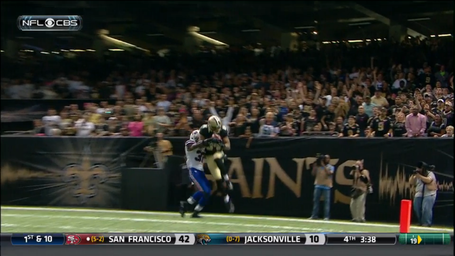 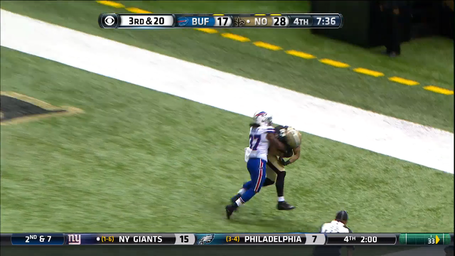 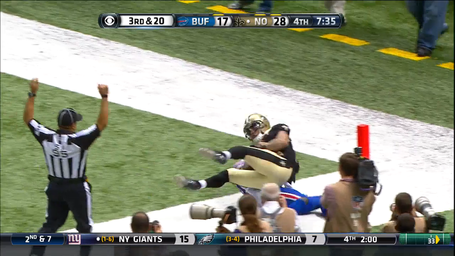