Here's your chance to win a free DVD of the NFL RUSH ZONE, which is being released to the public today! How better to brainwash young ones into loving the right team... than showing them a cartoon episode with Drew Brees and Jimmy Graham every Sunday morning, before game time?

If you were to make a superhero out of a Saints player: who would it be, and what would his power(s) be?

On November 12, Gaiam Vivendi Entertainment and the National Football League (NFL) release NFL RUSH ZONE: Season of the Guardians, Volume 1 on DVD. Rush Zone airs Sunday mornings before NFL action kicks off each week, and has been well-received among children and their parents alike.

Here at Canal Street Chronicles, we're giving away three free copies of the inaugural DVD to our members and fellow fans. Are you a fan of cartoons; or do you have a child, relative, or friend who is? Would you like a free copy of the first volume of this show to be released, including an episode with Drew Brees and Jimmy Graham? Pick a player on the New Orleans Saints that you would make into a superhero, and tell us what his super power(s) would be. You can also feel free to post pictures of a young Saints fan, all decked out in fan gear, or try anything else you'd like to convince us that you should receive one of the first copies of this DVD. Respectful fans from other teams are more than welcome to participate, as well!

Even if you wouldn't want a copy sent to you, don't let that stop you from participating! If you want to come up with your own Saints superhero, or post fan-tastique pictures, just for the fun of it... please do! You can just add a note to any of your comments, saying you'd like to leave the DVD's for other participants (or something to similar effect); and you won't have to worry about choosing which niece or nephew is your favorite.

For those who are interested in receiving a free copy of the DVD, the decision will be made with complete subjectivity -- possibly adding a randomizer, or a blindfold and a suction-cup dart gun aimed at the screen -- by Friday... and posted sometime soon after. 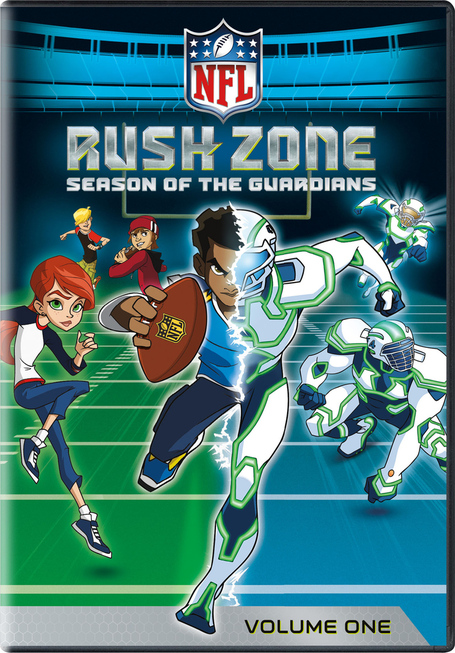 NFL RUSH ZONE: Season of the Guardians, Vol. 1 is the inaugural DVD release of the Emmy-nominated animated series, NFL RUSH ZONE. The two-hour action-packed DVD hits stores today (11/12/13). Each episode in the series features past and present NFL players and coaches voicing their animated personas, including Drew Brees, Rob Gronkowski, Greg Jennings, Calvin Johnson, Rex Ryan, and DeMarcus Ware. NFL RUSH ZONE is sure to be a winner with young football fans and their parents. The 11-episode DVD is available for order now at NFLShop.com