So, is Mark Ingram suddenly who we thought he would be three years ago? Or is he just who we have seen him be for three years? Only time will tell. For now, what the film shows is that Ingram ran with decisiveness and discipline against the Cowboys.

After what can aptly be described as a lousy game against the New York Jets the previous Sunday, the New Orleans Saints rebounded in the most emphatic fashion when they played the Dallas Cowboys on Sunday night.

By now, you've certainly read all about the mesmerizing performance by the Saints, who had 625 yards of total offense and set a National Football League record by having 40 first downs in a 49-17 rout of the hapless Cowboys.

Not to be overlooked in the Saints' overall gaudy numbers, were those coming from New Orleans' running game. Against Dallas, the Saints had 38 rushing attempts for 242 yards. Prior to that game, they were averaging less than 90 yards rushing per game and ranked a paltry 26th in the NFL.

At the heart of the rushing explosion, the biggest surprise was undoubtedly Saints running back Mark Ingram. After playing the first two games of the season against Atlanta and Tampa Bay, Ingram had rushed 17 times for 31 yards (an average of 1.8 yards per carry).

He then was inactive for the next 5 games, before rushing only 4 times for 19 yards against the Jets last week. Although his yard total was poor against New York, Ingram averaged 4.8 yards per carry. That may have been a sign of things to come Sunday night against Dallas.

A good running back is nothing without a good offensive line and good blockers on the outside. Sunday night, the Saints had their best all-around running game of the 2013 season. However, Ingram's contribution was significant. For the first time in a long time, he showed decisiveness and discipline in his running form. He finished the night with 145 yards on only 14 rushing attempts (a whopping 10.4 yards per carry).

Here's a film breakdown of two of Ingram's best runs against Dallas on Sunday night and what made them successful.

On this first play, the Saints line up in the I-formation, two receivers on the left and a single receiver on the right to spread Dallas' defense out. The Cowboys show a traditional 4-3 look with four down linemen, three linebackers in the box and a single deep safety. 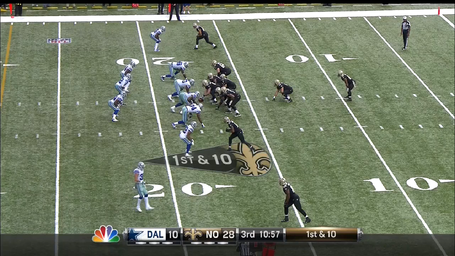 The run is designed to go to the B-gap between right tackle Zach Strief (#64) and right guard Jahri Evans (#73). Ingram (#22, red arrow) follows his fullback Jed Collins (#45, yellow arrow) who had an outstanding blocking night. 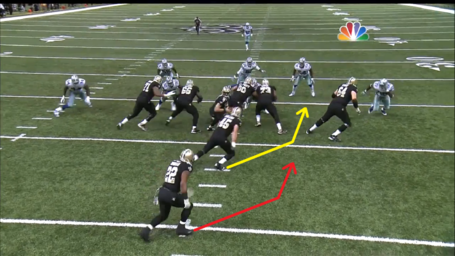 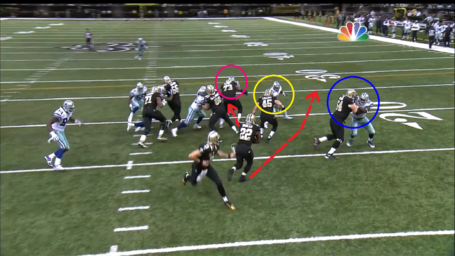 Ingram makes the good decision (solid red arrow) instead of the great one (dashed red arrow), probably following his running back instincts of cutting upfield as soon as a hole opens up. 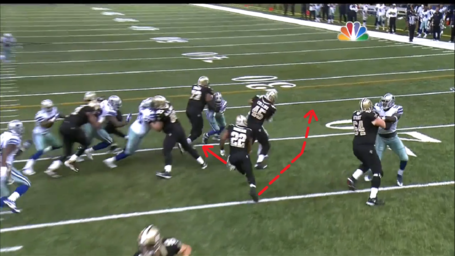 This choice makes his life a little bit more difficult, but Ingram is able to squeeze through a rapidly closing running lane while absorbing the contact from Cowboys defensive end/tackle Jarius Wynn. 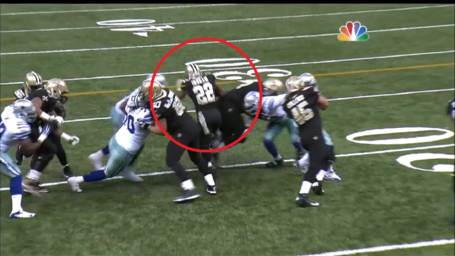 He breaks the tackle from Wynn who ends up on the ground and darts into the open field. 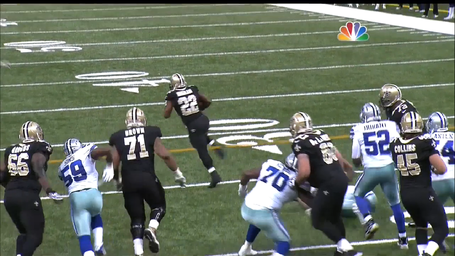 He is brought down by free safety Barry Church after a very good gain of 14 yards. 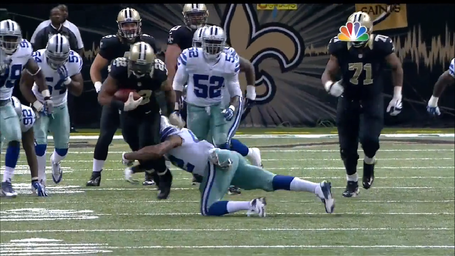 With the Saints having success rushing the ball throughout the game, the Cowboys start subtly moving their safeties up for run support and end up with eight men in the box. With more defenders inside, Sean Payton called a beautiful off-tackle run to the left, with the stacked wide receivers as outside blockers. 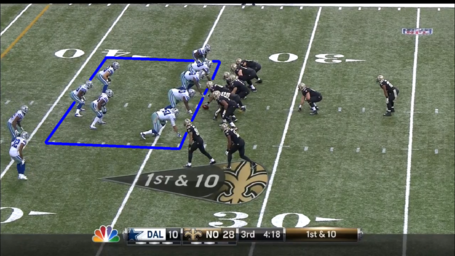 After the handoff, Ingram (red circle) has to stay disciplined and follow his fullback (yellow circle, yellow arrow) to the left, while wide receivers Marques Colston and Kenny Stills (pink arrows) go out to block the defensive backs. 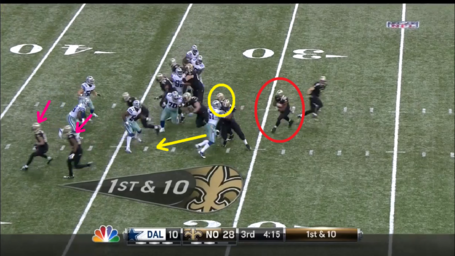 Once more, Ingram has a choice: he has a tight running lane opened upfield by right guard Jahri Evans (dashed red arrow), or the better option, which is hitting the flank (solid red arrow). Helped by a great seal block by Collins on Bruce Carter (yellow circle), he doesn't hesitate and goes to the outside. 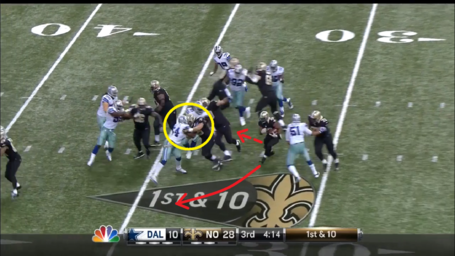 The key to this run is Ingram trusting every single designed block and not go upfield too soon. As he gets ready to square his shoulders, he shows patience by letting wide receiver Kenny Stills block free safety Barry Church (pink circle). 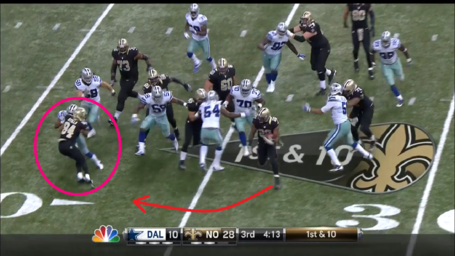 Church doesn't have a prayer as Stills takes him to the ground (pink circle). Meanwhile, Colston also sustains his block on cornerback Orlando Scandrick (blue circle), allowing Ingram to get upfield towards the first down. 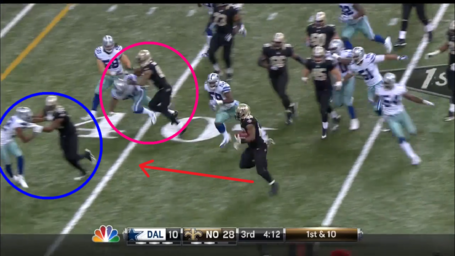 As stated earlier, there aren't many good running backs that do not benefit from great blocking at every level. Colston finishes his block on Scandrick, allowing Ingram to get to the first down. Meanwhile, a proud Kenny Stills savors the fruit on his labors (dashed pink arrow). 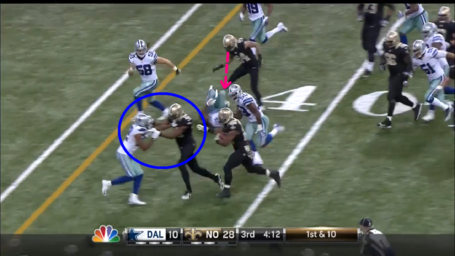 Ingram is tackled by the facemask after a 15 yards run. With the personal foul penalty, the play results in a 30 yards gain. 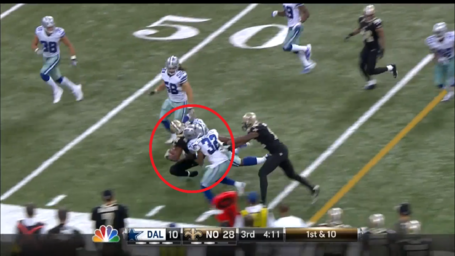 At this point, it would be overly optimistic to expect Mark Ingram to have this kind of production night in and night out. In fact, if his NFL career trend is any indication, he might run for 18 yards on 10 carries next week against the San Francisco 49ers.

However, if the proverbial "light" came on for him last Sunday night, with a little help from this Saints offensive line, slightly delusional optimism might just turn into very exciting reality.