Saints vs. 49ers 2013: Since When Did You Become The Physical Type?

In a long-anticipated matchup, the New Orleans Saints get another shot at the San Francisco 49ers. Can they finally turn the tables on their tormentors?

Share All sharing options for: Saints vs. 49ers 2013: Since When Did You Become The Physical Type?

All of the "Bullygate" news with Jonathan Martin and Richie Incognito has put bullying in the spotlight recently, but that story goes beyond some meathead being a bully. When I think of a bully, two images immediately come to mind. First is cinematic 80's icon Biff Tannen from Back to the Future. 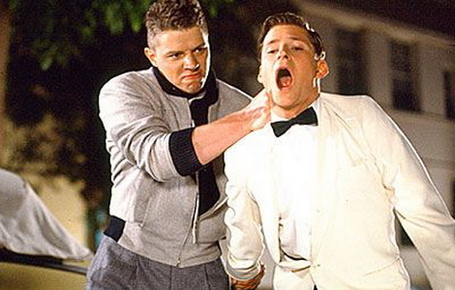 And the other is the New Orleans Saints' personal tormentors, the San Francisco 49ers. 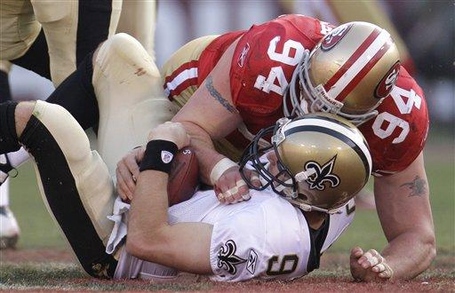 The two have striking similarities when you think about it. Both are intimidating yet dimwitted, using brute strength and a lack of subtlety to get their point across.

The 49ers have played Biff Tannen to the Saints' George McFly for a very long time, dating back to the old NFC West days when the two were division rivals. Every time the Saints found a way to put together a great season (which wasn't too often), the Niners were there to top it, with a resounding "What are you looking at, Butthead?" The Saints go 12-3 in 1987, "Hello? McFly?," the Niners go 13-2, 2nd place for the Saints. The Saints go 12-4 in 1992, surely good enough for 1st place, "Don't be so gullible McFly!," the Niners go 14-2. Once again, as usual, San Francisco was a step ahead of the Saints, dashing their hopes of being on top.

When the Saints were down, the Niners would handle them, and in the pre-Harbaugh years when the Niners were down, the Saints dispatched them in return. But when both teams were and are at their best, the Niners still manage to best the Saints. The most crushing defeat coming famously in the 2011 NFC Divisional Playoff, a story too bitter and cruel to rehash again here. The loss still stinging Who Dat Nation to this very day. That afternoon Biff did a number on McFly when it seemed he'd finally have the upper hand, but then... POW!... sucker punch to the gut.

The following season, the Saints had the opportunity to exact some revenge on the bully, but instead things just got worse and... 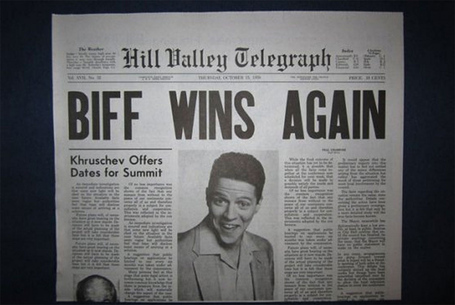 It wasn't even as close the second time around, and at home no less. It wasn't so much the loss as it was the way that it happened. The Saints were absolutely manhandled, like Lorraine Baines at the Enchantment Under the Sea dance. 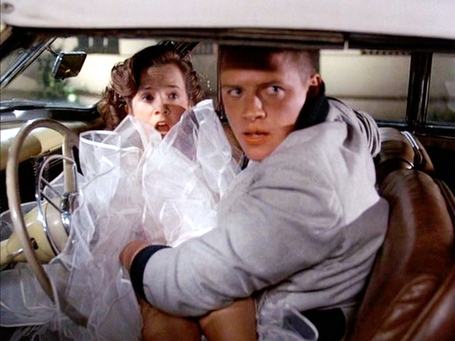 It was cruel that afternoon, just look at the photo of Marques Colston at the top of the page, it says it all. I distinctly remember that play and many others like it. I don't recall other games where the Saints took as much physical punishment as that one. I watched the Saints players take such punishment that day that I called out to the television like that scene from Rocky IV, "Throw the damn towel!!!" It's like the Niners hit harder and louder than any other team I'd seen the Saints play in recent years. Another season, another dreadful loss to the Niners.

At last, another chance for redemption presents itself this season. Another chance to stand up to the bully and finally put him in his place. Once again at home, but this time with their head coach on the sideline. Can the Saints reverse this trend of torment? Is this the year, is this the game? Well, the Saints are going to have to do some things differently than the last two meetings.

First and foremost, the Saints absolutely have to cut out the turnovers. Each turnover is like flinching every time Biff feigns a punch. 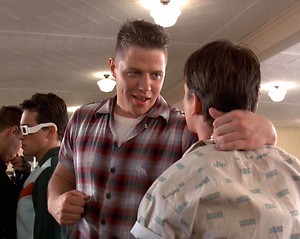 The Saints gave up 7 turnovers combined in the two previous meetings, including 2 pick-sixes in the last game alone. The turnovers absolutely have to stop. With the Niner passing offense struggling, it is unacceptable to spot them points or field position off of bad plays or miscues. You obviously don't volunteer to be put in a Biff Tannen headlock.

Teams that have beat San Francisco this season have done it by beating them at their own game. An example would be Carolina picking up the victory at Candlestick last week, getting their own marquee road victory (don't get me started on that one, ugh). For the Saints though, it would be foolish to deviate from what they do best on offense, they just need to do it more effectively than the last two times. They do need to be more physical on defense than the previous meetings, and this is where the biggest difference will be found.

Rob Ryan wasn't around for the last two games. For those, the Saints had the reckless and stubborn Gregg Williams, followed worse yet by the timid and uninspired Steve Spagnuolo. Rob Ryan shares none of these traits, and his defense will be ready to match the physicality of the 49er defense, setting an unflinching tone for the Saints this year. Should Kenny Vaccaro play, fantastic, if not, there are others ready to play with passion and confidence the likes of which Harbaugh's Niners haven't seen from the New Orleans Saints. Like a truckload of manure, Tannen's finally got something to worry about.

This Sunday, the time has finally come. The Saints will overcome their own bully, and just like George McFly, they'll knock 'em the hell out.

Instead of a stiff left cross to the jaw, the Saints will connect with patience and precision on offense, and a defense that will be more than ready to prove who the best on the field really is.

After last season's game, I told myself I'd never pick the Saints to beat the Harbaugh Niners because he'd built them to handle teams like the Saints and they'd been successful each time they faced them. This game though, is the definition of a "Bat Game" for the Saints, and I expect them to break out the bats for this one. Before the season, I subscribed to the saying, fool me once, shame on you, fool me twice, shame on me. Well, Let's just say I've still got faith in McFly and the time to change the future is now.

The Saints are going to win, and the weight will be lifted this Sunday.

So Niners, in the immortal words of Biff Tannen himself, " Make like a tree... and get outta here."