A personal foul penalty for a blow to Drew Brees' head/neck called on linebacker Ahmad Brooks late in the Saints' 23-20 win over the San Francisco 49ers may have changed the outcome of the game. Should it have ever been called?

Share All sharing options for: Was Ahmad Brooks' Hit on Drew Brees Legal?

Late in the fourth quarter and down by a field goal, Saints quarterback Drew Brees took a crushing hit from outside linebacker Ahmad Brooks and fumbled the ball away on a crucial 3rd and 2 play.

The hit by Brooks drew a 15-yard personal foul penalty for a blow to the head and neck area of a quarterback. So instead of the Niners getting their fourth turnover of the afternoon on their way to possible victory, the Saints' drive is extended and yada, yada, yada, Garrett Hartley, yada, yada, yada, the Saints win.

It was a game changing play.

Here's a closeup of the controversial hit in question.

Drew's eyes look freaky and the motion of his neck looks unnatural, as his head remains still but his body is forced backward. As bad as the hit may have looked on TV, it looked even worse from my seat in the Superdome. Drew never sees the it coming or has a chance to protect himself. I really can't believe he walked away unscathed. Brees even busted his mouth on the play. 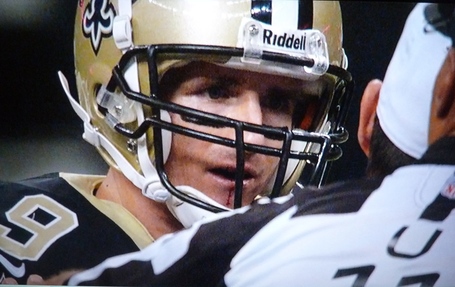 But does any of that make the hit illegal? Did it just look worse than it really was? There's no initial contact to the head or face. Brooks does have his arm wrapped around his neck and is bringing Brees down however.

David Fucillo over at Niners Nation understand the call but thinks it was probably legal. Frank Schwab also thinks it's questionable. Former NFL head of officiating Mike Pereira, however, says it was absolutely the correct call.

Clearly a foul in New Orleans - that was a blow to the neck.

It's a tough call, for sure. Opinions are going to vary. What do you think?