The New Orleans Saints' stellar defensive play has been a pleasant surprise this season. But after ten games, it shouldn't be a surprise anymore. Rob Ryan's defensive unit is playing at an elite level and perhaps even Saints fans are having a hard time coming to terms with that reality.

Test how precise your football knowledge is by playing the Precision Play of The Week for a chance to win Super Bowl tickets – brought to you by Gillette Fusion ProGlide, precision comfort, even on sensitive skin.

As I was watching the Monday Night Football game along with some Saints fans, I kept hearing many of them marvel at the Carolina Panthers' defense as they beat the New England Patriots while holding them to only 20 points.

I heard phrases like: "They're so physical," and "That front four is scary." Another one that came back several times was "Saints better be ready for this defense later in the season." All were valid statements.

What I couldn't help but think however, was: those Carolina Panthers also have better be ready for the Saints defense. And you know why? Because it is just as physical and its front four is just as scary.

Is it because historically, since the arrival of Sean Payton in New Orleans in 2006, the Saints' defense has usually been ranked in the mid-20s in the National Football League? Is it because of the scars left by the all-time bad unit that New Orleans fielded amid all the turmoil in 2012? Whatever the reason for their incredulity, 10 games into the season, many Saints fans are still looking for someone to pinch them when they read the National Football League defensive rankings.

In case you were wondering about said rankings, here is how they read: New Orleans is 4th in the NFL in total defense, allowing 305.4 yards per game. They are the 3rd passing defense with 191.4 yards allowed per game and 5th in the league in points allowed with 18.3 per contest. In what is considered their defensive weakest point, the Saints are a respectable 17th in the league, allowing 114 rushing yards per game.

This Saints defense is good; very good. What's more, they're not getting it done with smoke and mirrors.

This 2013 Saints defense has been doing it with a fearsome front four that has harassed opposing quarterbacks for 60 minutes in every game. After 10 games, they have already tallied 32 sacks, which is tied for 6th in the NFL (they had 26 all of last year).

On Sunday, in their thrilling 23-20 victory over the San Francisco 49ers, the New Orleans Saints defensive unit was at it again. Cam Jordan and company held a second straight team under 200 total yards (193 for the Cowboys and 196 for the 49ers).

Lost amidst the controversy on a roughing the passer call that went against the 49ers late in the game is that San Francisco had the ball with the game tied at 20 and 2.06 left on the clock. They needed only a field goal to possibly win the game. The Saints defense would have none of it.

Let's take a look at two key plays that allowed New Orleans' defense to force the Niners into a three and out and get the ball back for their offense, allowing Drew Brees to engineer a two-minute drill that culminated with Garrett Hartley kicking the 31-yard winning field goal.

With the ball on their 20-yard line, San Francisco lined up with three receivers on the right and a single wide on the left. New Orleans played a Cover 2-Man defense with 2 deep safeties to keep the ball in front of them. The key players here are right defensive end Junior Galette (red arrow) and outside linebacker/defensive end Keyunta Dawson (yellow arrow). 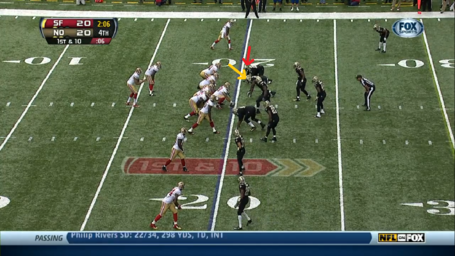 From the Coaches Film view, we can see the clever design of the Saints defensive front. New Orleans runs a stunt between Galette (red circle) and Dawson (yellow circle) in order to confuse the 49ers left tackle and left guard in their blocking assignment. 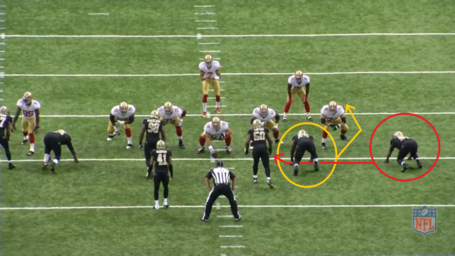 After the snap, Galette (red circle) takes a step forward and darts to his left, while Dawson (yellow circle) crosses him and rushes to the right. 49ers left tackle Joe Staley (#74) who was going to block Galette now has to switch to Dawson. The left guard, Adam Snyder (#68) inversely, has to switch from having to block Dawson to blocking Galette. 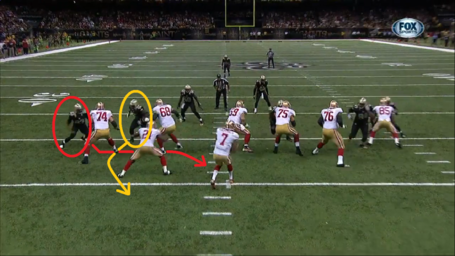 But as Staley switches, Snyder (blue arrow) doesn't and stays with his initial assignment, which was to block Dawson (yellow circle). That frees Galette (red arrow) on his inside move towards 49ers quarterback Colin Kaepernick. 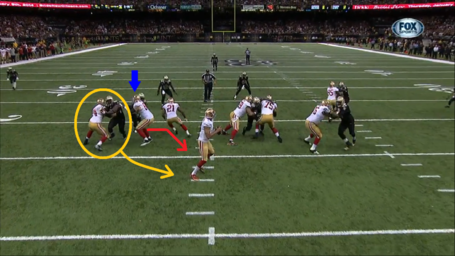 Galette now has an unimpeded path to Kaepernick, while Dawson is about to split the double team of Staley and Snyder. The 49ers quarterback meanwhile is eyeing wide receiver Anquan Boldin (pink circle) who is running a deep drag route while being guarded by Saints cornerback Chris Carr. 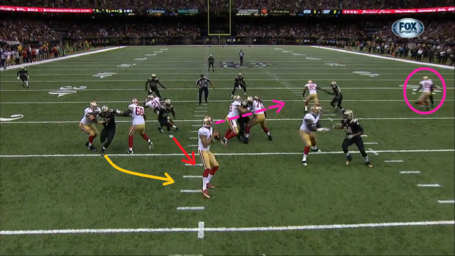 Boldin is coming open, as Carr stumbles (pink circle). Fortunately for the Saints, Galette is upon Kaepernick and forces him to spin inside the pocket and to escape to his left. 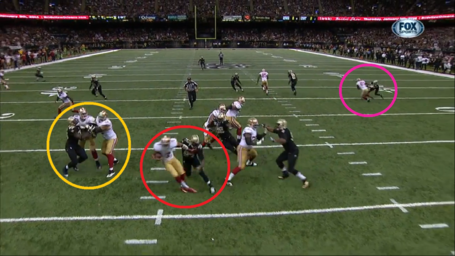 Dawson has also beaten the double team of Staley and Snyder and both he and Galette sack Kaepernick for a 9 yards loss. A wide open Boldin can only watch a golden opportunity go by the wayside. 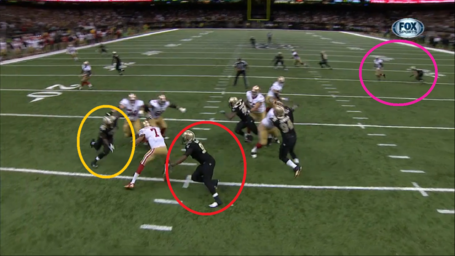 With the Niners now desperate for a big play to keep their drive alive, the Saints showed a four-man front, while playing off San Francisco's receivers, giving them the underneath throws. The key player in this sequence is New Orleans' left defensive end Cameron Jordan (red circle). 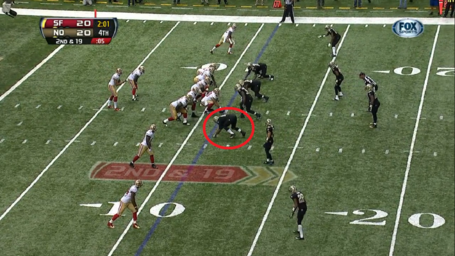 An alternate view before the snap allows us to see the tackle box (blue lines), which is important in the outcome of the play. 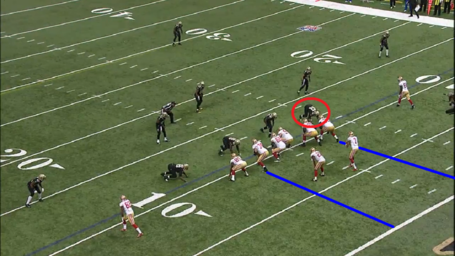 After the snap, the Saints rush only four and Kaepernick's outlet, running back Frank Gore (pink circle) is wide open underneath. However, backdoor pressure from Junior Galette (yellow circle) forces the Niners quarterback to try and roll out of the pocket to his right. 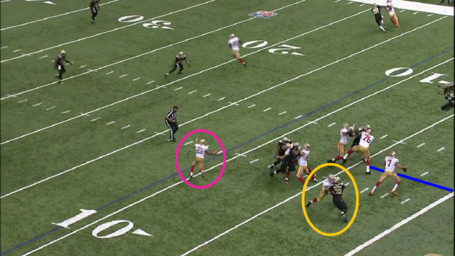 As Galette beats Staley on the blindside, Jordan (red circle) beats the double team of the 49ers right tackle and right guard and is bearing down on Kaepernick. At this point the 49ers quarterback is clearly outside the tackle box (blue line). 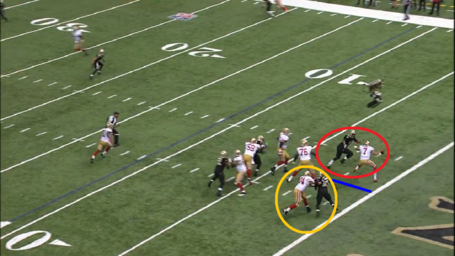 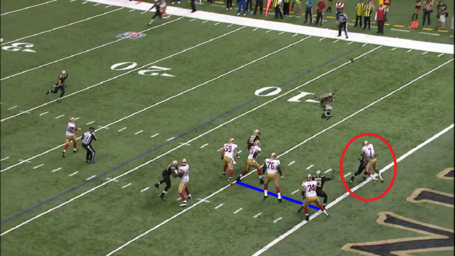 As San Francisco got into its third down and 19 play, the Saints defense had held them to minus seven yards in the quarter. Minus seven! 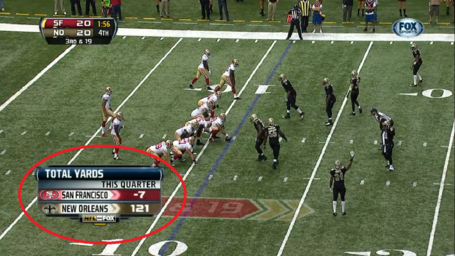 San Francisco would end up with an outstanding nine total yards in the quarter, as Kaepernick would scramble for 16 yards before his team had to punt. The rest of the game is history.