In the Monday Night Football game between the New Orleans Saints and the Seattle Seahawks, one crucial matchup to keep an eye on is going to be Saints defensive end Cam Jordan against Seattle's tackles. Here's a film breakdown on what has made Jordan one of the most feared pass rushers in the NFL this season.

When the Seattle Seahawks welcome the New Orleans Saints at Century Link Field on Monday night, most of the attention will undoubtedly be focused on the high-powered Saints offense led by Drew Brees, clashing against the fierce and hard-hitting Seahawks defense led by the fearsome "Legion of Boom."

What pundits and fans alike shouldn't overlook is the matchup that might turn out to be the most important in that game: the new and improved New Orleans defense against the mistakenly underrated Seattle offense.

Although they rank a modest 12th in yards per game on offense (358.5), the Seahawks are the second highest scoring offense in the National Football League (27.8 points per game), behind only the Denver Broncos (39.0 points per game).

Moreover, when using the advanced statistics created by Football Outsiders (DVOA), the Seahawks are actually rated as the 6th offense in the NFL, with a 12,2% rate over the league average. You can find a concise explanation of the DVOA and the ratings here.

The key cog in this New Orleans defensive unit this season has unquestionably been third-year left defensive end Cameron Jordan. After tallying nine sacks in his first two seasons, Jordan has already recorded 9.5 sacks in only 11 games in 2013. He leads a Saints team that is in the top five for total sacks in the NFL this season with 37.

What are the attributes that have made Jordan so effective in his first year under defensive coordinator Rob Ryan? Let's look at the tape.

On this play in the 3rd quarter of the Saints game against the Atlanta Falcons in week 12, Jordan (yellow circle) is lined up at the 5-technique, on the outside shoulder of Falcons right tackle Jeremy Trueblood (red arrow). 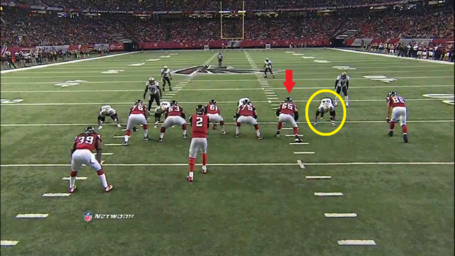 After the snap, Trueblood seemingly wins his one on one battle with Jordan by pushing him slightly past quarterback Matt Ryan (#2). 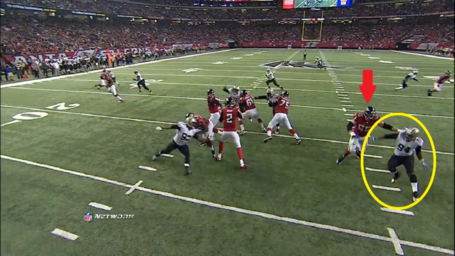 Jordan however, shakes off the right tackle by planting his foot and spinning towards Matt Ryan who is trying to escape the pocket to the right. 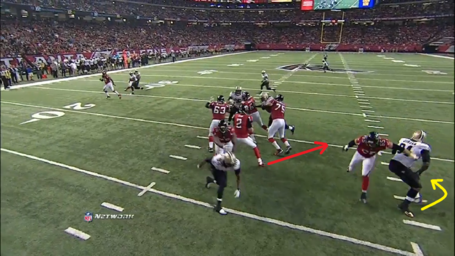 The slow-footed Ryan has no chance and is sacked by Jordan for a 2-yard loss. 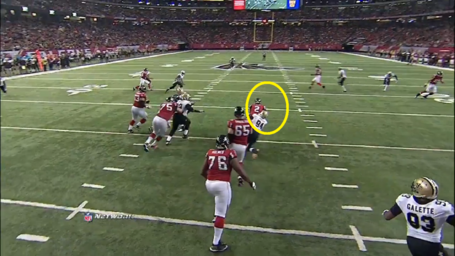 To better appreciate Jordan's quickness in his change of direction, here's a GIF of the play.

Jordan shows that he'll torment left tackles as well as he does right tackles. On this play against the Falcons, he is lined up on the right side of the defensive line (yellow circle) opposite Atlanta's left tackle Garrett Reynolds (red arrow). 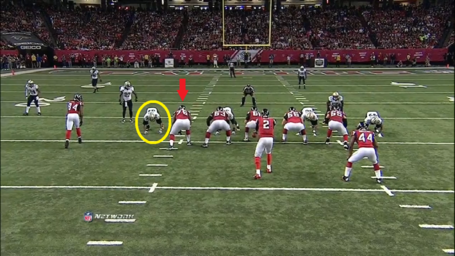 After the snap, Jordan uses a combination of power and quickness to get rid of Reynolds. 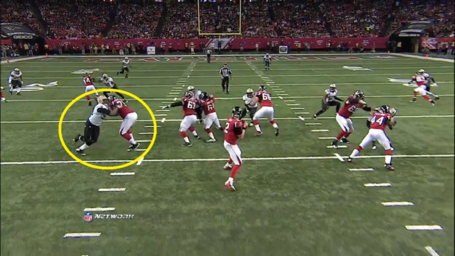 Once again, he shows the ability to plant and quickly turn the corner towards the quarterback. 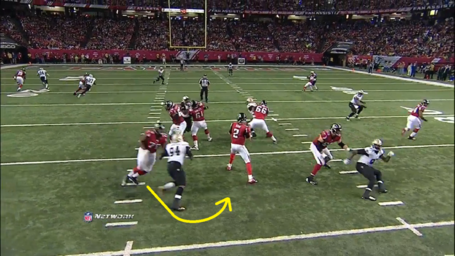 He sacks Ryan for a five yards loss. 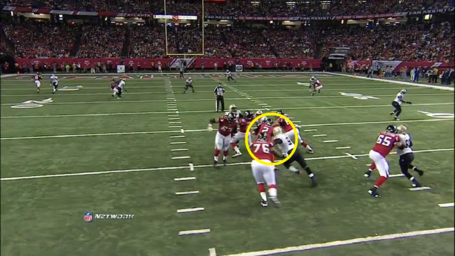 Here's the GIF of the play.

One technique that Jordan has increasingly and successfully implemented in his game this year is the hand-slap. Combined with his quickness, that has allowed him to shed the blocks of slower tackles and get to the quarterback faster.

This was in full display on this sequence against the San Francisco 49ers. Jordan (yellow circle) is at his alignment of predilection, the 5-tech, opposite 49ers right tackle Anthony Davis (orange arrow). 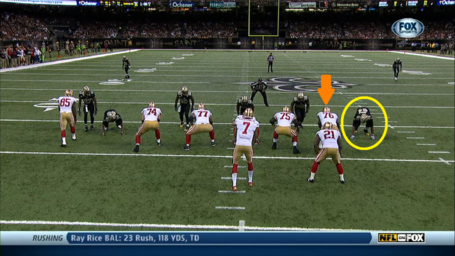 After the snap, Jordan slaps Davis' arms away from his body with his right hand and then shoves him aside with his left. 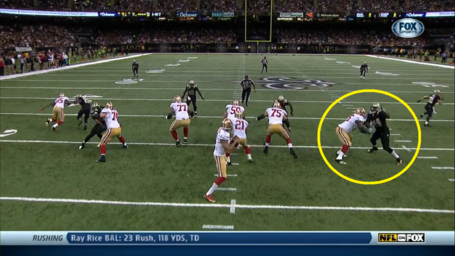 In a split second, Davis is in trailing-mode and Jordan has his eyes set on 49ers quarterback Colin Kaepernick (#7). 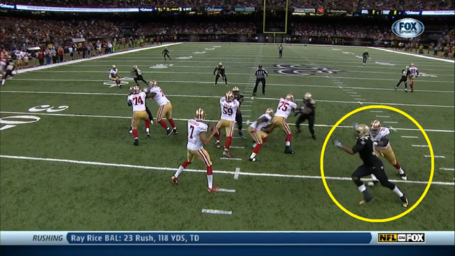 Kaerpernick tries to escape upfield, but Jordan is upon him in a heartbeat for a 2-yard sack. 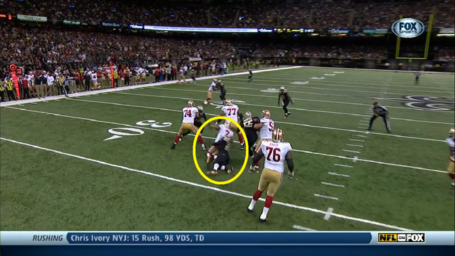 Because you guys are awesome, here's a GIF of that play.

The word "edge-rusher" is often used to describe defensive ends. However a complete pass rusher has to have the ability to pressure the quarterback inside when the offensive formation calls for it.

On this play against the Buffalo Bills, Jordan (yellow circle) is lined up against right tackle Erik Pears (#79, blue arrow) who has potential blocking help from tight end Scott Chandler (#84, blue arrow). 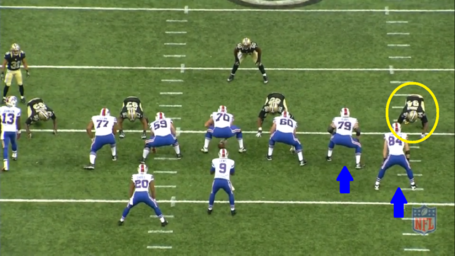 Jordan uses a swim move to get to the inside of the tackle, which takes Chandler out of the equation. 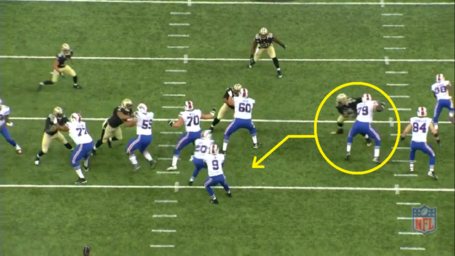 As Jordan has Pears beat, running back Tashard Choice (#20) is all that stands between the Saints rusher and quarterback Thaddeus Lewis. 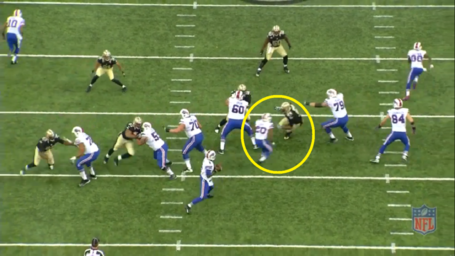 Choice (blue arrow) decides that his health is more valuable than that of his quarterback and avoids Jordan like a matador. He releases in the flat while Thaddeus Lewis has nowhere to go but down. 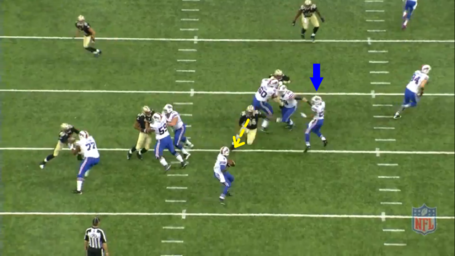 Jordan sacks Lewis, causes a fumble and recovers the ball. 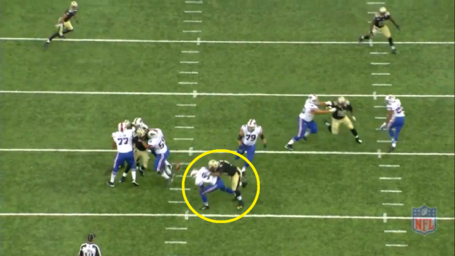 Here's a GIF of the awesomeness of this play.

On Monday night, with both of the Seattle Seahawks starting tackles (left tackle Russell Okung with a toe and right tackle Breno Giacomini with a knee) having recently returned from serious injuries, their matchups with Cameron Jordan will certainly be worth keeping an eye on.