CSC's own vjdancer (aka the Jersey Who Dat) attended the recent Saints-Jets game with a friend from work, and was kind enough to share her "View from the Jersey Shore" with us.

My First Game: Saints vs. Jets - Observations and Lessons Learned

I went to my first professional football game this past weekend and with the exception of that ugly "L" - it was a pretty positive experience.

My companion was a friend and coworker who is a lifelong Jets fan. My "ultimate game weekend" plan originally included trying to stay at or very near the hotel where the team stays on Saturday night and hopefully find a way to get some Saints autographs. Unfortunately, her brother had the nerve to go and plan his wedding on OUR football weekend so we ended up having to stay about an hour south from the stadium, close to where we're both originally from so my friend could attend to all this wedding business. Settled in my room, catching up on twitter and I see Jon Oliver got to meet The Leg!! Aaaaaaaggghhhhhhhhhh. (Nothing against, Jon - happy for ya, just bummed I wasn't there!!)

Lesson Learned: Stay at or near the team hotel! If your game buddy has to stay somewhere else for weddings, funerals, christenings or some other unimportant crap on game weekend, meet up with her at the gate or something.

Anyway, Jetgirl (my friend Terry) and I left the hotel early Sunday because we had this weird idea we might do some tailgating. I was thinking stadium food would be ridiculously expensive, and since Stub Hub didn't mention anything about buying a parking pass when I got my tickets - we had no idea how much we'd have to pay to park. So we decided to get a little cooler and bring some sandwiches, chips and fruit. And if that already sounds like the worst tailgate ever - add in the fact that at 10:30 in the morning, the wind was whipping around that parking lot and it felt like it was about 30 degrees - and you'd be right!

There were plenty of real tailgaters out there though. With their grills going and their lawn chairs and canopy tops extending out the back of their SUVs...but we, were not one of them. We didn't know any of them. We just kind of sat in the car and tried to wait until 11:30 or so to eat so we wouldn't be starving by the 3rd quarter and have to hand over our first born child for a slice of pizza.

If I hadn't been there - my super sociable buddy definitely would have found herself a party to crash. She finagled herself a free beer pretty easily in the 5 minutes we ventured outside the car, but I just wasn't feeling it. The wind, the cold, or all the green and white. I also wasn't aware that I was missing the part where the players come out and warm up and sometimes SIGN autographs for fans!!

Lesson Learned: Screw tailgating in cold weather - go in early as possible and try to get autographs! If this means bucking up the extra cash for stadium food earlier and more often, so be it. Good pictures or an autograph from any of the Saints would have been well worth the price of a $15 hot dog. If that's how much it costs - I still don't know. The only thing I bought in the stadium was a $5 watery Dunkin' Donuts hot chocolate.

Who Dat Nation was better represented than I thought! And not just in the "Visitor's Section" - where I must say...we had great seats! Section 143, Row 9, Seats 20 & 21. Unfortunately, I am no Dave Cariello when it comes to photo journaling "The View" from my section, but if I had a slightly better camera - and knew how to set it for action shots - I think I would have made him proud. #nexttime

Lesson Learned: Buck up for a new camera. I've had my eye on one for a while and this is about the third thing I've been to where my "good seats" are still just a bit too far out of range of the max zoom on my current camera. I keep seeing Drew shaking his head at me saying, "Missed opportunities" in that strange way he pronounces "opportunities" that sounds like there's no second "t", and I'm shamed.

When I saw our seats - I really wished I had made my sign. I had it all planned. An outline of the State of New Jersey with ‘Not All Who Dats are born in NOLA" across it. Or - just "JERSEY WHO DAT". The team would have totally seen it with ease. Especially while they were just milling around the end zone right in front of me waiting to go back in and come back out for introductions.

Lesson Learned: Sooo glad I didn't actually make the sign. Maybe it's just a College Game Day and Saints home game thing? Nobody had signs!! Not even the Jets fans. I can be shy sometimes so I probably would have gotten all self-conscious and not held it up anyway. Or held it up and drawn the attention of an obnoxious Jets fan.

Thankfully, it wasn't really that cold. I was worried about this part spoiling my enjoyment of the game. I mean, it was chilly, but I never felt as cold in the stadium as I did in the parking lot and I never had to break out my final layer - my long, down coat. While it is all black, it would have seriously covered up all my black and gold layering. I was happy to have spent the entire first half with just my turtleneck, Brees jersey, Saints fleece headband and gloves on. By the time 4th quarter rolled around and the sun had long passed over us to the other side, I was just putting on the Saints Football fleece. Go me. 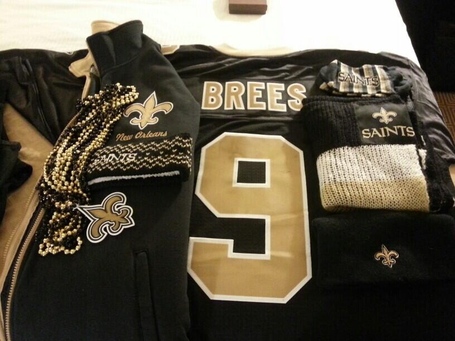 Lesson Learned: Outdoor stadiums in cold weather climates are the dumbest thing ever. Seriously, keep them to September/October, just to be on the safe side.

I know most of the tv commentary guys are not very well liked by the veteran fans, but man I missed a ton of stuff! There seemed to be a lot of standing around and not only did nobody remind me how Jimmy Graham used to play basketball, or that Drew Brees is short and his favorite receiver is the open one, but I didn't know Darren Sproles was hurt and out of the game either! Now, I did notice that Lance Moore and Travaris Cadet were fielding the punts but I totally missed Sproles going to the locker room. Ditto for the Jets' Jeremy Kerley. And they probably walked right past me because my seats were on the visitor side, towards the end zone.

Lesson Learned: Heck, I don't know - pay attention better? I would have sworn I was paying attention - it's not like I was knitting between plays or anything. I don't know...I got nothin'.

I think I might have come away with some Jets sensory overload issues. It was loud there. And lots of green & white. That freakin' annoying jet engine winding up. The PA guy yelling "And that's a Jets..." and the crowd screaming "First down!" The little trivia contest with Jets players holding up letters and acting silly. Jets players making the "be nice to the other fans" PSA - and most importantly ONLY showing Jets highlights during game breaks. Bleh. I still don't know why that Jet hitching a ride to the end zone on the back and legs of Jimmy Graham was replayed a few times.

Lesson Learned: There is no place like Dome. I have to go there.

Overall, I had a really good time. My friend is much less of a sore winner than she is a loser (and since she drove, maybe it's a blessing in disguise that the Saints lost) and I'd probably want to go to another Saints road game. Just probably not in NJ. Maybe Tampa or Carolina. But first I have to get to the Superdome.