Saints Win Over Panthers Was Never In Doubt

On Sunday night against the Carolina Panthers, the Saints did what they always do at home in primetime: they dominated the competition, and the outcome was never in question.

Share All sharing options for: Saints Win Over Panthers Was Never In Doubt

It's almost unexplainable. Once daylight has faded, and the moon shines bright over the Crescent City, the New Orleans Saints transform from a high-caliber team into an unstoppable one. The Saints at home, in the Superdome, are tough enough to contend with on a Sunday afternoon, but in primetime we've seen countless opponents discarded without so much as an afterthought.

It is for this reason that as soon as NBC flexed this Week 14 game against the Panthers into primetime, I posted the following comment:

You’re in for it now!

Why double the score you may ask? Simple, the Saints usually double up their opponents in Sunday Night Football home games. The only exceptions being, the Saints coming up 3 points short of doubling the Lions in 2011, and the one touchdown win vs the Chargers in 2012 without Sean Payton, that's it. In short, if you show up at the Superdome on Sunday Night Football all you'll win is this: 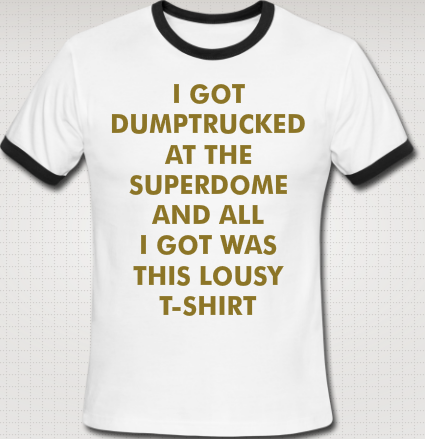 That type of track record will instill a little confidence in your picks no matter who the opponent is, how good their defense is, or how enamored their quarterback is with himself. I wasn't the only one liking the Saints big in this one. Our very own CSC Podcast ringleader, Ralph Malbrough, not only picked the Saints to win, he even got the score right on the nose in his pre-game column:

Also, Carolina has played two winning teams on the road. They got destroyed in Arizona and beat San Francisco 10-9. I’m not sold they can handle adversity, if the Saints jump on them early and I expect to see a lot of sad Cam Newton face. Until the Saints don’t show up big at home in primetime, I’m picking them. Saints 31-13

Well played, Ralph. This past week was the first time I made a score prediction during my weekly picks post, and I was just off by one point myself:

The Saints, in the Superdome, on Sunday Night Football means victory. If there's anything you can believe in, it's that. The Panthers are good, damn good, but good teams get their heads kicked in every once in a while (as we are all too aware). The Saints will be as motivated as we've seen them this season. Don't be fooled by the Seattle game, this team didn't turn into the Texans overnight. The Superdome will once again prove why it provides the best homefield advantage this side of the Puget Sound. Break out the bats, Saints win 31-14.

Of course, for my trouble, the Panther faithful rebutted with:

when you’re average 19 points a game agasint the divison while they’re allowing an average of 8 points from those same teams..

Not saying its a wash either way but 31-14? C’mon… The Saints have struggled in 3 straight games… make it 4

if they want to believe in delusions of grandeur let them. Anyone who’s been paying attention to the Panther’s D knows 31 points allowed isn’t going to happen. The Saints have the home field advantage yes, but not even Vegas is giving them good odds in beating us. That shows a lot.

For as imposing as the Panthers defense is, there's just something about the Saints in that building, in primetime that negates that. You could come in with the '85 Bears defense coupled with the '99 Rams offense, but all you're leaving with is that t-shirt. It's a fact, plain and simple. Of course, in Charlotte, two weeks from now, the Saints will have to fight for every yard and every point in the rematch, and that game will be the one many anticipated this one to be.

The last two weeks have reaffirmed two irrefutable truths about the Saints. First, they simply struggle against top-tier competition on the road in a hostile environment, if you add inclement weather, the odds decrease significantly. Second, when the Saints are at home, they play at such a high level that it throws off the curve for the team nationally. This is why playoff games being played in the Superdome instead of on the road is so vital for the Saints.

Should Seattle falter in the Divisional round, as I mentioned in my previous post, the Saints could find themselves hosting the NFC Championship in the Superdome, and guess what, in this postseason's rotation, the NFC Championship Game will be the primetime game. Fantastic.

My player of the game vs Carolina goes to Marques Colston. This guy gets buried and told he's done, and he's too old, but he keeps going out there like the consummate professional he is, and he silences the critics. I can't possibly express how proud I am to have him represent my team. May he keep silencing the doubters.

I leave you with my absolute favorite moment of the Panthers/Saints game this week. This had me standing up and applauding. I hope we see more of this two weeks from now.