Two weeks ago, the New Orleans Saints defeated the Carolina Panthers 31-13 in the Superdome. They did so largely because they were able to keep Drew Brees' jersey clean. With a rematch in Charlotte this Sunday, the tape shows that the Saints have what it takes to beat Carolina again.

This coming Sunday at Bank of America Stadium in Charlotte, the New Orleans Saints will be hoping for an acute case of déjà vu. The Carolina Panthers on the other hand will be happy with a temporary bout of amnesia.

Just two weeks ago, the 9-3 Panthers came into the Mercedes-Benz Superdome full of confidence, having just won eight games in a row. Facing them was a 9-3 New Orleans team reeling from a 34-7 soul-crushing defeat at the hand of the Seahawks in Seattle.

By the time the game ended, the Saints were 10-3, thanks to a 31-13 victory. The then 9-4 Panthers were left wondering how their highly ranked defense had allowed 31 points and four touchdown passes in a single game.

Wait...are we having of case of déjà vu already? On Sunday, the Saints and Panthers meet again. They have the same record once more, Carolina having just beaten the New York Jets at home, while New Orleans was drubbed on the road by the Saint Louis Rams.

The only difference this time (and it's a big one): the game is played in Charlotte, not in New Orleans.

Okay, it's not the only difference. New Orleans comes into this game in a bit of turmoil. The Saints, just days ago, released their longtime kicker and hometown hero Garrett Hartley. Free agent Shayne Graham was signed to replace the struggling Hartley.

Even more importantly, New Orleans opted to bench their floundering starting left tackle Charles Brown in favor of rookie third round pick Terron Armstead. Two weeks ago in the Superdome, Brown did not allow a single sack to Carolina's right defensive end Greg Hardy. However, a very poor performance against Saint Louis last week cost him his starting job.

When considering all the elements I just cited about this upcoming game, New Orleans doesn't seem to stand a chance in Charlotte. If you think that, you might want to think again.

I remember listening to an interview of Tiger Woods during his well-documented post-scandal struggles on the golf course. The interviewer asked him: "Tiger how do you know that you can regain the form you once had?" and Woods replied: "Because I have done it before."

So while everyone is down on the New Orleans Saints (and there certainly are reasons for that), one thing they can always tell themselves ahead of this divisional showdown is: we've done it before.

What exactly did they do against the Panthers two weeks ago and how? Let's look at the tape.

New Orleans had the ball for the second time in the game after going three and out on their first possession. At that point, Carolina had held the ball for most of the quarter and luckily for the Saints, scored only two field goals.

On a crucial third and 9, the Saints lined up with trips left and tight end Jimmy Graham isolated on the right side of the offensive line. The Panthers put seven men in the box, while playing a cover 2 zone defense. 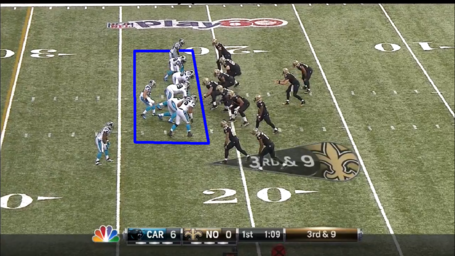 From the Coaches Film view, we can better see the design of the Saints play and the Panthers' defensive alignment. Jimmy Graham runs a seam route (pink arrow), while running back Darren Sproles runs a quick out (yellow arrow). Wide receivers Kenny Stills runs a go route (blue arrow) and Colston on the outside runs a deep out route (red arrow). 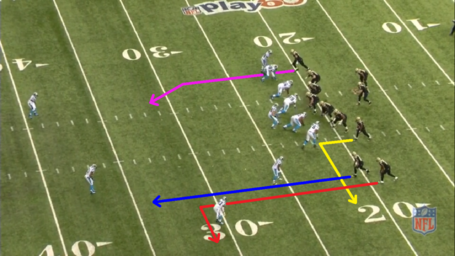 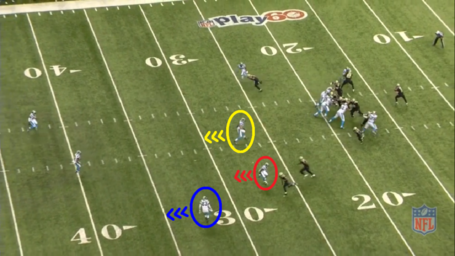 Munnerlyn tangles with Colston who is getting into his break on the deep out (red arrow). Meanwhile, Stills (blue arrow) clears the sideline for Colston as White (blue circle) stays with him. Kuechly (yellow circle) in the meantime, sees Sproles (yellow arrow) open in the flats and moves towards the Saints running back. 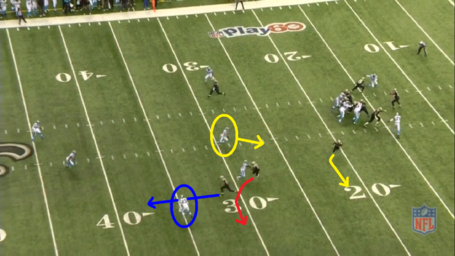 Like Kuechly, Munnerlyn starts towards Sproles in the flats. He probably expected White, in this zone concept, to guard the out/corner route (Colston) and to leave the go route (Stills) to the safeties. Unbelievably, Brees has already diagnosed the defenders mistakes and has released the ball towards a now-open Colston. 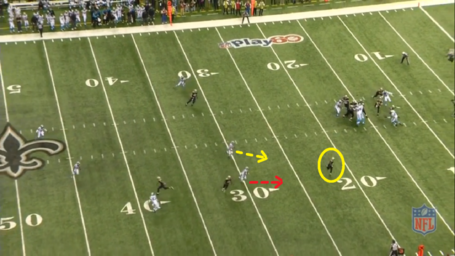 Colston makes a nice catch behind Munnerlyn and Kuechly for 21 yards. 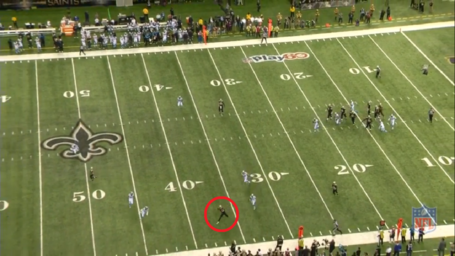 Here's a GIF of the beautiful throw and catch.

This play illustrates the pressure Sean Payton's offense puts on an opposing defense with all the different options available to quarterback Drew Brees.

As is often the case, New Orleans isolates Jimmy Graham on one side of the line (left on this play) to give him one on one opportunities on corner routes in the end zone (pink arrow). Darren Sproles runs a wheel-and-out route (aqua arrow). On the right side, Kenny Stills runs a corner route on the opposite side of the end zone (blue arrow), Lance Moore runs a quick in (yellow arrow) and Marques Colston runs a post route in the end zone (red arrow). 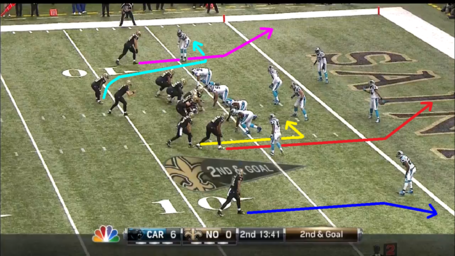 After the snap, Brees starts by scanning the defense to gauge who is going to have the best shot at getting open. For Brees to be able to go through his reads, the offensive line protection is essential. As the frame shows, Brees starts with an outstanding pocket. 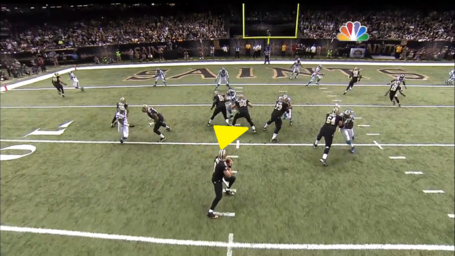 Brees first read is his best potential mismatch in Jimmy Graham (pink circle). With Graham being well defended one on one, he then looks at Sproles (aqua circle). Brees' eyes influence the Panthers defenders on the right side of the goal line, who begin to drift towards Sproles. 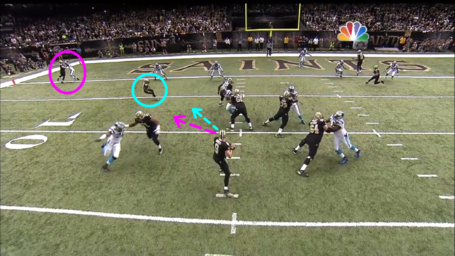 With Graham covered and Sproles about the get double-teamed, Brees goes to his third read, Colston, in the back of the endzone. Moore (yellow arrow) breaks his in-route and goes to the outside, drawing two defenders with him. That gives Brees a sliver of a throwing window to Colston. Note the amazing protection the offensive line gave the Saints quarterback as he went through his progression. 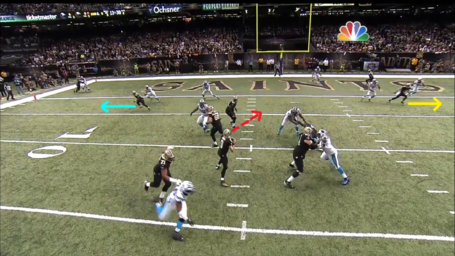 With great accuracy, Brees fits the ball to Colston between two Panthers defenders. Just like that, New Orleans had taken a 7-6 lead and wouldn't look back, extending their lead to 31-6 and eventually winning 31-13. 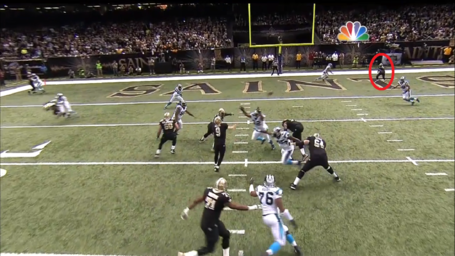 What the Saints did so well two weeks ago was simply a masterful job of protecting Drew Brees.

It is no secret that the Panthers have an outstanding, hellacious defense that will get after any quarterback. However, it is also well-documented that their secondary is a bit shaky. That puts an emphasis on the importance of neutralizing their front seven.

One of the biggest reasons the Seattle Seahawks and St. Louis Rams were able to smother the Saints offense was their ability to play man-to-man on the outside and consistently put some extra pressure on Brees. Against New Orleans two weeks ago, Carolina played a lot of zone defensive concepts to mask the fact that their cornerbacks are not of the caliber of a Richard Sherman (Seahawks) or a Janoris Jenkins (Rams) who are fully capable of repeatedly guarding the Saints best receiving threats one on one.

On Sunday in Charlotte, if New Orleans can keep Brees upright again - and it's going to be a tall order - they'll be the NFC South Champions by the time the final whistle blows at Bank of America Stadium.