Fifty-Five Seconds from the Playoffs

Fifty-five seconds and one more defensive stop were all the Saints needed to make their dream of a playoff berth come true. 32 seconds were all the Panthers needed to take it away from them. Here's how it happened.

Share All sharing options for: Fifty-Five Seconds from the Playoffs

Fifty-five seconds left on the clock. On the soggy field of Bank of America Stadium, that's what stood between the New Orleans Saints and a playoff berth. One more stop of the Carolina Panthers offense and they would also secure the number two seed in the NFC and a first-round bye in the playoffs.

The Saints defense had sacked Panthers quarterback Cam Newton four times on the afternoon. Prior to taking the field with 55 seconds left, they had forced the Panthers into four consecutive three and outs and now with a three points lead, they were out to finish the job.

It is often said in basketball that a free-throw taken in the middle of the 2nd quarter is nothing like a pressure-filled free-throw taken with 5.2 seconds left in the 4th quarter and a one-point lead. The ball, suddenly feels heavier. The knees don't bend as easily. The basket seems to have shrunk. At those moments, even the most accurate of shooters sometimes flinch and miss, opening the door for the opposing team to rally.

That is, in a way, what happened to the Saints defense this past Sunday, with 55 seconds left in the game. After playing near flawlessly all day, New Orleans made mistakes at every level defensively on that fateful drive that would see the Panthers drive 65 yards for a TD...in only 32 seconds.

Let's look at the tape to see how it all unfolded.

Prior to the snap, the Panthers line up with two receivers and one tight end on the left side and a single receiver to the right. Wide receiver Ted Ginn (#19, blue circle) is split wide left and will run a deep crossing route. The Saints show a four down-linemen front and they will play a soft zone coverage, hence the importance of safety Roman Harper (yellow circle in the middle of the field). 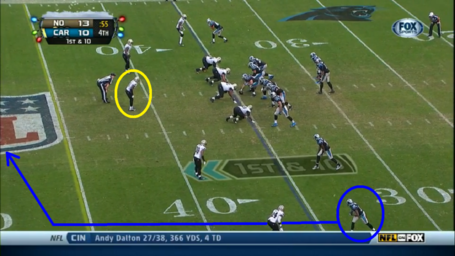 The first mistake by the Saints after the snap is made by the front line. Three of the Saints rushers break their disciplined attack of the offensive line by getting upfield too fast. This leaves a clear lane for Newton to step up in the pocket (blue arrow). 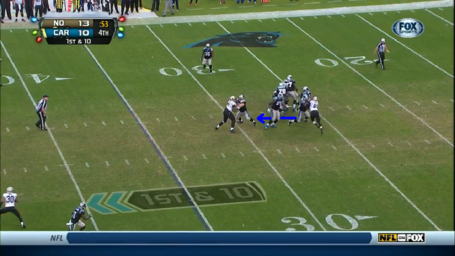 As the Saints pass rushers are trying to get back to him, Newton, who has stepped up in the pocket, has a pretty clear view of where he wants to go with the ball despite the lifted hands of Saints defensive tackle Akiem Hicks. 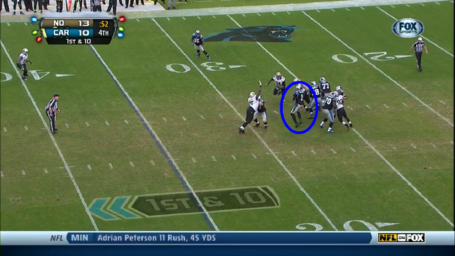 From a different camera angle we can now see the second mistake by the Saints, which is made by the second level of the defense. As Ted Ginn runs his crossing route (blue arrow), cornerback Trevin Wade (#30, dashed red arrow) and safety Roman Harper (#41, dashed yellow arrow) are peeking at Newton (blue circle). That allows Ginn to get behind them. This is an egregious blunder, especially when playing zone coverage in a two-minute drill. 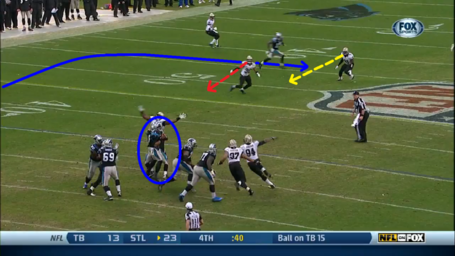 Newton releases his pass with great anticipation. By the time Harper realizes that the ball is going behind him, it is too late to catch up to it. 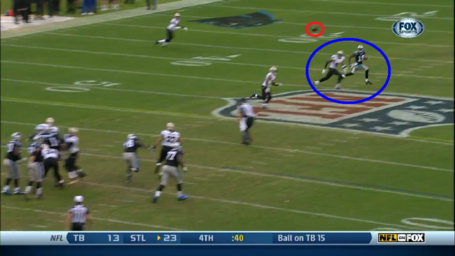 Ginn catches the pass with Harper behind him. Here comes the third and probably most damaging mistake by the Saints on this play. This time the error comes from the third level. Reserve safety Isa Abdul-Quudus (#42, dashed pink arrow) has a chance to tackle Ginn for a gain of only about 25 yards. More importantly, he can tackle him in bounds, which would keep the clock running, increasing the pressure on the trailing Carolina Panthers. 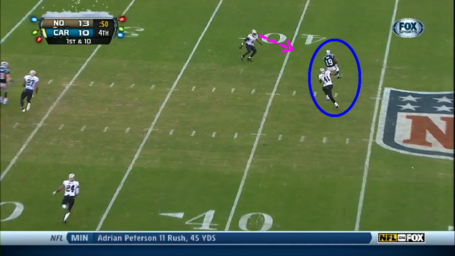 Quudus whiffs on the tackle, which allows Ginn not only to gain an additional 12 yards, but also to get out of bounds and stop the clock with 42 seconds. Carolina gains 37 yards and a virtual timeout: worst-case scenario for the Saints. 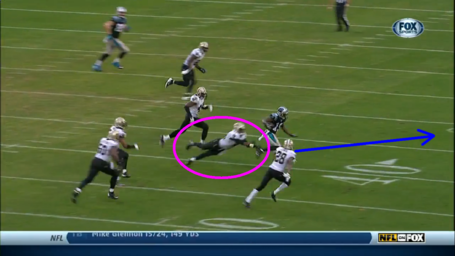 Here's some GIFtation of the play for y'all

If you are a Saints fan or even a casual pro football observer, then it is no secret to you that Saints safety Roman Harper, a fierce and fearless run defender, struggles mightily in pass coverage. If we know it, so do the Carolina Panthers.

On this next play, the Panthers exploited Harper's lack of coverage skills, although to be fair, sometimes the perfect throw can beat even a close-to-perfect coverage.

Following an incomplete pass on first down, Carolina lines Olsen in the slot (blue circle). Harper (yellow circle) is just behind the front line as the Saints send a four-man rush. 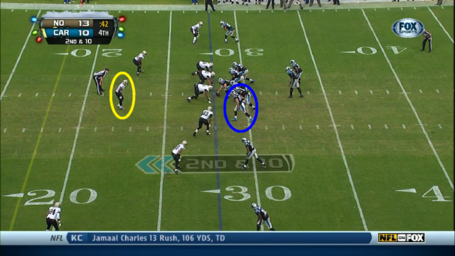 Newton, after the snap, immediately looks at his most favorable matchup: Olsen vs. Harper (blue circle). Carolina's offensive line, once again keeps the Saints four-man rush at bay. 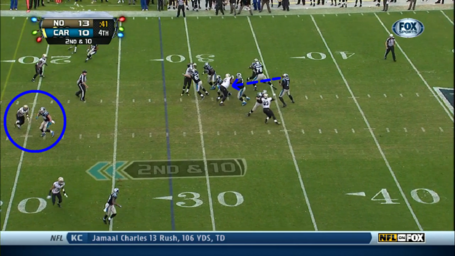 Olsen runs a beautiful route (blue arrow). He runs up to Harper, fakes an out route, then curls in, around the Saints safety (yellow circle). 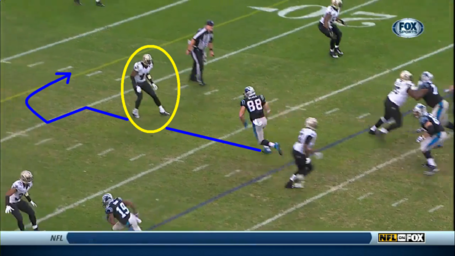 The beauty of this play deserves a nice little dissection. Olsen fake out-route draws Harper in. 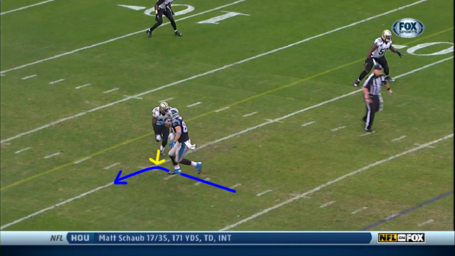 Olsen's sudden turn towards the middle of the field takes Harper by surprise and he resorts to trying to hold the Panthers tight end to slow him down. 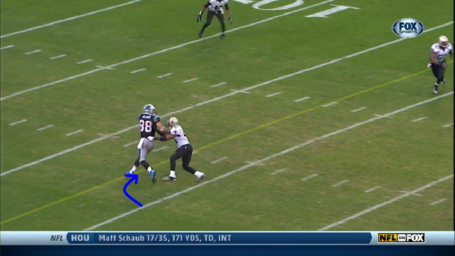 As Saints safety Malcolm Jenkins comes to help with the tackle, Newton unleashes a perfectly-timed pass over Harper's shoulder. Olsen makes the catch just before getting taken to the ground. The pass is good for 14 yards and a first down. 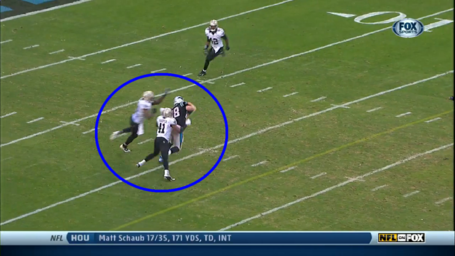 Probably weary of seeing his defensive line unable to get to Newton with only four rushers, Rob Ryan decides to bring extra pressure Malcolm Jenkins (pink circle) in a disguised safety blitz. This leaves Saints cornerback Corey White (gold circle) in one on one coverage of Panthers receiver Domenik Hixon (blue circle) with no help. 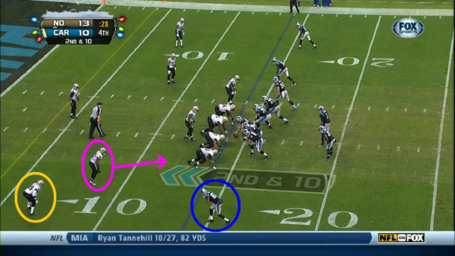 As Jenkins blitzes, Panthers running back Mike Tolbert (#35, aqua circle) who almost moved up to block in the middle of the pocket, realizes the danger and shifts to his left to protect his quarterback. 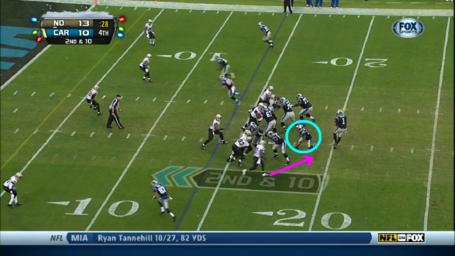 Tolbert gets just enough of Jenkins to keep him from hitting Newton at full speed. 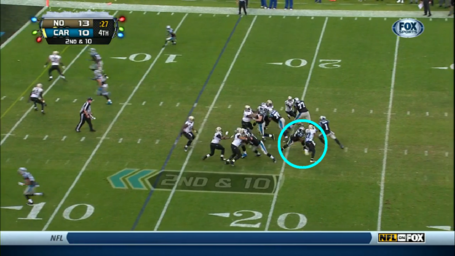 From the opposite field camera angle, we can see what happens next. As Jenkins misses Newton, Corey White, who has allowed Hixon a free release, compounds his mistake by constantly peeking in the backfield (dashed gold arrow) instead on focusing on his man. The Panthers receiver runs a corner route towards the endzone (blue arrow). 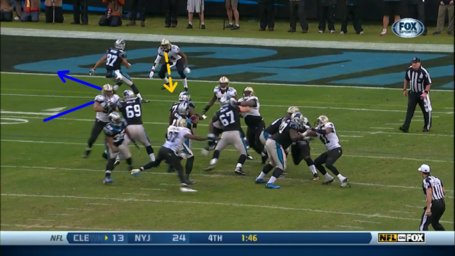 White's poor technique here is appalling. Even has Hixon gets into his break, White nonchalantly tries to reach him with one hand, while still looking at the quarterback. Had he focused on running full speed at Hixon, he might have had a chance to catch up to him and force an incomplete pass. 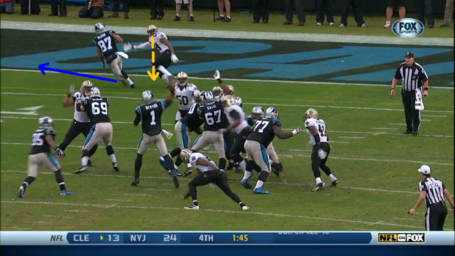 Hixon, wide open, catches the winning touchdown pass. 32 seconds is all it took. 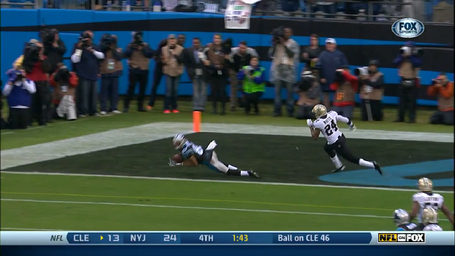 What would the world be without GIFtery?

We all remember the Patriots game, where Tom Brady drove the Patriots in the last seconds to defeat the then-unbeaten Saints 30-27. Another instance was the first game of the season against Atlanta, in which New Orleans was bailed out by a drop at the goal line by Steven Jackson after the Falcons had driven the length of the field and were threatening to score. The Saints ultimately won that game on an interception by none other than the oft-embattled Roman Harper.

And then came this game, with maybe the biggest two-minute drill of the season so far. Once again, New Orleans couldn't protect a late lead and allowed a team to score with little time and no timeouts.

The good news if you are a Saints fan is that New Orleans still has a shot at a playoff berth and miraculously, they still have an outside shot at the number two seed in the NFC and a first-round bye in the playoffs.

Starting this Sunday against the Tampa Bay Buccaneers in the season-finale in the Mercedes-Benz superdome, Saints fan will certainly hope that the game doesn't have to be won on the last possession with the Saints defense on the field.

(Big thanks to Maestro Clay Wendler for the GIFs)