The New Orleans Saints defense has generally struggled against running quarterbacks and guess who's coming to dinner this Sunday night: the Carolina Panthers and dual-threat extraordinaire Cam Newton. Breaking down the film shows the Panthers may go with the read option.

If you thought the last Monday Night Football game between the New Orleans Saints and the Seattle Seahawks was the biggest matchup of the 2013 NFL season, let me use some proper vernacular: you ain't seen nuttin' yet.

On Sunday night, the Carolina Panthers (9-3) come rolling into the Big Easy with their big bad defense, their big bad running backs and their small-yet-big bad man of a number one receiver.

They're coming to challenge the New Orleans Saints (9-3) for supremacy in the NFC South division and for the inside track to the number two seed in the NFC behind the Seahawks (11-1).

The biggest and baddest thing that the Panthers are bringing to the Superdome however is a 7'10" 370 lbs. quarterback: an alien who goes by the name of Caminux Newtonium.

I'm obviously being facetious, but in case you're a very serious reader I'll get back to some cold hard, very serious facts: Carolina's quarterback has been playing at a high level this season and the numbers don't lie. Newton has a total of 25 touchdowns this season, 19 passing and 6 rushing. He is currently completing 62% of his passes and is the Panthers second-leading rusher so far this season with 447 yards on 82 attempts; an outstanding 5.5 yards per rush average.

To help you put Newton's rushing numbers in perspective, the Saints leading rusher, Pierre Thomas, has just 39 more yards on the season (486), although he has 39 more attempts (121).

Newton's rushing ability might be the aspect of the Panthers' offense that the Saints defense will have to focus on the most if they want to beat Carolina in the Superdome on Sunday. If the last game against the Seahawks is any indication, New Orleans should pay extra attention to the "read option."

New Orleans will attempt to make Carolina as one-dimensional as possible by slowing down its dynamic trio of running backs: Deangelo Williams, Mike Tolbert and Jonathan Stewart. What the Saints' defense cannot afford to do is forget to account for the elusiveness of Newton in the pocket.

Last week in Seattle, the Saints did a good job limiting Seahawks running back Marshawn Lynch between the tackles. He only had 40 yards rushing on 11 attempts (3.6 yards average). However, Seattle was able to exploit the Saints tendencies to stack the box inside, by either bouncing their runs to the outside or by using read option plays with mobile quarterback Russell Wilson.

The film breakdown of the next two plays shows how the Saints fared against the Seahawks running the option with Wilson and Lynch.

With a first down and 10 at the Saints 45-yard line, the Seahawks line up with 2 receivers to the left, a single receiver to the right and a single back set with running back Marshawn Lynch (blue arrow) at the right of quarterback Russell Wilson (red arrow). The Saints show a four-down linemen front with two linebackers and a safety in the box to stop the run. 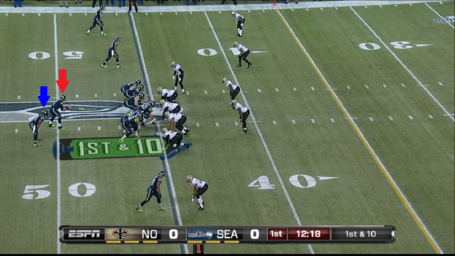 From the Coaches Film view, the key players on the defensive side pre-snap are edge rusher Junior Galette (#93, yellow circle) and linebacker David Hawthorne (#57, yellow circle). 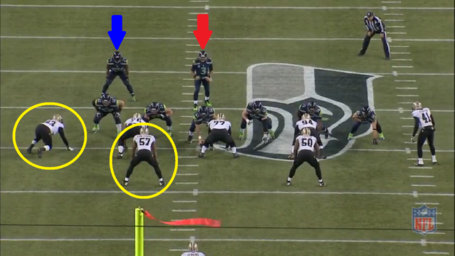 As Wilson (red arrow) seemingly goes to hand off the ball to Lynch (blue arrow), Galette (dashed yellow arrow), geared up to stop the run, rushes hard towards the running back. Linebacker Hawthorne (yellow circle) is waiting to see whether the ball will be handed off or not. 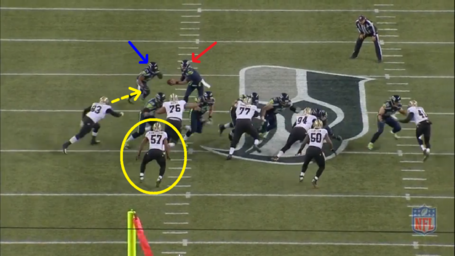 Wilson (dashed red arrow) correctly reads Galette (yellow arrow) who is crashing inside towards the running back all the way. He keeps the ball and eyes a run to the outside. Hawthorne (yellow circle), whose responsibility should be to stay with the quarterback, takes a step to the right, before realizing that Wilson kept the ball. That hesitation is a costly mistake against a fast quarterback. 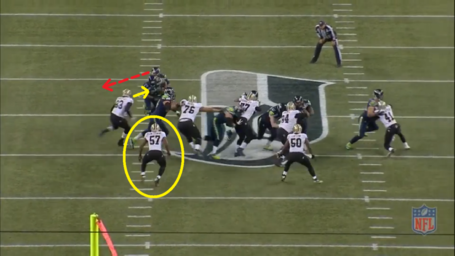 By the time Hawthorne and Galette turn their hips to the left, Wilson is already escaping to the outside. He gains a relatively easy 10 yards and a first down on the play. 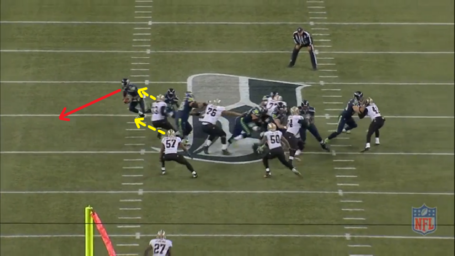 Here's a GIF of this perfectly-run read option play.

This time, the Seahawks have running back Marshawn Lynch (blue arrow) lined-up at the left of quarterback Russell Wilson (red arrow). The Saints once again have seven men in the box, with safety Roman Harper (pink arrow) creeping up close to the line of scrimmage to stop the run. 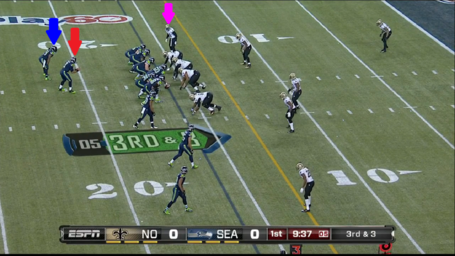 Once again, the Seahawks who have clearly done their homework, are about to exploit the over-aggressive inside rush of Saints defensive end Junior Galette (#93, yellow circle) and the lack of speed from linebacker David Hawthorne (#57, yellow circle). 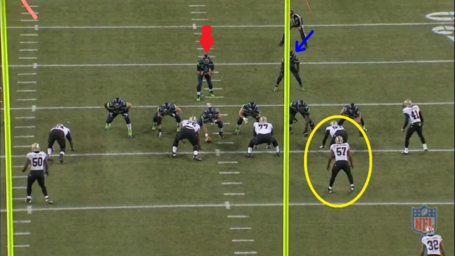 For the second time on this drive, Wilson (red arrow) executes the read option play to perfection. As he pretends to hand the ball off, Galette (yellow arrow) explodes towards Lynch (blue arrow). Hawthorne (yellow circle) once again has his feet stuck on the ground as he tries to diagnose the play. 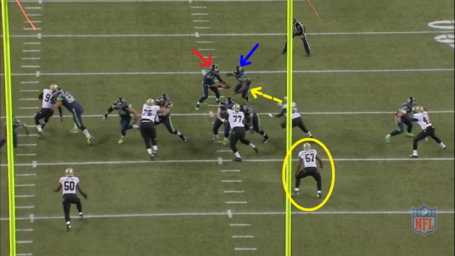 As Galette gets faked out of his cleats, Wilson heads towards the corner. Hawthorne again is caught going the wrong way, but this time he shows a slightly quicker reaction. 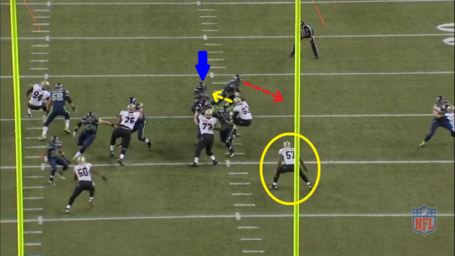 Hawthorne runs Wilson down as Galette (yellow circle) is grabbing a handful of air. The play yields only three yards for the Seahawks this time, but still gets them a first down. 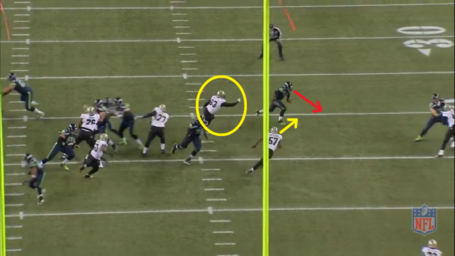 Because GIFs are beautiful, here you go.

Needless to say that the Carolina Panthers probably watched extensive film of the matchups the Seattle Seahawks were able to exploit offensively against the Saints last Monday night. An obvious one was the read option.

With Cam Newton's athleticism and ability to run, it wouldn't be surprising to see Carolina try a few read option plays early, to see whether the Saints learned from the numerous mistakes they made at Century Link Field. On Sunday night, we should quickly know whether they have or not.