At least not according to Merril Hoge anyway.

The interwebz has been buzzing since ESPN's Merril Hoge said yesterday that Joe Flacco is now the NFL's best quarterback.

Honestly, if we're talking about right now, I think you could make a legitimate argument. He did just win the Super Bowl, for Christ's sake, and throw 11 TDs with 0 INTs while doing it. We've got to give him a little credit. Flacco might not have the strongest arm, or be the most accurate, or present a mobile threat. But he's a winner, plain and simple.

Anyway, we're getting off topic. Because my beef with Hoge isn't that he's wacko for Flacco, it's that he doesn't think Brees is the bees knees.

That's right. Check out the video. Hoge's other top five quarterbacks behind Flacco are Aaron Rodgers, Tom Brady, Ben Roethlisberger (are you crapping me!?!?), and Matt Ryan. Drew doesn't make the cut but don't worry, Roethlisberger's there.

But wait...there's more! Check out Merril's Reality Board. Brees isn't even listed in the pool of potential top quarterbacks! He's not even an option! 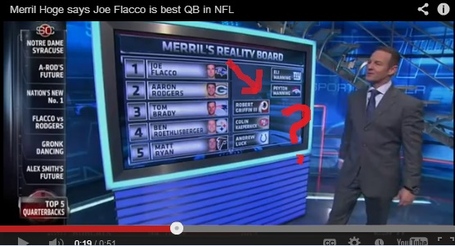 The Mannings are there with three young quarterbacks Colin Kaepernick, Andrew Luck and RGIII. But Drew is nowhere to be found. Considering this, I think it's safe to assume that Hoge doesn't consider Drew Brees to be a top ten quarterback. Well if that isn't a slap in the face.

Am I missing something here? Is the best of Brees behind him and I'm simply too much of a Drew lover to even see the harsh reality?

Nah. I'm pretty sure Hoge is just being idiotic.