Continuing the off-season gold mine of CSC content from my parents, here's the scoop on my Dad getting Rickey Jackson's autograph during Super Bowl Week.

Share All sharing options for: My Dad Met Rickey Jackson!

On Thursday of Super Bowl week, Rickey Jackson appeared at the Academy Sports store in Covington, Louisiana, as part of a so-called "Party for the People" promotion, and my Mom and Dad braved the crowd and went out there to meet him.

This "Party for the People" was a week-long deal that saw HOFers Rickey and Deion Sanders, Saints running back Mark Ingram and tight end Jimmy Graham, and former Chargers/Jets running back LaDainian Tomlinson signing autographs at various Academy stores in the metro New Orleans area. CITATION

Man, am I glad Covington got Rickey instead of either LT or Neon. Guh. The story turns out much better this way.

Here's my Dad waiting in line to meet Rickey. They said that the line looked pretty long at the outset, but even though they were the 55th and 56th people in queue (out of a total of maybe 200 people), things moved very quickly and it was all well managed. 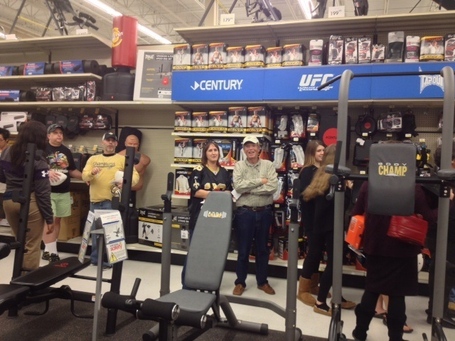 And here's the Moment of Truth - meeting Rickey... 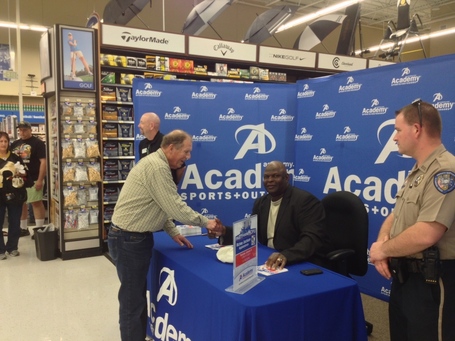 Both my Mom and Dad commented on how nice and gentle Rickey was for their encounter and with everyone he met - he was only supposed to sign one thing per person, but he graciously and without question signed my Dad's cap and the "Party for the People" promo card they gave them at the show, and that he pretty much signed whatever anyone put in front of him. They noted that his niceness seemed such a sharp contrast with the immense size of his gargantuan actual self, and the thought of how he made his living terrorizing opposing offenses.

Look closely, and you'll see how Rickey's hand absolutely swallows my Dad's. Also, those skinny guys flanking Rickey were there to protect him, and my Mom laughed at this because Rickey was bigger than both of them put together!!

Of course, as he does with every Saints figure he meets, my Dad told Rickey that his son writes for Canal Street Chronicles, and asked if he ever read it. Rickey mumbled a mostly unintelligible answer that my Dad thinks could have been, "might have to check that out", but I think it was probably actually something about "my hometown". My folks have talked some trash about going into New Orleans for a burger at The Company Burger and then swinging by Campus Connection to see Dave's store and meet him...I wonder if they'll tell him that I write for CSC, and does he ever read it. HA! 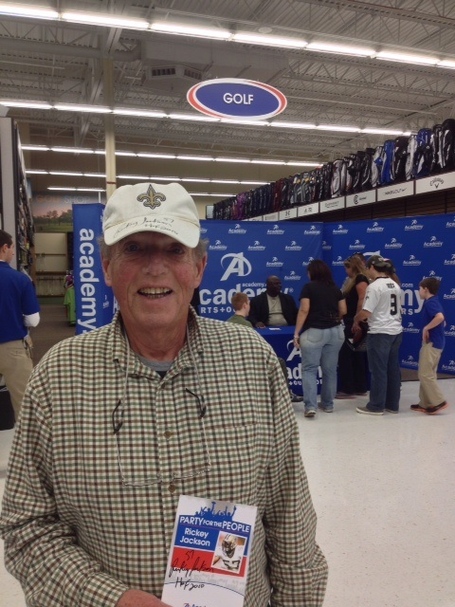 There's my Dad, proudly showing off his signed stuff, and below is a close-up of them, taken after they got back home. 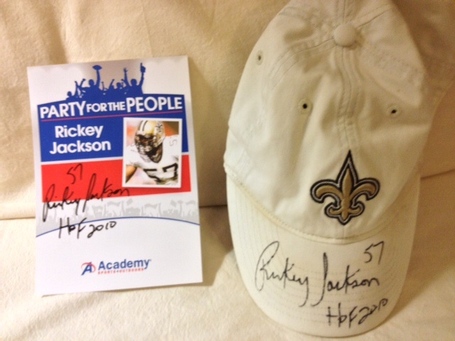 So, yet another brush with Saints stardom for my folks. What a sweet life they have!

Did any of you New Orleans-area CSCers trek out to the other autograph sessions that week? And if so, how did those go?