A comprehensive highlight reel of blogging greatness and community togetherness from the past five years here at Canal Street Chronicles.

Share All sharing options for: Celebrating Five Years of CSC: Memories and Milestones

I'll spare you the long, sappy introduction where I wax nostalgic and get all emotional about five years of Saints blogging. We've done that plenty already this week and you'll get even more of that below.

Instead, I'm just going to jump right into this relatively comprehensive collection of CSC highlights (and lowlights), personal favorites, and community firsts that I've put together. I think you will all really enjoy it.

So thanks for reading. Without you, none of this would be possible.

It's always nice to get some recognition from others in your field, which is why I couldn't have been more proud when Mike Florio called my Sean Payton hologram satire post "brilliant." Other than the Saints winning the Super Bowl, this might be my all-time favorite CSC moment. Here's the money shot from Florio:

Over the weekend, the folks at Canal Street Chronicles posted a brilliant item suggesting that the Saints would use Coachella-style Tupac technology to simulate the presence of coach Sean Payton on the sidelines during 2012 games.

It was obviously a joke, but Dave Cariello nailed the underlying sentiment.

I had some anger issues following the Saints Super Bowl victory, directed toward the media "haters" slurpin' on dat Haterade before the game ever started. After being coaxed by the ESPN.com front page, I unleashed a bit of a my own hate right back an them in a post titled Hell Hath No Fury Like a Who Dat's Scorned. To this date it's still one of my most memorable.

I've met quite a few people through this blog, ya know, like in the real world. One of the most incredible was NFL superfan Adam Goldstein. Long time readers will remember Adam from the 2008 NFL season, when he successfully completed his mission to attend 40 NFL games in a single season, at least one at every stadium in the league. I befriended Adam before embarking on his trip, interviewing him and helping spread the word to other NFL fans across the country about his journey.

But the best part was that we wound up trading game tickets, he taking me to the Saints vs. Chargers game at Wembley Stadium and me inviting him to see the Saints face the Packers in the Dome. I enjoyed showing him the way we do things at a Saints game here in New Orleans. And that quick jaunt over the Atlantic just to see the Saints play in London will forever be a serious notch in the old Who Dat Belt of Fanhood for me.

But wait, there's more! Since I was a small part of Adam's incredible journey, I got myself a couple of mentions in his published book, which chronicles his entire record-breaking adventure. By the way, Adam now has a beer named after him with his face on the can. I don't care who you are, that's pretty cool. 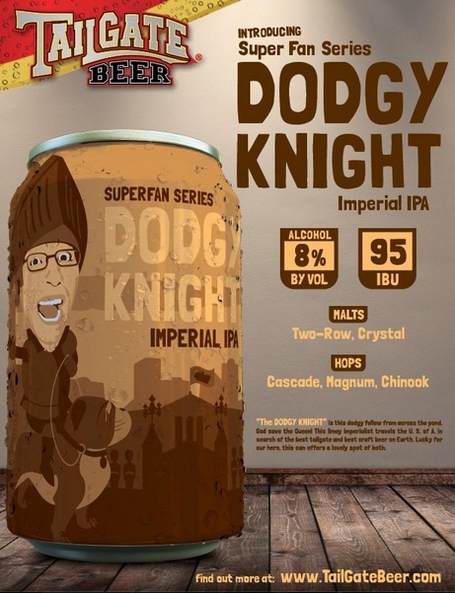 Though it wasn't incredibly well received, I think one of the better posts I've ever written here on CSC was on March 24, 2009 when I compared the upcoming 2009 Saints season to the season premier of HBO's Big Love. It was titled Big Love, The New Orleans Saints, and the Next Season of Both. I'm still impressed that I was able to carry the juxtaposition through so many different plot lines.

Dave Choate was absolutely brilliant when I asked him to help play an April Fool's joke on you guys and pretend that he would be taking over the blog. Would you expect anything less from The Falconer?

Can you guess the most-trafficked post of all time on Canal Street Chronicles?

Because it's not one you'd ever imagine in a million years. Over the past five years the single most heavily trafficked page on CSC - other than the main FanPost and FanShot pages - is this one from February, 20th 2009 inviting readers to take a sample Wonderlic test. And it's not even close. How is this possible? Apparently there are a lot of people out there interested in the Wonderlic test and our post hits all the right Google keywords.

So what's the most-trafficked Saints-related post in Canal Street Chronicles history? You'll have to travel back to July 13th, 2012, the day that Drew Brees and the Saints finally agreed on a new $100 million contract. After the announcement was made and all of Who Dat Nation breathed a collective sigh of relief, I hit them with my infamous satire and claimed Brees was being suspended by Roger Goodell for his Bountygate involvement. Needless to say, it wasn't true but it certainly got everyone's attention. Timing is everything in the comedy game. And the way things had been going that off-season, it was almost believable

The record for the most traffic in a single day at Canal Street Chronicles shouldn't be nearly such a surprise. If you guessed Wednesday March 21st, 2012, or B-Day, then you'd be correct. When the bountygate scandal broke that day, it was good for a record 59,854 page views. Personally, I'd rather forget about it.

Lock Up Your Cats

If there was one story that might be voted worst in CSC history, it would almost assuredly be Sean Payton And His Cat Raping New Punter by the infamous Hap Glaudi's Ghost. Which is an unfortunate title because it's very misleading; most of the article is actually a slam on the local media.

It was Hap's inaugural post on Canal Street Chronicles and he/she came out with guns blazin'. He/she was instantly met with resounding dislike by the community. The harshest criticism that day came from jful:

This guy is worse than Jeff Duncan.

Ouch! It doesn't get much worse than that. But it pushed the boundaries a little too much so I took it down. Now it lives only in the memories of those fortunate enough to have read it and in a small private corner of the internet where only I can access it. And you'll still never know the secret identity behind Hap Glaudi's Ghost.

Probably my favorite part of the whole situation in retrospect is this criticism from MtnExile:

Oh, and one thing I forgot to add

How does it improve our relations with the Saints, or advance our ambition to be able to break news ourselves, if we welcome a new player into New Orleans by saying he looks like he rapes cats? Think CSC will ever get an interview with that guy?

Boom! Interviewed him one year later.

Speaking of interviews, the first real ones I conducted weren't even with Saints players. That first summer I did an entire interview series with local New Orleans musicians like Fred LeBlanc of Cowboy Mouth, and talked Saints with them.

My first player interview, however, was with Usama Young, for which I will be forever grateful. Since then I've had the pleasure of interviewing a long list of players like Kyle Turley, Jonathan Vilma, Thomas Morstead, Malcolm Jenkins, Scott Shanle, Garrett Hartley, Martez Wilson, Johnny Patrick, and Danny Clark.

The most unforgettable interview we've ever had on here, interestingly, was probably the one with Saints reporter Jeff Duncan. In our two-part dialogue he gave some great answers and stirred a lively debate about the Saints and the media.

When Kenny Wilkerson resigned from WWL in 2008 and disappeared mysteriously for a year, it created quite the controversy and raised a lot of questions. But when Kenny was ready to get back in the game, he chose us here at Canal Street Chronicles to re-introduce him to Who Dat Nation. Kenny and I chatted extensively about the Saints, his career and Sean Payton's heavy hand. Now that I think about it, where the hell is Kenny now?

Gone But Not Forgotten

I'd now like to have a moment of silence for those members that we've lost along the way for one reason or another. Cue the music. Maybe one day they'll return 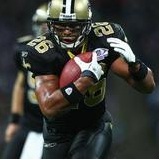 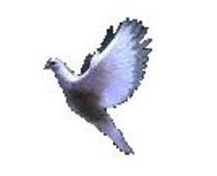 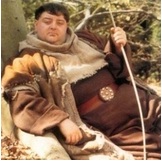 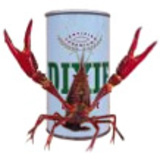 Highlights from the Peanut Gallery

The most popular FanPost of all-time here on Canal Street Chronicles, and deservedly so, was MtnExile's BrettFavrian Rhapsody. Described as "an oratorio in four parts, based on events taking place on the floor of the Superdome on or about the evening of Sunday, 24th January, in the year 2010" it takes the musical genius of Queen to a whole new level. It received 37 recs because it's nothing short of brilliant.

MtnExile was also responsible for another one of Da Chronic's all-time popular FanPosts. His post-Super Bowl slap in the face of Colts GM Bill Polian called You Lost Me Here, Bill earned 30 recs.

Equally incredible were the ten commandments bestowed upon us by Hooahsaint in his How to be a Fan of a Winning Team for Dummies FanPost from November 2009. He wanted to make sure all of us kept our cool while the Saints were still unbeaten.

More recently we were treated to an impressively well-researched piece by Doc Boudin called Bountygate: Nothin' New Under the Sun, detailing the history of violence and injury in the sport of football. Doc's very informative FanPost received 29 recs and sits as one of the most popular of all time.

There's a First Time for Everything

The first appearance of Mrs Frumplesworth was May 23, 2008 in Getting to Know YOU!. 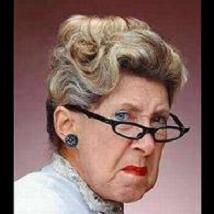 The first prediction contest was held on August 6th, 2008 in Tomorrow...Tomorrow. It has been seriously refined since those early days.

First use of sarcasm font. Amidst the fervor surrounding Jammal Brown's trade to the Redkins, Dan Kelly accidentally stumbled upon a formatting secret and I quickly gave it the sarcasm designation.

First use of Boom! Rec'd It! We all know Stu started this one. You can see that it actually started out as "Boom I rec'd it" but like The Facebook, it would wind up getting shortened to the sexier, more marketable "Boom! Rec'd it!" 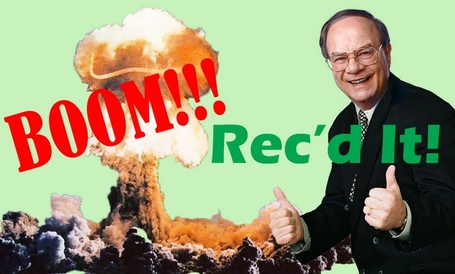