Break out the marker and start circling these dates.

The NFL schedule was released last night and immediately all I can think was, "Wow, the Saints might have the hardest 'last-place' schedule ever." The murderers row of San Francisco, Atlanta and Seattle within a 15-day stretch is the cherry on top of this crap of a schedule that New Orleans has been handed.

On a brighter note, the Saints do have four primetime games in 2013, half at home against the Miami Dolphins and Dallas Cowboys and the other half tucked into that suck-fest of a three game romp at Seattle and at Atlanta. 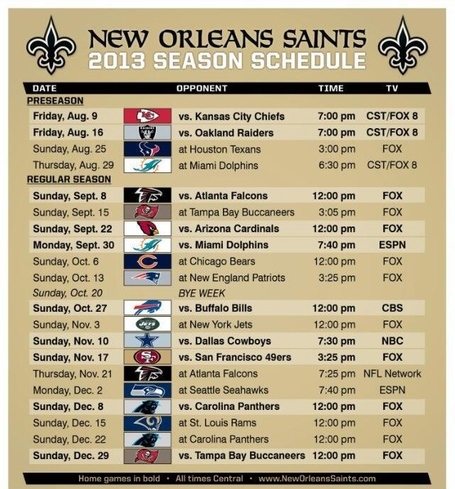 One other good thing about the schedule is that it starts and ends at home. You can't really ask for more than that under Roger Goodell's benevolent leadership.

You've all seen it by now, in all of it's glory. But which games are going to be the best on the Black & Gold's schedule? Is it going to be the matchup against Sean Payton's protege, Doug Marrone, when they play Buffalo? Will any divisional games make the cut? Here are the top five Saints games of 2013, in chronological order.

The second game between these two teams might just decide the division, but the first one, the season opener, now that one is going to be big. Both fan bases will start both of their season countdowns with their eyes squarely on their arch rival.

What a way to start a season, right?

The last time the Saints opened at home against the Falcons, Steve Gleason was putting his stamp on Who Dat Nation and hasn't stopped since. It's just 247 days away until Who Dat Nation can put that first mark in Atlanta's loss column.

Getting Payton v. Belichick is always an intriguing matchup. It rarely happens, but when it does, it's good. The Patriots were a second-half collapse away from playing in another Super Bowl, and they didn't lose much this off-season outside of Wes Welker.

These two coaches are basically mirror images of each other, just one is on the offensive side and the other's expertise is on defense. The last time these two met in the regular season? The Saints were routing the Pats en route to a Super Bowl championship. It should be an interesting game, and I know Mr. Goodell will be watching his two favorite controversies, er, teams.

Rob Ryan's addition to the Black & Gold makes this game relevant to Saints fans. Without him, this is just another speed bump against a loud, brash coach on the way to another division title.

This game gains more significance if the Chris Ivory trade goes through. Mr. Ivory is a huge fan favorite and could overshadow the Brothers Ryan in this one.

The Saints need to break through versus Jim Harbaugh's team, losing the only two played against him. The last one being Colin Kaepernick's first start which began his trek to an NFC title. That won't happen this year. I have a feeling Kaepernick comes back to Earth, and ol' Jimmy really starts to miss his safety blanket in Alex Smith.

New Orleans hasn't beaten San Fran since Reggie Bush snapped his leg on Monday Night Football in 2010. That needs to change if the Saints want to get back to contending again.

Outside of the Falcons opener, this is the one that has me the most excited. The Seattle Seahawks are the "sexy" team right now, and everyone is jumping on the bandwagon. But all I remember when I see Qwest Field is Marshawn Lynch running through Triple Snitch's defense and leaving the defending Super Bowl champs stunned. That defeat came against a 7-9 Seattle team.

This Seattle team is going to be just a wee bit better. Whoever runs the ball more efficiently in this one is going to have a big leg up on home-field advantage in the playoffs. At least I hope so.