The Pride of New Orleans: The 2005 Saints

Despite many years of suffering, the Saints have provided Who Dat Nation with some memorable teams to be very proud of. Which Saints team are you most proud of?

Share All sharing options for: The Pride of New Orleans: The 2005 Saints

There was the 1987 Saints who went 12-3 and finally made the playoffs.

There was the 1991 Saints who finally won the NFC West.

There was the 2000 Saints who finally won a playoff game.

Of course, there was the 2006 Saints who made the NFC title game and helped bring the city together.

Without question, there was the 2009 Saints who brought home that elusive Super Bowl title we all cherish to this day.

All of these teams have brought us an immense sense of pride over the years, but there is one team that made me not only proud of the Saints but, as always, proud of my hometown of New Orleans. A team that has been overlooked in the aftermath of the greatness that has followed it. A team that faced an unimaginable adversity that, if we are all lucky, no franchise in sports will ever have to face again.

I personally carry a great sense of pride in the nomadic 2005 New Orleans Saints.

Sure they were awful. They were downright terrible. In fact, some would've gladly traded in their paper bags for plastic ones watching that Saints team on the field that season. Yeah they were bad, but no matter where they played, they were ours, and we needed them. That season, the Saints went 3-13 and played in 3 different "home" venues. They were a franchise that had become stale and complacent in its current iteration at that point and desperately needed some drastic changes, and changes would be on the horizon.

Sean Payton and Drew Brees helped rebuild the Saints and led them to glory, but it was Jim Haslett and Aaron Brooks who were there at the end, in the darkest days the organization and the city it represented had ever seen. For as much as Haslett and Brooks are mocked, in their final season of 2005, they were subjected to the most tumultuous situation any franchise had ever endured.

The post-Katrina Saints of 2006 had some overwhelming obstacles to overcome of course, and they deserve every bit of credit they've received, and more. Let's not forget though, the uncertainty and instability that surrounded the Saints and New Orleans itself during that 2005 season. The 2006 Saints represented the rebirth and revitalization of New Orleans, whereas the 2005 Saints represented resiliency and resolve in the face of uncertainty. They weren't winners, but they were ours.

In a tragic season riddled with low points, the highest point came at the beginning, much like the tenure of Haslett and Brooks itself. The greatest moment of pride that season came in Week 1 at Carolina. The Panthers were just 2 seasons removed from a Super Bowl appearance and on their way to an NFC Championship Game appearance that very season. Carolina was a 6.5 point favorite over the vagabond Saints at home in the Week 1 matchup.

The Saints were overmatched but not overwhelmed. With the score tied at 20 with 7 seconds left in regulation ,John Carney hit a 47 yard field goal to give the Saints the 23-20 lead. A Carolina fumble on the ensuing kickoff secured victory for the Saints, and my pride for the Saints and New Orleans soared. 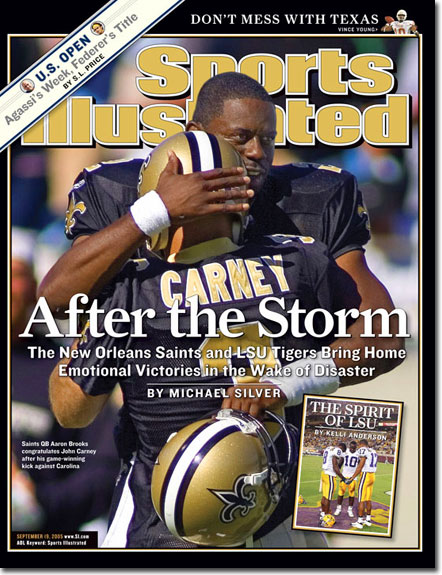 The 2005 Saints only won 3 games but they didn’t shame the city they represented. Their abysmal record was the catalyst for the Reggie Bush draft, the Drew Brees signing, and the Sean Payton hiring. That team “fell on the sword” for the future of the franchise and the NFL in New Orleans. It was, at that time, darkest before the dawn.

Their record was dreadful and both the roster and coaching staff were long overdue for coming changes. For one week though, they were good, and they were good for New Orleans. They won that game with heart and determination, they won that game for New Orleans. For at least one week, despite despair, there was hope, faith, and most importantly, pride.

So I ask you Who Dat Nation, which Saints teams have given you the most sense of pride over the years? Leave us your comments below. Who Dat!