HansDat brings you coverage of Saints rookie wide receiver Kenny Stills at the NFLPA Rookie Premiere Event in Los Angeles, and gives you exclusive "insider access" to his own personal football card collection. Try not to swoon.

The NFLPA and a number of corporate partners held their annual Rookie Premiere Event in Los Angeles this weekend, in which the rookies signed memorabilia, gave interviews, and participated in rookie trading card photo shoots. Twenty-five of the 32 NFL teams were represented by players from this year's draft class, and Kenny Stills of the Saints made the trip.

SB Nation sent a few guys to cover the event, and Ryan Van Bibber (who covers the Rams for Turf Show Times) tweeted out some words from Stills on Friday, which will add to the Kenny vs. Kenny storyline that CSC is keeping an eye on:

Van Bibber fleshed out the quotes a little bit more in THIS QUICK HIT from SB Nation from Friday afternoon that's also on our front page right now.

"Kenny and I are actually really cool," Stills said Friday at the NFLPA Rookie Premiere. "We're trying to figure out a way for people to differentiate us because we're both light skinned and tattooed and named Kenny."

SB Nation's Dan Rubenstein tweeted out a link to this first ever pic of Stills in his Saints uniform near the autograph table:

Dan also noticed this during one of the earlier rookie events...

...then retweeting Rubenstein's pic of him (look at his cartoon profile pic...)

And fun in the sun at the Rose Bowl...

So, with Stills and Vaccaro getting the rookie trading card treatment so far so far, it made me think of my humble football card collection, and through the wonder of cell phone cameras, my artistic flair, and uploading asset technology on CSC, I bring you this "all access tour" only available to you privileged few...

But first, some context.

I began collecting football cards at the end of high school (1988-89), and used to buy individual packs at retail locations (Wal-Mart, Target, grocery stores), then moved up to actual entire boxes of packs, too. I'd rip open the packages, and quickly sift through the cards to find and set aside all the Saints cards, then the rookie cards, and then build my annual sets for Pro Set, Score, and Upper Deck and store them in cardboard boxes sized for them and put the special cards in individual hard plastic sleeves. I'd make lists of which cards I had, which ones I still needed complete the sets, and I enjoyed this hobby for a few years.

As I got older, I had less disposable income and less time on my hands, so I drifted away from it. But then with the excitement of the Ricky Wiliams draft of 1999, and the fact that I went to a Kentucky Derby party where it was rumored Ricky Williams MIGHT BE THERE, I purchased some of his rookie cards and stashed them and a sharpie in my pocket, hoping to get an autograph or two. Well, he never showed up, but my interest in football card collecting sure did.

Ever since then, I have purchased Saints rookie cards and team sets each year. One year, I went a bit hog wild and Mrs. H bought me a Saints collector set of over 500 random Saints cards, a special binder, and three-hole clear plastic pocketed protective sleeves, which allowed me to get things all organized - yay! (Usually I'm pretty laid back, but from this work and my comic book collection, I see that I do have the capacity to be an OCD nerd sometimes.)

My collection has grown from the one binder to a second, and they sit on my Saints Shelf next to my bed (the spine on the blue one reads "Who Dat? The New Orleans Saints (and St. Louis Rams) Football Card Collection): 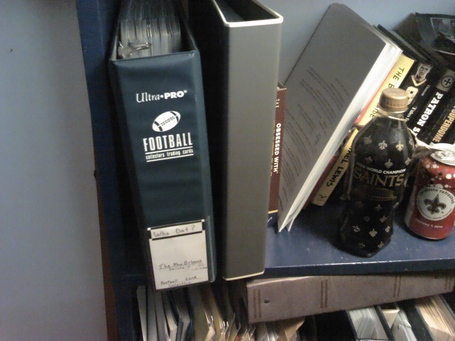 A cool Crackerjack-prize reflective Saints sticker adorns the front of the gray binder, which had to be purchased last year: 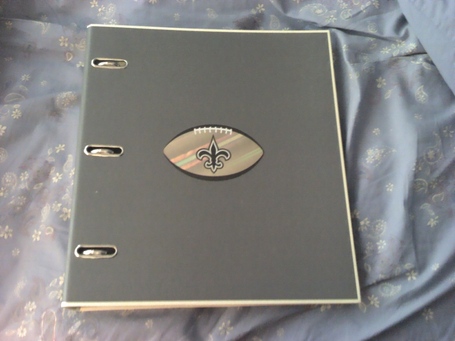 I bought my 2012 Saints team set cards in November, but when the season got ugly at the end, I forgot all about opening them and they sat until I put them in their rightful places on Saturday morning. 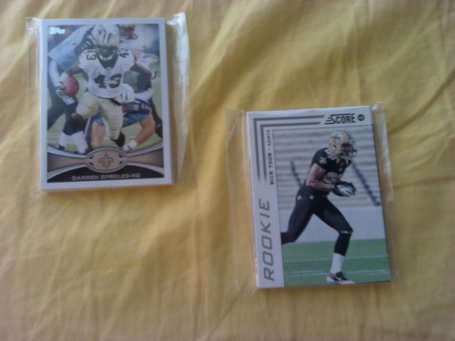 This page shows some of the first Pro Set Saints cards I ever bought (and a couple of oldies but moldies that came in that 500-card Saints set - but note that I do not consider Tony Galbreath "O & M" - that's for Dave Wilson and Russell Erxleben). 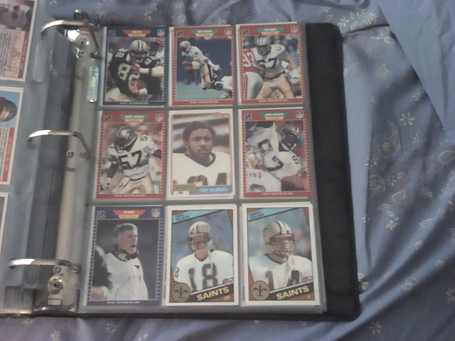 This is a double-page spread of my original binder that shows how I organize the cards by year and position groups. The most recent year is at the front, and from right to left/back to front, I first put rookies, then defense, then offense, then special commemorative cards. 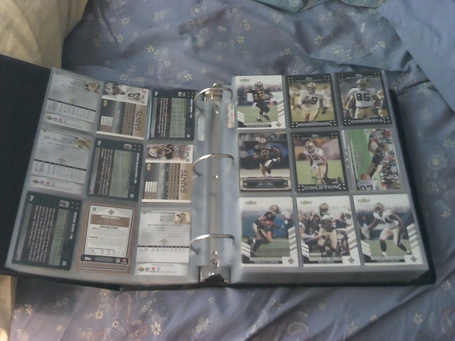 Know who gets a lot of cards made of him each year? Drew Breeeeeeeees!! 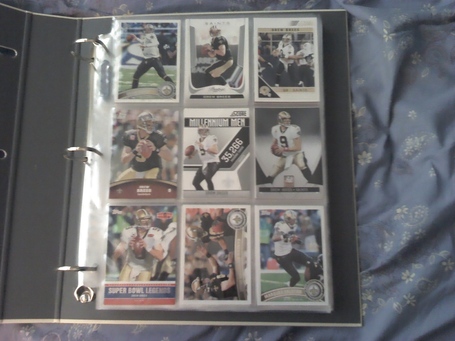 And who can forget these guys? 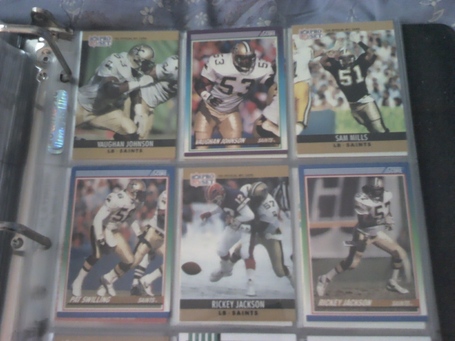 Man, were these guys good. They deserve some kind of monument, mountain, statue, or something to honor their efforts for the Saints. We should all talk about this sometime. And dig that shot of Ricky blasting Jim Kelly in the snow in 1989. "Hey! Where's the ball?"

I know some of you collect these, too, so let's just lay all our cards on the table and talk it up! Did you collect cards as a kid? How about now? Are you a hard core investor-collector, or just a Saints fanboy/girl?

I'm also prepared for the slings and arrows of nerd jokes. One of my nerd powers is that nerd jokes don't even come close to bothering me, EVER, and I take it all in good fun, so feel free to give me your best shots. It will not be received as a personal attack, but please be mindful of the other Community Guidelines as you strive for clever and funny visuals and wordplay.