Finally, the moment we've all been waiting for: Sean Payton is now on Twitter!

The official Saints Twitter account confirmed this morning that @seanpayton is, in fact, the Saints head coach. So go ahead and start following him.

We confirmed with Coach Payton that @payton_sean is his account. It will be verified soon #Saints

Payton signed up for an account this past weekend with the help of his two kids and posted his first tweet on Sunday.

Thanks to my children I'm now in Twitter Universe!! @meghanpayton7 @ctpayton19

He's only tweeted twice since then and it's pretty much what you'd expect. He gives the boilerplate shout out to Saints fans...

Shout out to "Who DAT" Nation! Have a safe memorial day weekend.

Then he wastes no time cleverly sneaking in a word from his sponsor...

On second thought, this is probably not going to be as exciting as we had all hoped. It certainly won't be as good as the time we pretended Payton was already on Twitter in 2009... 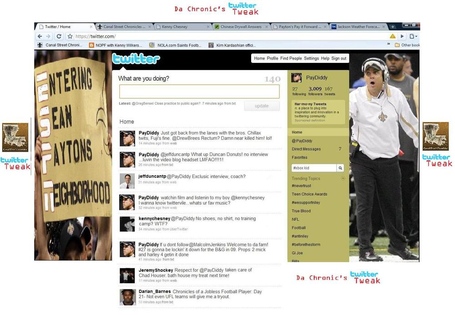