New Orleans Saints Running Game Must Get Back to Basics

Despite being a perennial premier passing attack, to return to it's 'glory days' the New Orleans Saints offense must get back to the basics of running the ball.

Share All sharing options for: New Orleans Saints Running Game Must Get Back to Basics

Let's set the record straight. In my humble opinion, the New Orleans Saints have the very best air-attack in the league.

Teams like the Patriots, Packers and Falcons are very good in their own right, but lack the overall acumen of the Saints. The characteristics that separate the Saints from the field include: longevity, versatility, and the ability to operate in any quadrant on the field.

Their general, quarterback Drew Brees, combines the ability to extend plays, with an innate aptitude to operate from within the pocket. The Saints personnel execs do a great job of finding low round picks (or undrafted free agents) who operate well in space, in addition to being efficient hands catchers.

It's not that the Saints couldn't run the ball, it's that they negated it in favor of the pass

The Saints will be a top five (at least) offensive team for the foreseeable future. That's why is sounds pretty hilarious to state: If the Saints want to procure that Lombardi Trophy, they must run the ball!

In two of the three seasons that the Saints have won the NFC South (in recent history), their teams had quite a few things in common. The pass game was diverse and extraordinary like we've come to expect. The defense was opportunistic in the form of turnovers, taking advantage of the offense's ability to score at a moments notice. And mostly, the run game was just outside the top five, finishing 6th in 2009 and in 2011.

In 2012, despite their 7-9 record, the Saints managed to finish second overall in total offense. And as always, Brees had a phenomenal year statistically. His 43 TDs, 19 INTs, 63% completion percentage and 96.3 QB rating would normally warrant MVP status. But the Saints historically bad defense coupled with untimely errors on offense, pretty much sunk the proverbial boat before it left the dock. The Saints finished dead last against the run, and second to last against the pass. The 26 turnovers forced would have been great, if it weren't for the 24 turnovers produced by the Saints' offense. One of the primary reasons for the inconsistency at crucial parts of the game, was the lack of commitment to the run.

It's not that the Saints couldn't run the ball, it's that they negated it in favor of the pass - until it was too late to gain any type of a rhythm. With head coach Sean Payton being gone (due to a season long suspension), the duo of offensive coordinator Pete Carmichael and Drew Brees dialed up an uncanny 670 attempts through the air (2nd in the league) - as opposed to 370 attempts by land. 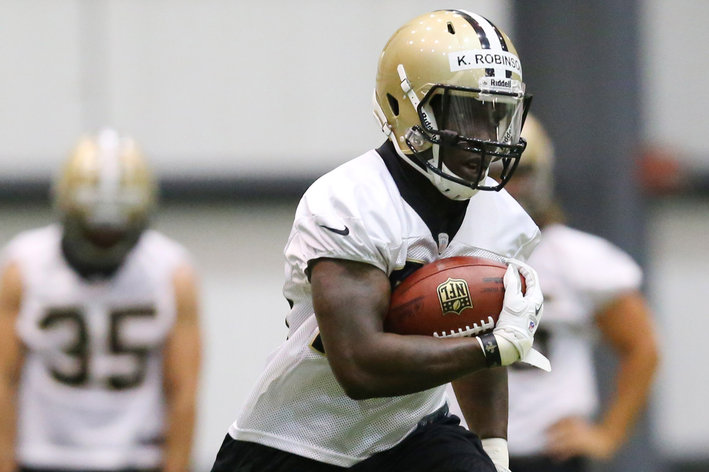 Have the Saints Found Another Undrafted Running Back Talent?

Compare that to 2009's magical Super Bowl year, where the Saints attempted 544 passes and 468 rushes; you can see the glaring discrepancy! And this was truly a schematic blunder, as the Saints averaged 4.3 yards per attempt in 2012, which was good for 13th in the league.

For an explosive team like the Saints, a balanced attack is paramount. The offensive line of finesse teams often get complacent in their blocking scheme - when the pattern is often to move backwards for pass protection. Offensive lines get in rhythms as well, and the more they can go forward to block, the more effective they have a chance to be at the end of games.

How many times did we see the Saints try to stave off comebacks at the end of the game by throwing the ball? The Chiefs game was their season in a microcosm. Instead of pounding the ball with attitude and limiting the opportunities of a comeback by keeping the clock moving, the Saints continued to dial up pass plays. One of which resulted in a sack for a safety! The 2009 Saints would've been so dialed into the run, that the opposition would've been focused on stopping that, rather than rushing the passer.

The Saints always seem to have a pretty good offensive line, due to superior offensive scheme, coupled with exceptional offensive talent. It seems like every year they lose a key player on the line and replace him with someone more than capable.

2013 will be no different, as left tackle Jermon Bushrod departed through free agency. I honestly don't think of this as a big deal, as New Orleans' line is usually built from the interior out. Usually teams who have great success defensively against Brees do so by pressuring him with great interior line play. He has such great peripheral vision, that he's usually able to escape edge pressure in myriad ways.

For an explosive team like the Saints, a balanced attack is paramount

The guard combination of Ben Grubbs and Jahri Evans do a superb job of keeping pressure out of Brees' face, while setting the tone in the run game. Center Brian De La Puente is underrated in my book. Tackles Zach Strief and Jason Smith all have plenty of experience, and should be very capable in the Sean Payton system. Rookie tackle Terron Armstead has all the physical tools to make an impact once he's coached up as well. The more this crew runs the ball, the nastier the disposition becomes - which assists a talented group of runners.

One of the most underrated players in the entire league resides in the Saints backfield. Pierre Thomas could easily be a 1,200 yard rusher if given the appropriate amount of carries. He's an excellent blend of vision and physicality. He sets up blocks well, and is the absolute best in the league in the screen game. I, for the life of me, can't get why he never gets to shoulder the load. He's an explosive play just waiting to happen.

Do-it-all dynamo Darren Sproles provides versatility in the form of the pass game as well as special teams. With the departure of wrecking ball Chris Ivory (who might've been the best of the whole bunch), most expect third year back Mark Ingram to step up to the plate. I have a feeling he just might.

After back-to-back seasons at 3.9 yards per attempt, Ingram has yet to recapture the magic that made him a dominant force in college. Gone are the days where Ingram would put his team on his back with an intensity and slashing style all his own. Being in a crowded backfield doesn't help, although it's not a total excuse.

The thing that made Ingram special at Alabama was his 4th quarter prowess. He would often get over 20 carries per game and would be at his best at the most crucial junctions of the game. In New Orleans he's lucky to get 12 carries.

As a matter of fact, in 26 games he's only hit the 20 carry mark once. His career average is 10.6 carries per game. Not nearly enough with his type of running style. In an effort to get some continuity, I'd like to see Ingram be the main guy, and see what it does for the running game and subsequent play-action game. Because when it's on....it's on!

Saints run game out of a pass formation...

Here we have a "Stack" set that New Orleans runs to perfection in the pass game. It's a variant of the 'West Coast" part of their offense.

The receiver Meachem goes in motion to get the defense to show it's hand, while providing further assurances that this could be a pass play. This play is well blocked as every man is accounted for. TE Jimmy Graham must block the OLB and then get to the 2nd level. FB Jed Collins has the unenviable task of clashing with ILB Demeco Ryans who would more than likely stop this play in it's tracks. Each side of the line performs kick out blocks to develop the hole.

Sometimes what hurts Ingram is his ability to stay patient and let the play develop. Pierre Thomas is great at this. Ingram gets the ball and runs 100 mph - instead of biding his time until he sees the hole. He actually does a great job on this play which allows his blockers to form at each level. The receivers in the Payton scheme are ready, willing and able - when it comes to blocking.

Now it becomes a battle of will. Chris Ivory is the king of that! Ingram must see the light and get there. He has excellent size, power and agility. He could be special.

This TD run was indicative of what the coaching staff sees in Ingram. He had the agility of Sproles, the vision of Thomas, and the power of Ivory. If he can consistently put together runs like this, the Saints run game will inch back towards the top five.

But even if he is a "bust" like some are predicting. I have no problem with giving the majority of the carries to Pierre Thomas. The Saints brass may have over-thought themselves in the drafting of Ingram in the first place, and now feel pressure to make it work. Ivory and Thomas were already on the roster, and Sproles was a more than capable replacement for the mercurial Reggie Bush. The majority of the characteristics Saints fans hope Ingram develops, Thomas already possesses. This run is illustrative of that:

Saints in an I-Formation

Here we have the Saints in an I-Formation. The threat of the play-action pass makes these type of sets dangerous for over-officious backfield sniffers like we are seeing from the defense. This is another well-designed play where each defender is accounted for. Jed Collins, the fullback, will be counted on to block #43 safety Haruki Nakamura to spring Pierre Thomas loose. The rest is up to Thomas.

The play develops as coach Payton and coach Carmichael drew it up. ﻿#43 Nakamura is the only guy who can stop this play and he has big Jed Collins coming right at him.

Perfection. Nakamura is wincing and embracing for the kick out block. Thomas can get more than a first down if he plays this correctly. (Note how Drew Brees always carries out his fakes, that's why he's the best at play-action)

#30 safety Charles Godfrey, and #24 cornerback Josh Norman are the only ones who can limit this to a first down now.

After getting faked out of his shoes with a football version of the Chris Paul crossover, Norman must now revert to recovery mode.

After giving a stiff arm to Norman midway through this run, Thomas gives an extra special one to Godfrey that sent him darn near into the front row. Pierre Thomas is a bad dude. He deserves more playing time!

The New Orleans Saints have the best offense in the league. It's schemed and executed to perfection. To get back to the promised land, they must establish the run early and often to develop a groove for when they need to close out ball games, or in the rare instance where the passing game is ineffective.

In 2013, I fully expect this to be the case. With a capable offensive line and really good talent in the backfield, there's no reason why the Saints shouldn't be back in the upper echelon. It's time to get back to the basics.