How has the grandson of the legendary Vince Lombardi affected the Saints quarterbacks? Well, he coaches them.

Share All sharing options for: New Orleans Saints' Joe Lombardi: His Own Legacy

Anyone not familiar with the Lombardi name is not a football fan.

You may not be able to disown your uncle who doesn't know Joe Lombardi, however. He doesn't have the notoriety of Vince Lombardi, his grandfather, for whom the Super Bowl trophy is named.

He does, however, have the ear of every quarterback playing for the New Orleans Saints for the last five years, including Drew Brees, who loves him dearly. Drew has 156 touchdown passes under Joe Lombardi including yardage totals of a ridiculous 19,661. That amounts to a passer rating of 101.4. He has, under the tutelage of Joe Lombardi, enjoyed some of the best seasons in NFL history including 2011 where he completed 468 of 657 passes for 5,476 yards with 46 touchdowns and a passer rating of 110.6. It rarely gets better than that for any quarterback in any season in the history of the NFL.

Has Joe Lombardi had an impact on the Saints? Most likely on the same level his grandfather Vince had on the NFL in his career. Has Joe Lombardi moved from beneath the shadows of the Lombardi name? Ask Drew Brees, Chase Daniel, and all Saints quarterbacks in the last five years. Lombardi has worked in the Saints organization for a total of seven years with the first two as an offensive assistant. 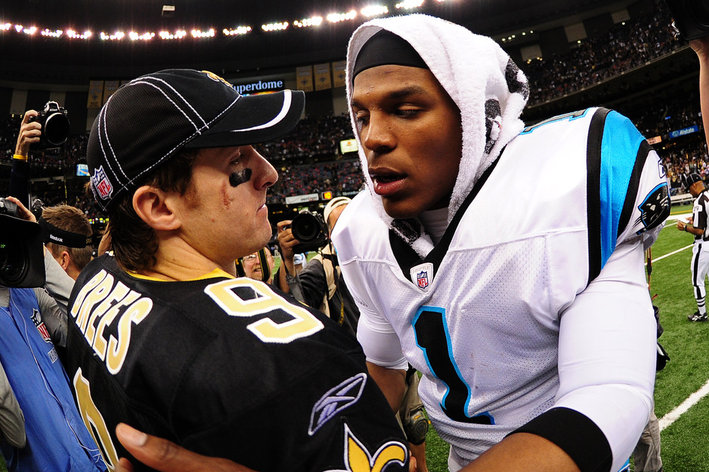 We often forget to enjoy greatness in motion right in front of our eyes.

It is often hard to imagine, if you know Joe Lombardi, that he started on the defensive side of the leather. It may also be impossible to believe that he came from the Atlanta Falcons' defensive side of the leather. In that capacity, his defensive line has 25.5 sacks in 2006. Lombardi has held a great variety of offensive and defensive coaching roles in his career in college and the NFL including tight ends coach, running backs coach, offensive coordinator (college) and even strength and conditioning coordinator (also in college). Joe Lombardi lives and breathes football just like his grandfather.

Joe Lombardi, a college tight end with the Air Force Academy (graduated in 1994), was warned by his family about giving up the Air Force for a coaching career. At that time it was not expected that Joe Lombardi would be the first in the family to hoist the Vince Lombardi trophy. It also came some 42 years after Vince Lombardi won his 5th NFL Championship. Father warning son was a handed down tradition from generation to generation. Still, each generation became involved when fall rolled around. When Joe Lombardi graduated from the Air Force Academy and served his two years, he informed his dad Vince Jr. that he wanted to coach. He was given a key piece of advice: you have to love what you do or you won't make it.

He loved it. He knew it was in his blood. The problem was trying not to live up to his grandfather's legacy and always being compared to the NFL legend. He wanted a clear and fair playing field to work his way up. He paid his dues in every way he could, including working at small colleges such as Bucknell and Mercyhurst, and the XFL before breaking into the NFL with the Atlanta Falcons in 2006. He knew he would never live up to his grandfather's legacy.

"Regardless of how well I do, to win five NFL championships in seven years, that just doesn't happen anymore."

So Joe Lombardi played away from his family ties, not even mentioning them if asked. He wasn't embarrassed by his family name. It was the attention that name garnered that bothered him most.

Nowadays, Joe Lombardi, having the honor of the Super Bowl trophy that bears his family name, is fine with reporting to work every season, playing his part. He has the best job, arguably, of anyone in the NFL by coaching the likes of Drew Brees and the dozens of records the future Pro Bowl quarterback holds, and will for a long time. For a backup tight end at the Air Force Academy, the grandson of the largest and boldest legend in NFL lore, Joe Lombardi sincerely loves his job.