The Saints secondary is in need of a major evolution. We hit the film room to see if newly acquired cornerback Keenan Lewis can spearhead the process.

It's no secret that the New Orleans Saints secondary was in need of a major tune up. I'm not talking about one of those 3,000 mile oil-change type tune ups. I'm referring to the one you get when your 1984 Mercury Topaz leaks oil and other fluids at an alarming rate, and makes noises like someone is playing the bongos all the time.

Man, I need another vehicle.

The acquisition of versatile safety Kenny Vaccaro, first round pick out of Texas, will pay dividends in coverage and from a physicality standpoint. His unique blend of range and ferocity should mesh well with incumbent veteran safeties Malcolm Jenkins and Roman Harper.

Saints Running Game: Back to Basics 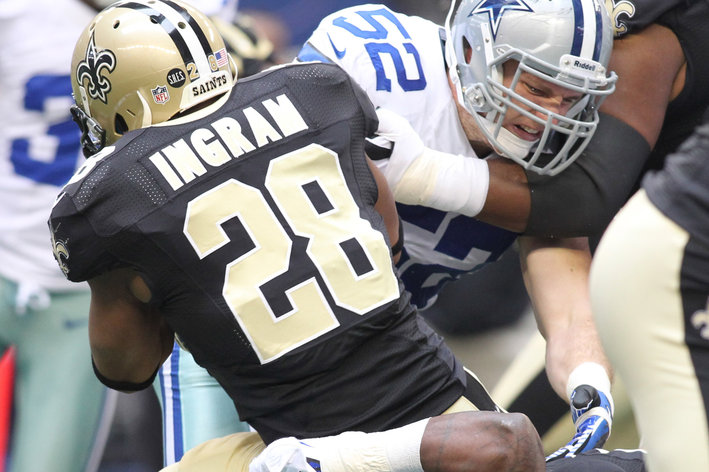 The corners are stocked with pretty good talent that should benefit from a schematic permutation. Going from a zone based scheme, to a physically overwhelming 3-4 attack, coordinated by the irrepressible Rob Ryan, should fit the skill-set of the present personnel on the roster superbly.

The corner who I think might flourish the most under said defense will be the newly acquired Keenan Lewis. And like always, I have film study to support my theory.

New Orleans native Keenan Lewis returns home in an attempt to restore order to the Saints defensive backfield. After working his way up the ranks in the Pittsburgh Steelers' perennially stout defense, Lewis broke out last season with surprisingly solid play. Though he didn't record an interception, his 23 passes defended were good enough to notch him 2nd in the entire league. The fifth year vet will bring a physical presence to the position, while implementing and executing "man-to-man" prowess that will be of necessity in this new Saints scheme.

Here we have a technique that's played a lot in the Rob Ryan attacking 3-4 defense. In my opinion Lewis is at his best when he plays off man coverage like seen here. He's equally adept at playing press man, but seems to relish off man a little more. He's playing inside technique, meaning he'd rather funnel the receiver to the outside which coincides with the safety help he has over the top. Washington is a running a dig route.

He's playing the inside technique hard at the top of the receivers route pattern. This is a difficult technique to play because you are favoring one side predominantly. Lewis has confidence in his ability to open his hips in the necessary direction. He's also confident in his ability to turn and run with any receiver.

Lewis tends to get a little "handsy" down-field in the receivers transitions. This leads to a numerous amount of pass interference calls. But it also lends to his physical nature.

This is the technique that Lewis uses most in man defense. It's called the trail technique. Lewis' goal is to stay in the hip pocket of the receiver and mirror the route. The best corner in the league Darrelle Revis is a master technician of the trail technique.

And make the play he does. Lewis does a great job at high pointing the ball like receivers. I expect him to turn some of these defensed passes into interceptions this season.

It's imperative that New Orleans achieves great corner play in this new scheme. The corners will be in man coverage about 90% of the time. Rob Ryan likes to dial up blitz packages to stop the run as well as the pass. The corners must be able to make opposing QBs hold on to the ball to allow the blitz packages to unfurl.

One of the most successful corners in the Rob Ryan system was former Oakland Raider and current San Francisco 49ers corner Nnamdi Asomugha. Ryan coordinated the Raiders defense from 2004 to 2008. Being able to play man up almost 90% of the time worked very well with Asomugha's skill-set. He had the ability to re-route receivers due to his long and lean frame, which in-turn bought time for the pass rush. I see a very similar skill-set in Keenan Lewis.

Here Lewis is in press man, another one of the techniques used a good amount in the Ryan scheme. He's still lines up in his familiar inside technique. This is a series of illustrations of a redzone battle with Bengals receiver Marvin Jones.

Here's when corner play can get a bit problematic when your technique gets out of whack. Lewis is not able to get a strong jam due to having a weak base. His feet are too close together, and he's using the wrong arm to jam. The NFC South has the best collection of receivers in the league. Lewis will need to be on his 'A' game at all times. And it starts with his technique.

As always, Lewis keeps himself in the play by looking when the receiver looks. I can't harp on this enough. Even when beat, if you locate the ball instead of panicking - you at the very least give yourself a chance.

Keenan Lewis enjoyed a breakout season with the Pittsburgh Steelers this past season. The Steelers defense finished #1 overall in the NFL rankings, and Lewis' play at corner definitely assisted in that. Projecting this forward, for there to be some semblance to the Steelers, Lewis will be counted on heavily. He's coming into the lions den of receiver play in the NFC South. But I surmise, with his athletic ability (4.47sec 40-yard dash), size (6'0, 208 lbs.) and overall corner acumen, the Saints may have found an answer to their No. 1 corner blues.