Since becoming the head coach in 2006, Sean Payton's Saints are 10-2 against the Atlanta Falcons (excluding the 2012 season in which he was suspended). New Orleans' offensive mastermind will return to the sidelines on September 8, 2013, looking to continue his domination over his bitter NFC South rivals.

One would be hard-pressed to find a single National Football League fan that does not recall the night of September 25, 2006. After an entire season spent as NFL nomads due to the devastation caused by Hurricane Katrina, a renovated Louisiana Superdome was welcoming the Saints back to New Orleans. It was Monday Night Football, it was a night of rebirth, and to add to the drama, it featured an NFC South clash between the New Orleans Saints and the Atlanta Falcons.

There's one team that wishes Payton's suspension could have lasted a while longer.

The game marked the first home game for newly hired Saints head coach Sean Payton. Following a dismal 3-13 season in 2005, the Saints had parted ways with Jim Haslett and taken a chance on a candidate with no prior head coaching experience. It is usually said that the two most important factors for the success of an NFL team are a great head coach and a franchise quarterback. The Saints hoped they had struck gold with Payton, finding the great quarterback would be his responsibility.

Although no one could have been certain that Payton was going to pan out as a head coach, there were tell-tale signs that led New Orleans to take a flyer on the former Eastern Illinois University quarterback. As an offensive coordinator, Payton had helped the New York Giants reach Superbowl XXXV in 2000. In 2003, he was hired to the Dallas Cowboys by Bill Parcells as the assistant head coach and quarterbacks coach. He quickly blossomed as an offensive mastermind and by his second year in Dallas, he had been promoted to assistant head coach and passing game coordinator.

As gifted as Sean Payton was as an offensive play-designer and play-caller, he knew that he needed the yin to his yang to really start the reversal of the Saints fortunes: a great quarterback. Just like the Saints had taken a chance on him, Payton gambled on a quarterback recovering from a completely torn labrum: Drew Brees.

On that famous 2006 September night in New Orleans, as the Saints dismantled the Falcons 23-3, the entire NFL world was formally introduced to what was to become one of the most lethal offensive duos in league history: Sean Payton, the "quarterback whisperer" and Drew Brees, his talented student. In only six years together (Payton was suspended for all of 2012, which would have been his seventh year with Brees), the two have undertaken the massive job of rewriting the NFL offensive record books.

With both Payton and Brees at the helm, the Saints NFL offensive ranks have been nothing short of mesmerizing, as further evidenced by the chart below.

With Sean Payton now slated to return to the Saints sidelines in 2013, there is one team that wishes his suspension could have lasted a while longer. Or perhaps, that his rumored off-season departure to another division (the NFC East Dallas Cowboys) had turned out to be true. That team is the Atlanta Falcons.

Had Payton gone to the Cowboys, the Falcons would probably have encouraged him to take Drew Brees along to Jerry World, as both he and Brees have been a relentless thorn in Atlanta's side.

Even more striking is the fact that in the same time span, the Saints are only a combined 12-12 against both of their less successful (as of late) NFC South foes, the Carolina Panthers and the Tampa Bay Buccaneers. 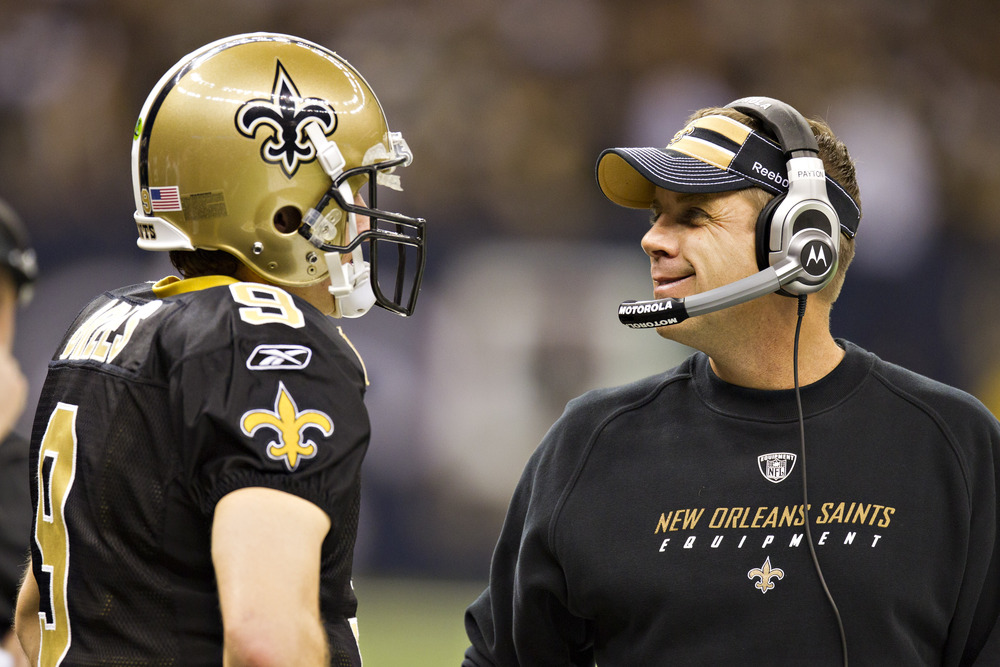 The Reunion of Payton and Brees. Let the greatness return to New Orleans this season.

On September 8, 2013, with his visor carefully placed on his head and his play-calling sheet in hand, Payton again will be roaming the familiar sidelines of the Mercedes-Benz Superdome. He will be looking to right the Saints' ship and return the roster he built to its winning ways. After making the playoffs three straight years and winning it all in 2009, New Orleans posted a disappointing 7-9 mark in his absence.

On September 8, 2013, with their back turned to the turmoil of 2012, Sean Payton and the Saints will be looking for a football rebirth akin to that of September 25, 2006. Which team will get the first crack at the rejuvenated 2013 Saints? You guessed it: the Atlanta Falcons.