The Saints' resident field stretcher may not be the most targeted pass catcher on the roster, but throughout recent history this position has an ascending effect on one of the most potent offensive schemes in the NFL. Find out why Joe Morgan is the next speedster to carry the proverbial torch.

Throughout recent memory, the New Orleans Saints have seemingly been able to locate field stretchers at will, to go with their high-powered, yet intricate offensive scheme. Beginning with Donte' Stallworth, followed by Devery Henderson, and on to Robert Meachem, there was never a void in top-end speedy receivers. Now it's time for the next deep-ball threat to make make his presence felt in the Big Easy. Luckily for the Saints, the talent is plentiful! 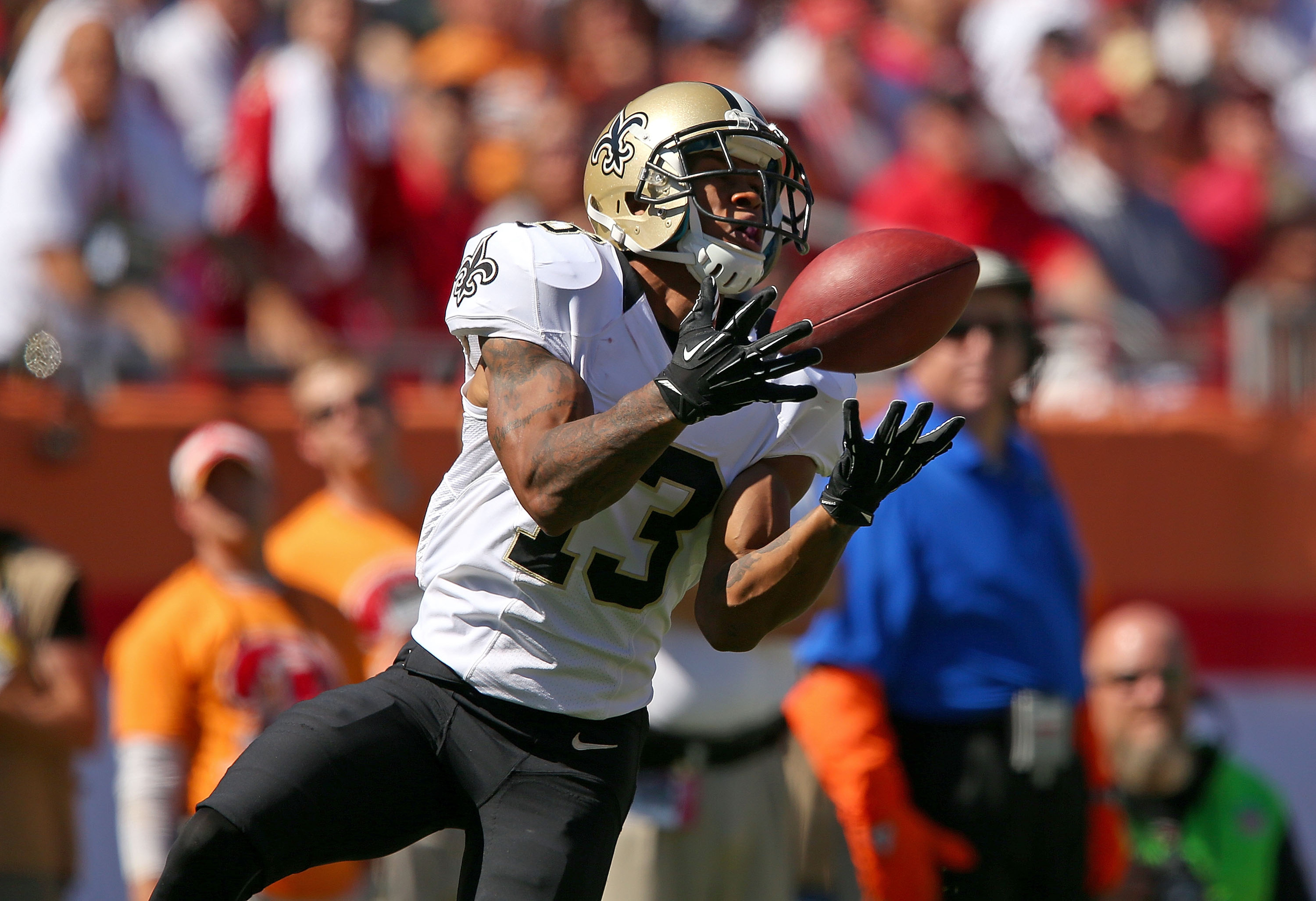 In this edition of Da Chronic's Podcast, Andrew, Dave and Kevin join Ralph to break down Joseph Morgan getting sloppy drunk and using his car as a bed.

The departure of 10 year veteran Devery Henderson this off-season signified the beginning of the end for the classic era of modern day Saints football. As a highly-touted 2nd round pick and local product (by way of Louisiana State University), Henderson manned his split-end spot for nearly a decade (2004-2012), breaking off big catch after big catch.

Henderson effortlessly took over for Donte' Stallworth, whose four seasons (2002-2005) in New Orleans produced 23 touchdowns, many of the long variety. While Henderson didn't produce touchdowns (20) at the same rapid clip as Stallworth, his effect came in the form of timely, eye-opening, explosive plays that always seemed to demoralize the opposition.

It didn't hurt that Henderson was at his best during the magical 2009 season that culminated in a Super Bowl victory. His career highs in catches (51), and yards (804), were a key cog in the Saints march to the top. Henderson embodied everything it takes to play the 'x' position in the Saints hybrid offensive scheme. His ability to be a hands catcher downfield and absorb contact would become the prerequisite to the position. His career average of 17.9 yards per reception is amazing in itself, but his overall presence will truly be remembered for decades to come.

I must admit, I believed that the Saints let one of the NFL's premier deep threats get away via free agency in 2012. Robert Meachem was an absolute gem in the Saints offense for the better part of three seasons. His deep-ball prowess was a thing of grace, poise, and flat out break-neck speed! At 6-2, 215 pounds, Meachem had the size to bully corners off the line, in addition to winning 50/50 balls downfield.

He was the epitome of what the field stretcher position called for in the Saints offense. He could line up and be effective at the 'x' or 'z' positions within a formation, as well as in the slot. His 23 touchdowns in four seasons of tenure were worth their weight in gold. Couple that with an average of 17.5 yards per reception, on an average of 35 catches per season, and you have pure exemplification of what the position calls for in coach Sean Payton's offensive attack.

When Meachem signed with the San Diego Chargers via free agency, I felt as though the Saints' run of finding the superb field-stretcher may be nearing it's end as the players normally ran concurrently for a couple of seasons. But I must say, the thought of this position's demise was prematurely processed, as they may have their best weapon thus far currently on the roster.

I first saw Joe Morgan play for the University of Illinois in a highly publicized inter-sectional game with the University of Missouri. Despite the lack of production, it was evident as to what would be Morgan's 'Bread & Butter' so to speak. His speed in combination with his length were apparent right away (although those aspects weren't fully utilized due to a number of circumstances - most of which being spotty quarterback play from Ian "Juice" Williams). Morgan would go on to transfer to Walsh University after being dismissed to disciplinary reasons in the spring semester of his junior season.

Morgan would prove to be a success in a couple of ways at the lower level program, even reprising his Track & Field prowess - which had seen him become the state long-jump champ in his native Ohio as a high school prep. At 6-1, 190 pounds with 4.4 speed - Morgan was considered a late round prospect in the 2011 draft. Unfortunately, or fortunately (depending on who you are), Morgan went undrafted but landed a free agent tryout with possibly the best team in the NFL for late-round and undrafted players. The New Orleans Saints would provide the opportunity, it was up to Morgan to seize it. And that he did!

With back-to-back touchdowns in consecutive preseason games in his rookie year (a 78 yard punt return, and a 56 yard reception), Morgan guaranteed himself a spot on the team - while showcasing his trademark big play ability. The aspect of his game that will place him among the Saints receiving pantheon when it's all said and done.

After missing his rookie year due to an injury sustained later in the preseason, Morgan got his first taste of authentic NFL game action in the 2012 season. His total of 10 catches were pedestrian to say the least, but his eye-opening average of 37.9 yards per reception only lends itself to the type of ability Morgan has at his disposal.

Seeing as how the Saints have pass threats at every position makes ,having a guy like Morgan even more beneficial. With as good as I believe he can be, he may be only the fourth most targeted pass threat in the offense. This means he will be moved all around the formation in attempts to gain a mismatch. When he lines up in the slot in '10' personnel (4 wr), his ability to separate downfield against the 3rd or 4th best pass defender becomes even more apparent.

Let's take a look at the film to further illustrate:

Joe Morgan in the slot against Antrel Rolle

Here we find Morgan matched up against man defense. Antrel Rolle is a safety by trade, but lines up as the Giants nickel corner against predominante pass formations. A guy like Rolle is a decent corner (excellent safety though), but doesn't have the wheels to stay with a receiver like Morgan.

Right away he underestimates Morgan's speed and uses poor technique in the process. Morgan is in full sprint mode as seen by his track like sprinters stance. Rolle's feet are entirely too close together to even give Morgan a challenge. He would've needed to try to press Morgan off the line in attempt to slow him down.

Morgan has a full step on him and he's really yet to uncoil his full stride. Rolle does have help over the top, but on these vertical routes like Morgan is running - it becomes extremely difficult to defend a guy running full speed right at you.

One aspect I admire about Morgan's game is his innate ability to track the ball downfield and not lose any speed. This is a lot harder than people give it credit for. And as you can see Rolle is long gone at this point, Morgan has him by about five yards. Now only the strong safety Stevie Brown can stop this play from unfolding.

Quarterback Drew Brees gets enough on this throw that Morgan has to lay out to get it. Morgans ability to leap forward and catch the ball is a direct correlation from his long jump days in Track & Field competition. Morgan is an excellent hands-catcher downfield and displayed it several times in 2012. Brown does his best, but that isn't good enough as the combination of Brees to Morgan strikes for a big-gainer.

With athletes like Morgan, the consensus way to play is to be physical with them at the line of scrimmage because their techniques aren't usually up to par with their athleticism. In the small sample size Morgan displayed - he seemed to be further along in his development than most would think.

Technique wise, Saints receivers coach Henry Ellard should get a mention as Morgan runs this fairly simple route as well as you can. He threatens the outside to get Brown to commit to turning and running with him to defend the '9' route or 'go' route as it's universally referred to.

And commit Brown does. If this were a '9' route, Brown would be in great position to defend it as he's on top of Morgan. Morgan must now use his agility to bend this route back inside of Brown to get back on course.

He 'Bends it like Beckham' back to the inside causing Brown to have to reposition himself and throw another press to combat him being out of position. Brown is now to the outside of an inside route.

Morgan has at least a two yard cushion on the route and with a perfect throw it could be a house call.

Brees lays him out again for another 35+ yard reception. This is what happens when athleticism meets technique.

For Morgan to really be worth his weight in 'Gold,' he needs to really get on the same page with Drew Brees. In his 8+ catches down-field - I'm not sure if Morgan ran under any and kept his feet. He was either diving to catch it, or slowing down to let the pass catch up. This could be due to a factor of elements. But to me it points to not enough reps with Morgan to truly be able to judge his speed and develop timing. With the departure of Devery Henderson, the majority of the vertical throws may very well be Morgan's for the taking.

Here we have another illustration on how Morgan has proved his off the line technique. He's matched up here with another speedy corner in former Bucs corner E.J. Biggers.

Biggers tries to get the press and is instantly denied by a 'swim' move from Morgan. Once again this points to excellent coaching Morgan is receiving from coach Henry Ellard. When you have quickness, speed, and agility like Joe Morgan, an effective off the line move can be almost disheartening for defenders and coordinators alike.

Biggers is toast already. He's in recovery mode and Morgan has already built up a two yard cushion. It's up to Brees to put this on the money now.

A great throw here is paramount as we see a laboring Ronde Barber (#20) trying his best to get to the pass in hopes of breaking it up.

Both he and Biggers are too late as Brees lays it right in the basket.

The timing on this play was perfect as it went for a 34 yard TD as Morgan muscled through the attempted tackle of Biggers.

I fully expect Joe Morgan to fill the void left by the departed Devery Henderson. Some will point to other players on the roster possibly stepping up to fill the spot. Rookie Kenny Stills has pretty good speed, but my years of studying his game has him translated out to be more of an intermediate threat that can break the big play every once in awhile ala Saints veteran Lance Moore. Sophomore Nick Toon has a similar skill set to current Saints primary receiver Marques Colston, who is unstoppable in the short to intermediate game due to his imposing physical stature. Fellow second year man Saalim Hakim has similar athletic attributes to Morgan, but he's raw as Morgan was at the University of Illinois.

It's Morgan's time to fill the shoes of his deep ball predecessors. With as strong as this Saints offense is expected to be, he presence should be vividly felt in the form of explosive plays.