Is Drew Brees Beyond Reproach?

Drew Brees is the heart and soul of the Saints on and off the field, but does he get too much of a pass for his mistakes?

Share All sharing options for: Is Drew Brees Beyond Reproach?

Do you consider yourself a Drew Brees apologist? If so, why? There's nothing to apologize for, Drew Brees is great. Not good but great. Drew Brees has elevated the stature and prestige of the New Orleans Saints through his performance on-field and his marketability off-field. For all intents and purposes, the New Orleans Saints are, at this time, synonymous with Drew Brees. Maybe you think the Brees praise is a bit much, or you just enjoy the role of the contrarian. Should that be the case, there are good points to be had there too.

Is Drew Brees perfect? In the words of Manti Te'o "No, far from it. Far ... from it." Although, it's Brees' deficiencies that have helped make him great. Brees has arguably worked harder than anyone in the league to make up for his small stature and relative lack of arm strength. Few have done as much with such "genetic shortcomings" to overcome. Are his crucial mistakes during a game or his anchor of a contract to be overlooked though? No, of course not. 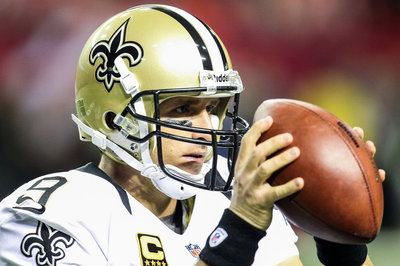 Reviewing Film of Saints vs. Falcons 2012 to Preview Their 2013 Matchups

Drew Brees balances many negatives with his positive aspects. He throws rage-inducing pick-sixes at crucial times. He refuses to take a sack, often forcing a shovel pass while in the grasp of a defender. Although that type of determination has led to amazing heads-up gains, it has also led up to embarrassing interceptions. He sees many passes batted down at the line due to his size, and he's been increasingly criticized for a lack of arm strength on deep routes, leading to underthrown passes.

On the other hand he's set numerous franchise and league records, and stands as the most decorated player in Saints franchise history. He also, more importantly, wins games, compiling a 74-45 record as the starting quarterback for the Saints. It's no coincidence that Brees' arrival secured a championship and heightened expectations in New Orleans. Most importantly to the Benson brain trust , Drew Brees puts asses in the seats.

Should Drew Brees be given a free pass for all of his faults? Clearly not, but name another marquee quarterback who doesn't throw crucial interceptions, have a franchise-hindering contract, or "decline" in his game after a decade-plus in the league. It's not that the Saints and Who Dat Nation should be happy to deal with the negative aspects, but those are the prices that are paid to have the benefit of Drew Brees as your franchise quarterback . You want great, your franchise has to pay for great, because another one will.

To praise Brees for his value to the franchise while acknowledging his shortcomings is not exactly pandering. This Brees parade is closer to the end than many would like to acknowledge. He has arguably three seasons of high-level play remaining, and six seasons of starting-level play left in him if everything, absolutely everything, goes right for him. Although Brees playing the Favre role at the end of his career may be quite unappealing, it is also quite unnerving looking forward to Brees' eventual successor.

Now, Drew is on the back end of his career, and frankly anyone who has earned a contract at the level he has attained is at or past their peak. There are other quarterbacks who do certain things better than Brees, but it can be argued that no one represents the complete package like Brees. Some fans are always looking for something better to come along, but there's nothing wrong with acknowledging the greatness that is on display at the moment.

Brees has earned his detractors as well as his supporters and he, like all athletes, is clearly not beyond reproach. For every mistake and mis-step, Drew should feel the heat just like all of his contemporaries, but many, myself included, are grateful to have had and continue to have Drew Brees not only lead the New Orleans Saints but represent the franchise as well. He is not greater than the team, but the Saints are not a successful team without him, make no mistake about that. As I've stated recently, Drew Brees kept the Saints afloat in 2012, taking a 3-win caliber defense and grinding out 7 wins on passing alone.

Like many others, I am proud to have Drew Brees as the Saints quarterback and leader. Should that make someone an apologist, a homer, or a fool, that's just fine. Drew Brees can't get away with anything he pleases, but he's earned a lot of goodwill during his time in New Orleans. As long as Drew Brees is the quarterback of the New Orleans Saints, they've got a chance to win any and every game, and for that I am grateful. He's not the best to ever play the game, but he's the best to ever wear the black and gold, and for that no apologies are necessary.