Thus far in his short career, Patrick Robinson's play has been met with a bit of scrutiny and uncertainty. We delve into the film room to see if his play truly warrants the type of angst it's drawn. The bus is here for another edition of Uptown's Film School.

For the Saints to fully implement new defensive coordinator Rob Ryan's vast and complex defense, the corners must be very proficient in man-to-man coverage. Ryan's defense has a lot of moving parts along the front line, mostly meant to converge at the quarterback. The corners need to make it so the quarterback has to hold on to the ball as long as possible. I previously detailed how I believed newly acquired corner Keenan Lewis, might be the beneficiary of this new scheme. With as good as I believe he will be for the Saints, there's another corner on the roster with all the prerequisite skills to possibly be even better! 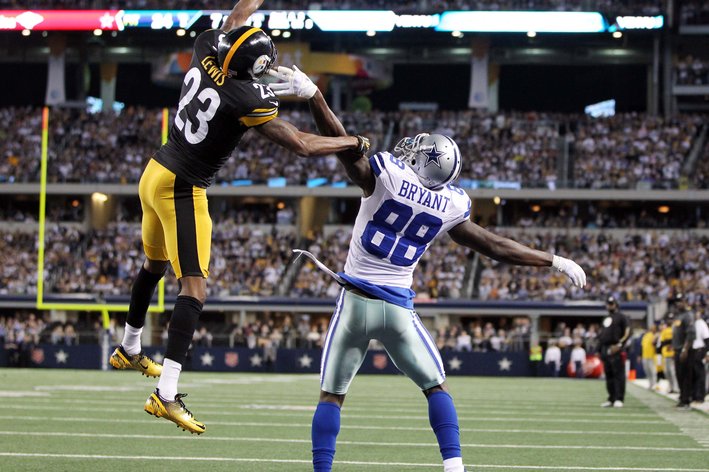 Can Keenan Lewis spearhead a defensive evolution for the Saints secondary?

As a youth, one of my favorite players in the NFL happened to be former Green Bay Packers and New Orleans Saints corner Mike McKenzie. I'd been a fan of corner play ever since Deion Sanders left his mark on an entire culture here in Atlanta, Georgia. Ever since, I've been in love with the fact that one player could make another player disappear from the stat sheet.

Now don't get me wrong, McKenzie was nowhere near the class of Deion Sanders. But the aspect that Sanders lacked in his game, McKenzie excelled at. McKenzie was one of the most physical press corners I've ever seen. When he played in Green Bay with fellow press-corner savant Al Harris, it was a thing of beauty for fans of physical corner play.

The tenacity that both McKenzie and Harris played with is one of the reasons I value current Saints corner Patrick Robinson. I've recognized his great skill set ever since I scouted him at Florida State University. At 5-11, 195 pounds, Robinson has the perfect build to excel in physical play. He's built a lot thicker than most corners, and is very similar in physical stature to all-world corner Darrelle Revis of the rival Tampa Bay Buccaneers. His 4.3 sec. in the forty-yard dash just adds to the allure of his skill-set. He has the complete makeup of a shutdown corner.

Heading into his fourth season, I feel as though this is a make or break time period for Robinson. As a first round pick in 2010, most felt as though Robinson and Super Bowl hero Tracy Porter would lead the Saints in tandem for many years to come. After two seasons, Porter left via free agency, which in turn showed a clear delineation on who was the future number one corner. In his first season as the Saints primary corner, Robinson's play was a mixed bag to say the least. His 64 tackles, three interceptions (one for a 99-yard TD!) and one forced fumble were pretty good. But it was his 18 passes defensed (6th in the NFL) that really stood out. As a matter of fact, between Keenan Lewis and Patrick Robinson, the Saints now have the number two and number six ranked players as far as passes defensed in the entire NFL, respectively.

As much positive play as Patrick Robinson displayed in the 2012 season, one could argue that it was an equally tough season overall for him. Robinson was beaten numerous times for big plays, with some resulting in highlight-reel touchdowns. To his credit, the Saints had him follow around each team's top receiving threat the majority of the year. This is why I only judge players off of game film, and never look at "premium stats" to make my argument. Patrick Robinson's stats overall would probably look a lot better if he just played a specific side, where he could essentially play against the teams worst receiving threat a good deal of the time.

But having him follow around Dwayne Bowe (Chiefs), Hakeem Nicks (Giants), Steve Smith (Panthers), Demaryius Thomas (Broncos), and Dez Bryant (Cowboys), can make the best of the best seem ordinary at times. For that simple fact, I think he deserves to be judged on a different curve than most corners. There's no substitute for competition in this great game we call football. Those with more difficult tasks, outweigh from a competitive standpoint, more than "premium stats" can measure. I work 100% off of game film.

So lets hit the film room to see truly what Patrick Robinson's strengths and weaknesses are.

Here is one of the toughest covers in the NFL. Patrick is in man coverage with Giants receiver Hakeem Nicks. Notice the base that Robinson plays with. He's sturdily built, and accentuates it by staying in this crouching stance, which gives him the ability to react to whatever side the receiver goes . He usually doesn't press, but he can if he has to. His style is to try to beat the receiver to the spot. Nicks is running a fade route.

Right away Robinson is in perfect position. I noticed that he's at his best when the coverage calls for him to turn and run with the receivers, which works well considering his 4.3 second track speed.

As soon as Nicks turned his head, Robinson turned to locate the ball as well. He trusted his technique! When he does this, he's one of the most exciting young corners in all of football. He has unparalleled athleticism, combining it with great technique - makes him extremely dangerous.

Going through a full year as the primary corner, where he shadowed most of the best receivers football has to offer, will pay dividends for Patrick Robinson in 2013. With the arrival of Keenan Lewis, it's possible that defensive coordinator Rob Ryan will have Robinson play the right corner spot exclusively. Putting Robinson on the team's second best receiving threat a good deal of the game, may prove to be worth it's weight in Gold. Incumbent starter Jabari Greer, is a decent player in my opinion. I believe he lacks the size and athleticism at this point in his career to be a starter. I'd let him platoon at nickel with talented second year man Corey White, until White locks down the position full time. What was a clear weakness of the team last season, the secondary may end up being it's strength!

The route I noticed that Robinson struggled the most with was the slant route. He often used poor technique at the top of the receivers route, which often left him susceptible to this rather common route.

Here we have Patrick in his familiar stance. I know he's comfortable with playing man without the press, but given the proximity of the offense on the field, it's usually wise to try to get a jam as the offense has way less room to operate in.

Not only does Robinson negate the jam, he commits to an outside release before Nelson even shows his hand! Nelson must've had mind control over him or something, because all he did was shuffle his feet.

Nelson hits Robinson with a jab step, he might as well hit him with a real jab because Robinson is defending this as if he's disoriented. Nelson now has an easy path the his route.

The best thing Robinson can do now is grab and hold on for dear life because this is a touchdown.

At this point in his development Robinson is better downfield where his athleticism takes over, rather in short area defense where it's usually about sound technique.

Here's another example of this.

Here's is one of the the absolute toughest covers in the league in Cowboys receiver Dez Bryant. He's equally as dominant in the short game as he is catching intermediate and deep passes. This was by far the worst game Robinson had in 2012. This particular play happened after Bryant scored on a 58 yard bomb over Robinson. Robinson doesn't look confident at all in his stance. He's too upright.

Being too upright is a no-no against a guy as strong as Bryant! Robinson attempts to press him at the line, but is shoved away for his services.

On a quick slant, the play happens so expeditiously that sometimes it's hard to recover. Once you're beat on this play you don't need to panic, you just need to make a sure tackle to limit the gain.

Well Robinson did none of that. He whiffs on the recovery tackle and gives up another 58 yard TD!

In a Week 16 game against the Cowboys, the Saints had Patrick Robinson shadow Dez Bryant the entire game. For his efforts, Robinson gave up 9 catches for 224 yards and 2 TD's to the budding Cowboys superstar. In the division in which Robinson resides, there are three to four receivers with similar skill-sets to Bryant. Games like this can either hurt Robinson's confidence, or put good film out for Robinson to study to correct his deficiencies. I'll go with the latter over the former.

As I previously mentioned, I value how Patrick Robinson defends passes downfield. There aren't too many - if any - receivers that can flat-out beat him deep. He usually does a great job locating passes while engaged in deep coverage. With Robinson, it's all about the technique at this stage of his career.

Like usual, Robinson is shadowing one of the top receivers in the league. Dwayne Bowe from a physical standpoint is like a modern day version of Terrell Owens. At 6-2, 225 pounds, he is as physical as it gets. Bowe is running a 9 route aka a "Fly" pattern.

This is right in Robinson's wheelhouse so to speak. His play recognition is extremely good, which coincides with his determination to beat receivers to the spot.

When Robinson can beat you to the spot, shield you, and locate the ball - the offensive coordinator might as well get another play ready. Because 9 times out of 10, the play is his to make.

Robinson has extraordinary leaping ability and likes to high-point the ball when defending passes. Here his physicality rears itself, as as he's able to shield off a much bigger Bowe and beat him to this pass. Outstanding!

I surmise that Patrick Robinson is in for a breakout year. His first three years in the NFL have been a bit of a mixed bag. As the result of thorough film study , I see a corner with elite athleticism that will be coached up by defensive coordinator Rob Ryan and his staff. He has good tackling ability, speed, size and overall really good corner acumen. Putting him at the second spot will pay dividends in conjunction with newly acquired corner Keenan Lewis. Some will call for veteran corner Jabari Greer to start opposite of Lewis, I believe Patrick Robinson will be a much better player and fit in the new Saints defense. With an improvement in the short area game, Robinson would have all the necessary tools to his hear his name bandied about for pro bowl honors. The sky's the limit for this former first round pick!