New Orleans Saints first Round pick Kenny Vaccaro addressed the "elephant on the field" yesterday via Twitter. And what he said could be a preview of his first season in the NFL.

In the first week of camp, if you have been following the smoke signals in the Saints thread online, from friends, or even at training camp in person, you may have heard a little something about the impact this guy Kenny Vaccaro is making.

It isn't much. A scuffle with TE Jimmy Graham. There might have been a pasting of RB Pierre Thomas the other day. He seems to have a bad attitude or a chip on his shoulder. Maybe he is trying to impress so he makes the 53-man roster or a starting job. Just call it showing off. Needless to say, if it wasn't for back channel communications, we may not know any of this at all. 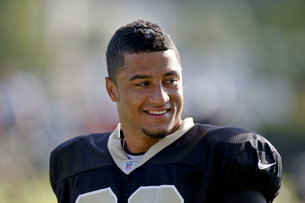 Then, we all wake/sober up and realize you must be living under a rock not to have heard about safety Kenny Vaccaro's contributions on defense the last week. He apparently is competing with Mark Ingram in the kill on site department. Mark Ingram collides with Victor Butler in OTA's; Butler out for the year with a torn ACL. Kenny Vaccaro plants the beast of beasts himself Pierre Thomas in training camp the first day of full pads. Mark Ingram blows up Jon Vilma's nose leading to stitches thereafter. Somewhere in the same zipcode, Kenny Vaccaro scuffles with Jimmy Graham on a catch and attempted strip of the ball. In short, unless someone sedates him, Vaccaro is bent on damaging something. He even found it necessary to address the conversation via Twitter today in what follows is his statement: 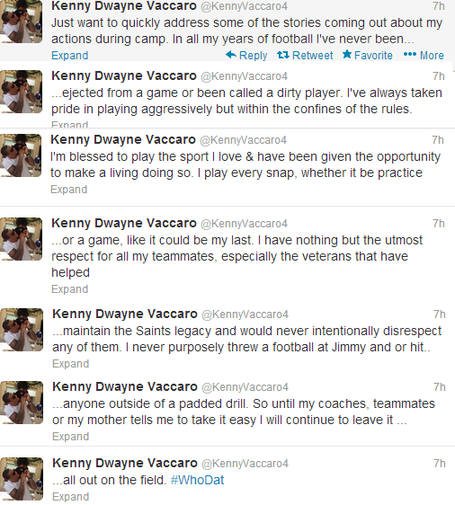 I digress here for a moment. I agree with 110% of everyone who wants the Saints to win this year and improve massively on defense. They need to find that heat, swagger, and attitude that gets to the offense on the other side of the line. They need to get physical and compete for that pigskin on every play. It is refreshing to have Vaccaro's attitude on this defense. And I don't find Vaccaro to be a dirty player in any sense of the word. This isn't powder puff or flag football.

But, at the same time I also worry, as many of us do, that being too physical at this stage, may get one of our own hurt. Is it worth it to be so abrasive in the first week of training camp? I don't want anyone, including Drew Brees to be shrouded in bubblewrap but I certainly don't want injuries to hit us as they have the Broncos, Eagles, and Seahawks so far. My response to his tweet again via Twitter was the following:

Whatever side of the conversation you find yourself on, we know it is necessary to have a beast in the mix. Not your normal, 300-pound hard charger coming off the edge or up the middle. That guy is always a beast. But the attitude-on-Red-Bull is how we want to roll. Kenny has blatantly stated he is not going to settle down basically until he is arrested and imprisoned. Barring Goodell at the Mercedes-Benz Superdome tomorrow, I think he continues to wreak havoc.

Other Twitter comments have alluded to hoping 'someone jumps up and kicks his ass' to 'whatever he does, don't slow down and make sure to give all of that attitude to Matt Ryan at the Dome on September 8th', to 'he is guaranteed to rack up penalties and fines this coming season'.

However you feel about this, and I am sure my tweet above has you rolling your eyes as I am used to, we all hope and expect our 90 men get a chance to compete and push each other for the final 53. I live and work in Alabama so I don't have the luxury of making it to Saints training camp as I would love to so I follow along on Twitter and Canal Street Chronicles.

In any case, safety Kenny Vaccaro is going to ball out this season barring he is healthy. He will also bring that attitude the Saints need to find again. Whatever your opinion, buckle up because if this week of training camp is any indication, it's going to get brutal in a hurry.