It was a night of positives and negatives for the Saints as they first team shakes off the rust in their first preseason game of the year.

Share All sharing options for: Saints Preseason Game Recap of 17-13 Win Over Chiefs

Well that was okay, I guess. The Saints got the win over the Kansas City Chiefs last night by a score of 17-13, so there's that. But I certainly wasn't blown away by anything I saw, with the possible exception of Thomas Morstead's punting ability. Which appears to have improved. Who knew that was even possible for the Pro Bowler?

But the defense. Ugh, the freakin' first team defense. It felt soft, just like last years version, after the Chiefs drove 80 yards down field for a touchdown in the opening stanza on their way to a 10 point lead. I was instantly transported back to 2012. Sure, the defense didn't give up any big plays on that drive, instead giving up a lot of the underneath stuff. As it turns out, however, a crapload of successful small plays still add up to a crapload of yardage. Who knew? 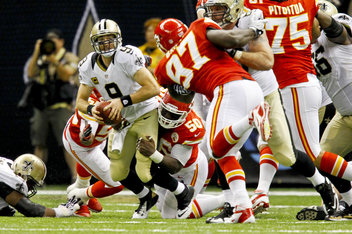 Complete postgame coverage and everything you need to know about the Saints' first preseason win over the Chiefs.

Alright, I'm being a bit dramatic. It wasn't all doom and gloom for the defense. They eventually tightened up and made a few plays. Jay Richardson made a name for himself last night with a fumble recovery - forced by Glenn Foster - and quite a few other notable plays. That sack by John Jenkins in the second quarter was brilliant, exactly what I expected to see from this new defense. Chase Thomas put together a good series at the end. And, as noted before, no big plays. Honestly, that's a big improvement.

Special teams, on the other hand, really did suck. No question about that. In addition to a 55 yard punt return, the Saints also gave up kick returns of 79 yards, 31 yards and 26 yards. In a word, that's unacceptable.

Even the 11-year-old girl who sang the National Anthem beautifully wasn't quite on her game, singing "land of the brave, and the home of the ... brave."

Meanwhile, on the other side of the ball, your starting offense was a little rusty. Drew Brees and company needed to play into the second quarter just to score a field goal and not feel so crappy about the night. I thought these guys were supposed to torch opposing defenses this season, fueled by a post-Bountygate rage in a final act of vindication? I didn't see any of that. Nope.

Still there were positives to be found there as well. The second and third team guys picked up the slack. Luke McCown proved himself to be a plenty capable backup completing 18 of 28 for 216 yards and 2 TDs with 1 INT, giving the Saints the lead in the 3rd quarter. Khiry Robinson looked pretty damn good running the ball late in the game. And the wide receiver position continues to be as deep and talented as it's ever been, with Nick Toon (4 catches, 66 yards), Andy Tanner (3 catches, 59 yards) and Preston Parker (4 catches, 43 yards, 2 TDs) all playing very well. I can't explain why but despite his two touchdowns, I'm still not exactly impressed with Parker.

Kenny Stills, on the other hand, is an enigma. You take the good, you take the bad, you take them both and there you have... Kenny Stills. He's got the talent; raw talent. You can just see it. But he's young, and prone to mistakes. This game defined all of that. On the first target to Stills, he was able to get good separation at the last minute, with a sneaky, veteran-like push off the defender, but couldn't haul it in and make the catch. He redeemed himself by making a great adjustment on a back shoulder catch for 22 yards shortly after. But then fumbled a hand off. Maddening! I want to love this guy, but he's making it difficult. Can he be trusted? At this point, I think the answer is no.

It's all good, though. I'm not one of those reactionary fans who's ready to write off the whole season. It's just the first preseason game. I get it. And I'm willing to focus on the positive while forgetting the negative.

Here are a few more quick takes from the game last night: