The defense on the opening drive of the Saints first preseason game conjured up nightmares of last season's defensive debacle. Before fans jump off the proverbial cliff, check into Uptown's Football Science class to get a little education, X's and O's style!

After spending the whole off-season studying how the Saints' personnel would mesh with new coordinator Rob Ryan's defensive scheme, the day arrived where I could finally stop speculating. I charted the opening defensive drive of the Saints first preseason game against the Kansas City Chiefs - where the starters were prevalent (the few that weren't injured), then reversed course back to the notes I previously produced. Despite the poor showing, it's very vivid as to what Ryan is trying to accomplish. Once it comes all comes together, the results will be magnificent!

This was a standout quote from my piece entitled "Schemed to Death: Rob Ryan's Defense." In this piece I went back and looked at the many different formations of Rob Ryan's defense that he coordinated for the Dallas Cowboys. In retrospect I didn't take into account that the Cowboys had 3-4 personnel already on the roster from Bill Parcells' and Wade Phillips' tenure that directly preceded Ryan. To reproduce what he had previously, he would have to use a bit of ingenuity with what he was working with personnel wise for the New Orleans Saints.

The 80-yard opening drive and score by the Chiefs on Friday night sent Saints fans into a frenzy! As disheartening as it is for fans, one must take into account that they are, well, fans. Right away I could see that it was going to be hard for the Saints to stop the Chiefs' scheme on that opening drive. 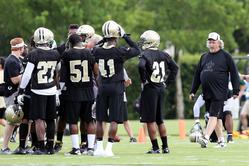 An introduction to Rob Ryan's 3-4 defense. Required reading for all Saints fans.

It didn't take long for the Chiefs to realize that both guys in charge with defending the edge of the front seven weren't up to snuff in the athletic department.

In the Saints base defense, Ryan went with veterans Will Smith and Jay Richardson. This is all sorts of wrong. First of all Will Smith is entirely too large. Sorry fans. I heard the talk about him losing weight, and even saw some fans emphatically defend his move from defensive end to stand up outside linebacker. Hopefully seeing him operate in space will put the defenders to bed on that topic.

I never thought of Will Smith as a good athlete even for a down lineman. His best attributes are his size, power, and rush move repertoire. Having Smith chase speedy backs and athletic tight ends around in space looks like a scene out of the three stooges or something. I maintain that Will Smith would be the ideal 3-4 defensive end (aka 5-technique) where those aforementioned attributes would be trouble for anyone in his way. Ryan played Smith on the strong side where the tight end resides.

Due to injuries Ryan went with Jay Richardson at the backer spot that plays opposite the tight end. Richardson looked more athletic than Smith, but still looked like he would be better suited to operate on the interior as well. Ryan coached Richardson in Oakland where he was a defensive end in a 4-3 defense. At 6-foot-6, 280 pounds, Richardson is sort of a tweener, which Ryan likes. He's stout in weight, but it's distributed pretty evenly due to his abnormal height for the position. In normal situations he would have Richardson fill both the 5-technique and outside linebacker role. Richardson is great against the run.

Ryan seems to be fixated on playing Smith in space, but I believe he has two better options that would have made some serious noise in this game. Junior Galette is the quintessential backer who would be an ideal fit in Smith's role. He's way more athletic than Smith and has an extremely quick first step. He also has a pass rush move set similar to a young Dwight Freeney. I believe he will start in the 3-4 base opposite of Smith when he returns from injury.

On the other side, Martez Wilson could be a flat out star in Jay Richardson's role (which will be occupied by Galette). He might be in the top five in the entire NFL (lineman/linebackers) as far as athleticism goes for the position. He is adept at coverage and playing in space from his time in college. I have no doubt that this kid will make an impact for Rob Ryan. This is what this alignment looked like against the Chiefs.

This is how it looked in the base set when the Chiefs ran the sweep from the shotgun. The Chiefs were running a two tight end set most of the drive. They put the second tight end in the slot to take advantage of his athleticism. #97 Richardson ended up lining up over the slot. Instead of lining up #94 Jordan at the 5-technique which would be on the outside shoulder of the tackle, they position him head up on the tackle. They had #91 Smith on the outside of the tight end, but a little closer than normal. The ILB's have to man the gaps which puts a lot of pressure of them. They will have to bang heads with lineman a lot in this look.

As I suspected, this will be one of the more fluid spots on the defense. Ryan will use a bevy of different alignments, packages, and personnel. You can expect 6 or 7 different lineman to play on any given drive.

As much as the fans want to know about the 3-4, they better not forget that Ryan employs a ton of 4-3 as well. He often likes to do this on base downs where he feels a run will be called.

The nose tackle (aka 0-technique) was occupied by #77 Brodrick Bunkley, as well as #75 Tyrunn Walker. Both these guys fit the Ryan mold. He likes for his zeros to be versatile in the mold of Cowboys stalwart Jay Ratliff. Akiem Hicks (#76) will rotate at the nose but will play a ton of 5-technique as well. Cameron Jordan (#94) may end up being the best player on the entire defense. He always reminded me of Will Smith in the fact that I thought he was too large to be a 4-3 defensive end. So playing him more on the interior will highlight what he does well. Fans will see how special this guy is at his new position. Additionally, in four man fronts, Will Smith will slide back to his normal hand-in-the-dirt defensive end spot. Which looked like this:

Base 4-3 vs Pistol HB Sweep

Although this is a normal 4-3 the alignment is a little different in the Rob Ryan scheme. Most defensive tackles in this scheme would line up at a 3-technique (outside shoulder of the guard). Akiem Hicks is at the normal position. Brodrick Bunkley is lined up head over the guard. This leaves #50 MLB Curtis Lofton and #54 OLB Will Herring to man the gaps. Normally #51 Jonathan Vilma would play the role of Herring, but he missed this one due to injury.

Note: the illustration below is of the base 4-3 not necessarily of the offensive play it was run against.

This 4-3 set also highlights the ability of Rob Ryan to play to the strength of his personnel. The ILB's are very plentiful on this team as Jonathan Vilma, Curtis Lofton, and David Hawthorne are all very good players. Playing a 3-4 all the time would leave one of these guys off the field. With Ryan rotating alignments this ensures all the good players on the defense get a chance to shine.

This is a very important part of the puzzle. I predicted that #32 Kenny Vaccaro was drafted to play in the three safety set that Rob Ryan loves to employ on clear pass indicators - and I was correct. Although a safety, Vaccaro has very good man-to-man coverage skills. This allows incumbent safeties #41 Roman Harper (strong safety), #27 Malcolm Jenkins, and #25 Rafael Bush to serve duty in the normal positions. He will lean heavily on this set, and I love it!

Roman Harper is a good in-the-box safety due to his physicality. He's a liability in space though. Jenkins and Bush have range and can play the back half zone. Jenkins is a physical tackler (when he takes the proper angle), but he is speedy and can cover a lot of ground. He will always be the single high safety.

The corners I'm not feeling. The opening drive started with #33 Jabari Greer playing the primary corner spot. I don't think he has the athleticism to be a No. 1 corner but I trust Rob Ryan so I'll go with it. I'd rather see #28 Keenan Lewis play that role, with injured Patrick Robinson playing the second corner spot. I'd also like to see #24 Corey White get a chance to mix it up, which I'm sure he will.

Ryan plays seven defensive backs in some sub packages. The corners are playing some serious off man, which actually looks more like zone on Keenan Lewis' side. He lines up almost 9 yards off the receiver. I hate that type of coverage as it only takes a quick smoke pass to the receiver and he has at least a 5-6 yard cushion to make Lewis miss and get a first down or more. This particular package is my favorite. Here's how it looks:

Roman Harper will always lineup on the side with the tight end as he has him in man coverage. Vaccaro will always line up man-to-man with the slot. Bush plays deep to the side that Harper is on. Jenkins is giving help over the top to Lewis and Vaccaro if necessary. There are three down lineman. Usually a run stuffing nose tackle, and two of the nest pass rushers. Both ILB's are in zone coverage for anything underneath.

I know people are unhappy with the preseason's opening drive defensively. Saints fans are looking for improvement and that looked very much liked the defense last season. The tackling was off, and the defense looked slow (well one person in particular). They got 'small balled' all the way down the field in the opening drive. Ryan's defense is most effective against the big play - and he needs athletes up front to guard against the short game. This system is very complex, probably in the top three as far as complexity in the NFL. Meaning it will take time for the Personnel to gel in the new positions within this new scheme. With Ryan rotating at a rapid pace, players love to play for him - as most will get a chance to see the field.

As for the first preseason game, it certainly didn't help that Galette, Wilson, Robinson, and Vilma were all out with injury. These are going to be four prominent names that you will hear most game days. Galette and Wilson are particularly important so you don't have to see this as a fan.

Will Smith in zone coverage against Chiefs in 2013 preseason

If you're not following me on Twitter, what are you actually doing?