The NFL preseason is now fully underway and the excitement is palpable in every football-starved fan as real football is now a mere two to three meaningless games away.

However, the much maligned four preseason games aren't as useless as some might think. For many young players, these are the games that will determine whether they have a future at the highest level of professional football. As veteran starters play a limited number of series, rookies and free-agents are battling for precious, scarce, life-changing roster spots.

For each team, although limited, there are jobs available every preseason. The harsh reality of a collision sport like football is that injuries occur frequently and the NFL train does not stop to wait for the wounded. What is the old cliché again? Oh yes: next man up!

For the New Orleans Saints, one need that has become glaring as we near the middle of training camp is that of a deep threat wide receiver. In his tenure in New Orleans, Sean Payton has always favored a wideout who will stretch the field, take the top off the defense and allow the possession receivers and the running game to flourish.

In the past seven years that role had been filled admirably by wide receiver Devery Henderson, who was joined in the deep threat department by Robert Meachem from 2008 to 2011. The San Diego Chargers signed Meachem as a free agent after the 2011 season, as the Saints were grooming a promising young replacement in wide receiver Joe Morgan.

Henderson, seemingly on his last leg last season (he had only 22 receptions for 316 yards and a lone touchdown in all of 2012) was let go as a free agent this off-season and signed with the Washington Redskins.

Last season, Joe Morgan emerged as the heir apparent to Henderson as the Saints "burner" at wide receiver. Although Morgan recorded only 10 receptions, he averaged an outstanding 37.9 yards per catch, with his longest reception being an 80-yarder.

With Morgan now on the injured reserve list (IR) after suffering a torn meniscus and a partially torn anterior cruciate ligament (ACL) during the Saints scrimmage earlier this month, all eyes turn to rookie wide receiver Kenny Stills, that the Saints drafted in the fifth round out of Oklahoma.

There's no denying that Stills is fast. He ran the 40-yard dash at the 2013 NFL combine in an incredible 4.32 seconds. However, playing wide receiver in the NFL takes more than speed, even for one expected to run mostly deep go-routes early in his career.

In his first official NFL game last Friday night when the New Orleans Saints faced the Kansas City Chiefs for both teams first preseason game, two specific plays exemplified the promise that Stills represents for New Orleans, but also why he has a long way to go towards earning the number three wide receiver spot behind starters Marques Colston and Lance Moore.

I had thoughts of calling this section "Bad Kenny," but that would have been a bit unfair, as on the play we are about to examine, Stills does everything right, except for the most important part: catching and holding onto the ball.

Stills (#84, white jersey at bottom of the screen) indicated by the yellow arrow, is matched-up on the outside with one of Kansas City's best cornerback, fifth year pro Brandon Flowers (#24, red jersey) who is indicated by the red arrow. The screen shot shows nine Chiefs players in the defensive formation, which means that they are playing with two deep safeties. 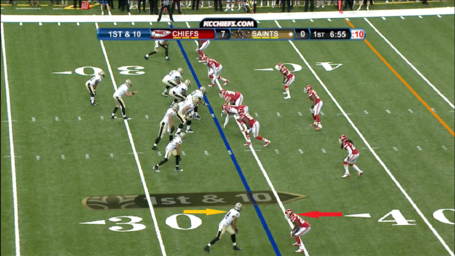 1) The mastery of Drew Brees, who, although he knows he is going to throw to Stills on the right side (bottom of the screen), stares right down the middle of the field to hold the deep safety in the center and give Stills a true one on one matchup with Flowers.

2) Stills shows a very good burst right at the snap, as Flowers doesn't have time to jam him at the line of scrimmage and disrupt his route. 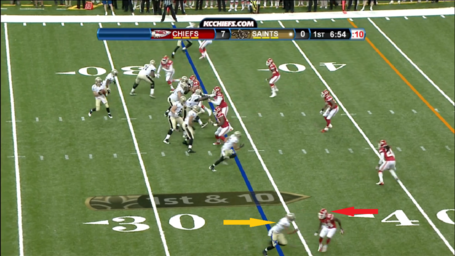 Stills runs his go route perfectly. Flowers quickly turns his hips and pursues, but he is about half a yard behind Stills as the ball comes in. That's all it takes to be "wide open" in the NFL. Brees' eye-fake worked impeccably, as the deep safety (indicated by the green arrow) is nowhere near the ball as it arrives. All the young Saints wide receiver has to do is catch the ball. It looks like he's got it for what would be about a 40-yard completion. 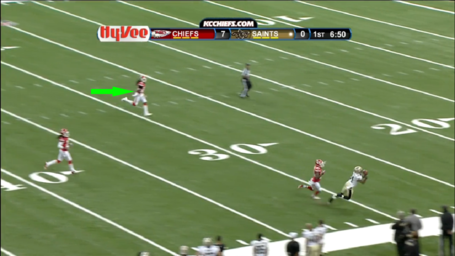 Brees and Stills did everything right on this play. Well, almost everything; Stills fails to secure the ball and a beautiful 40-yard reception goes by the wayside. Two plays later, the Saints had to punt the ball.

With the margin of error being paper-thin in the NFL, these are the kind of plays Stills will have to start making on a consistent basis if he wants to secure the job as the number three receiver on the New Orleans Saints 2013 squad. 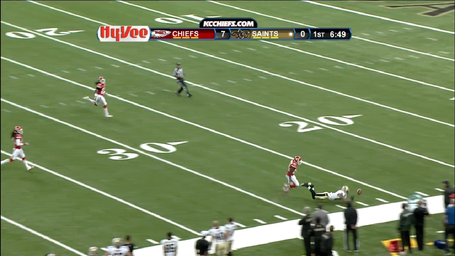 The next play displays the type of performance that Saints fans are hoping to see much more often from Kenny Stills. Good route, good hands and great footwork on the sideline to finish the play.

This time, Stills (#84, yellow arrow) is lined up alone on the right side of the offensive line and matched up with Chiefs third-year cornerback Jalil Brown (#30, red arrow). Kansas City is playing with a single deep safety as they are looking to bring some pressure on Drew Brees from his blindside. 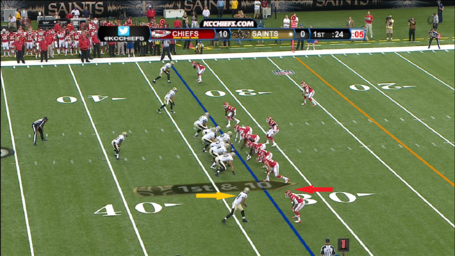 Stills runs a quick stutter and go route towards the sideline, as Brees is looking to go for a back-shoulder throw. The success of this play, especially with the defense bringing some pressure, hinges on the receiver not getting jammed at the line of scrimmage as the ball has to come out quickly. The timing between the receiver and quarterback here is crucial.

From the get-go, Stills has Brown beaten, as the chiefs cornerback is caught flat-footed when the ball is snapped. At the time Stills explodes out of his stutter steps, Brown is not fully out of his pre-snap stance. 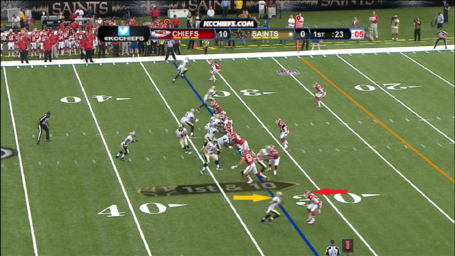 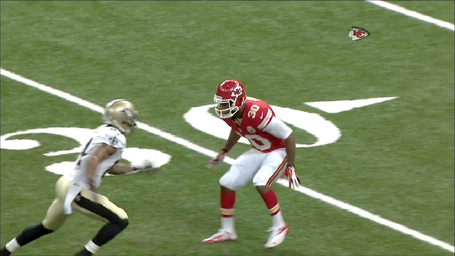 At this point, Stills has won his one on one matchup with the Chiefs cornerback. Brown, who has his back turned to the quarterback, is now trying to extend his hand and push or hold Stills. That's his last recourse to try to avoid the inevitable: the ball is going to be thrown behind him, to the receiver's shoulder closer to the sideline, forcing him to make a 360 degrees turn if he is to have any chance at an interception. He doesn't have a chance. 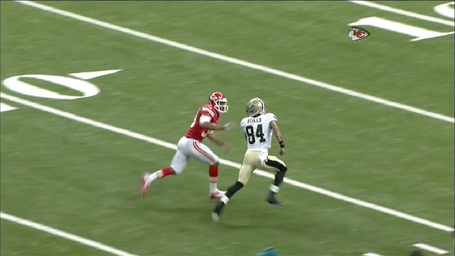 Veteran move by the rookie:

This is a great sight to see for Saints fans. As Brown extends his hands towards him, Stills slows down to adjust to the ball that is now in the air and in one motion, subtly uses his left hand to prevent Brown from impeding his imminent leap to catch the football. 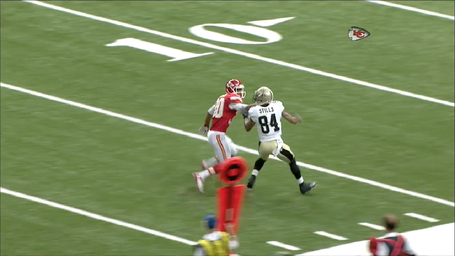 Stills catches the ball securely with his hands away from his body, rather than letting it come to his chest. He eventually lands with both his feet inbounds on the sideline to complete the grab for a 22-yards reception and a Saints first down. 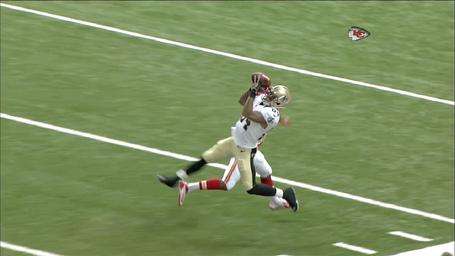 Admittedly, Kenny Stills is a very talented young wide receiver. He also is a rookie, who will go through growing pains as he learns the ropes of Sean Payton's complex offense. He has a long way to go when it comes to getting used to life as a wide receiver in the NFL, where a half-yard separation from defensive backs is often all you get.

If Stills' play Friday night against the Chiefs is any indication however, he might just be the right candidate to be the next deep threat in the multifaceted New Orleans aerial attack. Saints fans sure hope he is.