The former Fighting Illini defensive lineman is having a strong start to the preseason. Will he become the next big play maker as an undrafted free agent?

The 2013 NFL Draft was an exciting weekend for Saints fans. We witnessed the selections of five talented players, four of whom are basically guaranteed a roster spot (Vaccaro, Armstead, Jenkins, and Stills) and could possibly be important pieces to this season's roster. When the undrafted free agents were announced, the Who Dat Nation were excited to see what potential prospects Chase Thomas and Kevin Reddick could provide for a linebacker group that desperately needed some competition.

What's Up With This Guy? 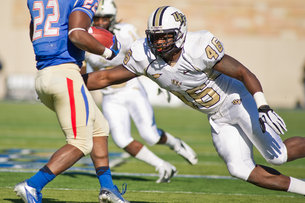 Ray Shipman has barely seen the field through training camp and two preseason games. And his time is running out.

Among the undrafted free agent list was a defensive lineman from Illinois. There wasn't much talk about him, but in the past two weeks, he has received plenty of attention from Saints fans. Glenn Foster is hungry.

His college stats will not wow you, but his physical ability will. Foster was not invited to the NFL combine, but still managed to have a vertical jump (39.5 inches) and broad jump (10 foot, 9 inches) at his pro day that would have been among the best of his position at the combine. His 29 reps of 225 is also pretty solid, while running a 4.8 in the 40. The man has all of the physical tools and so far, it's looking like Rob Ryan is getting the most out of them.

As a member of the Fighting Illini, Foster played a lot of DT on rushing downs and DE in passing situations. In two seasons as a starter at Illinois, he had 3 sacks. In two preseason games as a Saint, Foster has 3 sacks.

Is Foster this talented or is this just a hot streak by a player who will never be more than a bench player?

As of now, Glenn Foster leads all players in the preseason with 3 sacks. No other defensive lineman has more tackles (7) than Foster. He has had more opportunities than some of the other players, but Foster is doing something right.

"He's playing exceptionally well," Saints coach Sean Payton said. "I don't think that's made it difficult (for the coaches to making a decision). When you get a player that comes in a rookie class as an undrafted free agent and is playing like he is and well enough to make the team, that's a good deal. That's a good sign.

"We are pleased with how he is playing. He has been very consistent. He's explosive. He is a player who after the draft a handful of teams were interested in, and fortunately for us, we were able to get him to a contract."

Glenn Foster could be an excellent guy to rotate in and out of the defensive line. At 6-4, 285 pounds, he may end up in a rotation with Akiem Hicks. If he continues to impress with a strong game against Houston this Sunday, there could be no doubt that Foster will not only make the roster, but also get some playing time.

Are you drinking the Glenn Foster Kool-Aid?